In Kevin Drum’s latest feature, he imagines a bleak future where robots begin taking all of our jobs. Though he predicts this will happen about three decades from now, the concept obviously isn’t new. The word “robot” first appeared in a 1920s Czech play (see below), which concludes with human destruction. The plot line started to seem more realistic when robots began performing complex industrial tasks. By 1961, a giant robot arm called Unimate took a welding job on the General Motors factory floor. Throughout the last century, robots—both imaginary and real—have fascinated us with their skills, quirks, and eerie human-like qualities. The timeline below highlights some of the most memorable machine moments and personalities. 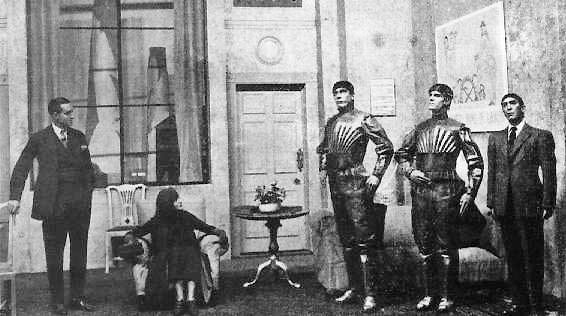 A scene from a R.U.R production. Wikipedia

The word robot first appeared in 1921 when Czech playwright Karel Capek’s drama R.U.R. (Rossum’s Universal Robots) premiered in Prague. The story follows the employees of a factory producing cheap and efficient robotic labor. While Capek is widely credited for the word’s invention, he attempted to correct the record in a 1933 article for the Czech newspaper Lidove noviny:

It was like this: the idea for the play came to said author in a single, unguarded moment. And while it was still warm he rushed immediately to his brother Josef, the painter, who was standing before an easel and painting away at a canvas till it rustled.

“Listen, Josef,” the author began, “I think I have an idea for a play.” “What kind,” the painter mumbled (he really did mumble, because at the moment he was holding a brush in his mouth). The author told him as briefly as he could. “Then write it,” the painter remarked, without taking the brush from his mouth or halting work on the canvas. The indifference was quite insulting.

“But,” the author said, “I don’t know what to call these artificial workers. I could call them Labori, but that strikes me as a bit bookish.”
“Then call them Robots,” the painter muttered, brush in mouth, and went on painting. And that’s how it was. Thus was the word Robot born; let this acknowledge its true creator.

The Czech word “robota” is roughly translated as servitude or drudgery. Tragically, the robots go far beyond their servant role, eliminating every human on Earth except the factory’s old architect, Mr. Alquist. With the building manuscripts torched and his mind going, Alquist hopes the machines can figure out how to reproduce themselves and live on as “the shadow of man.”

In a utopian city in the future, workers toil below ground to keep things running smoothly above. With a potential worker uprising looming, the city’s founder instructs his lackey scientist to construct a robot that looks like one of the workers, Maria, so it can crush the rebellion. The metallic star of German filmmaker Fritz Lang’s famous silent film Metropolis inspired many other movie depictions of robots, including C-3PO.

Prolific science-fiction writer Isaac Asimov penned the Three Laws of Robotics in his 1942 short story “Runaround.” The rules demanded machine obedience and non-violence, tenets that his fictional robots and many others have since puzzled over in countless books, films, and essays. Here, Asimov gives a brief breakdown:

The British neurologist and robotics expert William Grey Walter fashioned a pair of the first autonomous machines capable of complex behavior in 1948. Nicknamed Elmer and Elsie and constructed with old alarm clocks, the tortoise-sized bots’ moves were dictated by light and touch sensors. They were particularly fond of women’s legs, often drawn toward the reflective nylons.

The first industrial robot Unimate, a giant 4,000 pound mechanic arm, took its place in the assembly line at General Motors in 1961. Mostly limited to die-casting and welding, Unimate was the first hint of an impending encroachment of machines on the manufacturing realm. 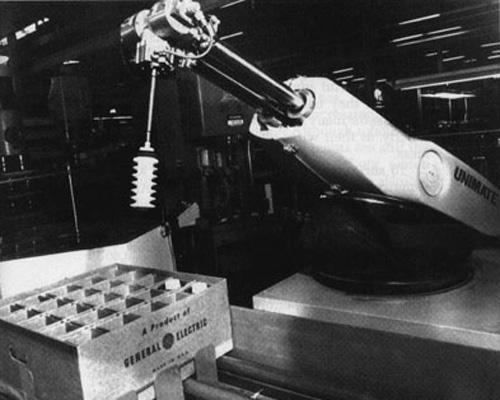 Unimate on the factory floor Robot Hall of Fame 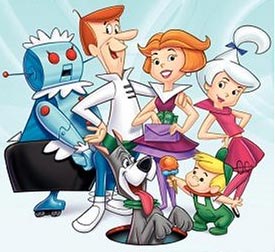 Set in the futuristic dreamland of 2062, “The Jetsons” home is dutifully cleaned by their robot maid Rosie. In 2011, Keith Wagstaff at Time wondered why it had taken so long to manufacture a real Rosie. Wagstaff notes that artificial intelligence just isn’t far along enough to complete complex physical tasks without some human assistance, and configuring your environment just so a robot can do chores seems like a time suck. But as processing power continues to increase exponentially, our Rosie might be here sooner than you’d think.

HAL (Heuristically programmed ALgorithmic computer) 9000 depicts the evil side of artificial intelligence in Stanley Kubric’s 1968 cult classic 2001: A Space Odyssey. In charge of guiding the spaceship Discovery One on its voyage to Jupiter and adhering to the crew’s orders, HAL famously defies astronaut David Bowman’s request to open the pod bay doors. “I know that you and Frank were planning to disconnect me,” HAL says, “and I’m afraid that’s something I cannot allow to happen.” Check out this eerie exchange below:

Developed at Stanford Research Institute (now SRI International), Shakey emerged as the first robot capable of planning out how to execute complex tasks. In 1970, Life magazine ordained it the “first electronic person.” 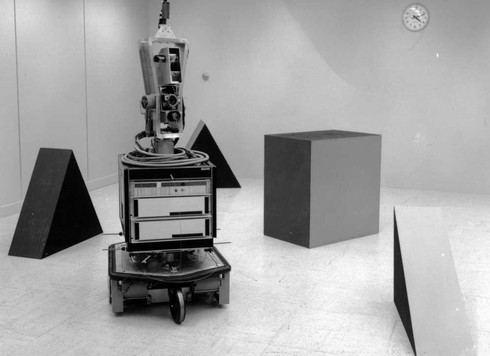 R2-D2 and C-3PO stole the show in George Lucas’ Star Wars: A New Hope. The pair of droids was so popular that they were later cast in an anti-smoking PSA. For a compilation of scenes set to Bill Withers’ “Just The Two of Us,” look no further:

Due to the vast intelligence of Marvin’s planet-sized brain (approximately 50,000 times more intelligent than a human), he suffers from dark depression and boredom. Marvin can easily solve “all of the major mathematical, physical, chemical, biological, sociological, philosophical, etymological, meteorological and psychological problems of the Universe except his own, three times over…” The character was invented by British humorist Douglas Adams for the BBC radio program “Hitchhiker’s Guide to the Galaxy” and later explored in the popular book series and 2005 film. For an introduction to his melancholy, check out the compilation from the recent movie below:

Chinese restaurant Two Panda Deli in Pasadena, California, recruited a pair of Japanese robot waiters, Tanbo R-1 and Tanbo R-2 (for $20,000 each), to deliver Chow mein to customers and bust out disco moves. Police radio interference compelled them to splatter orange chicken and whirl furiously around in circles. Complex customer requests were also often met with the terse reply: “That’s not my problem.” 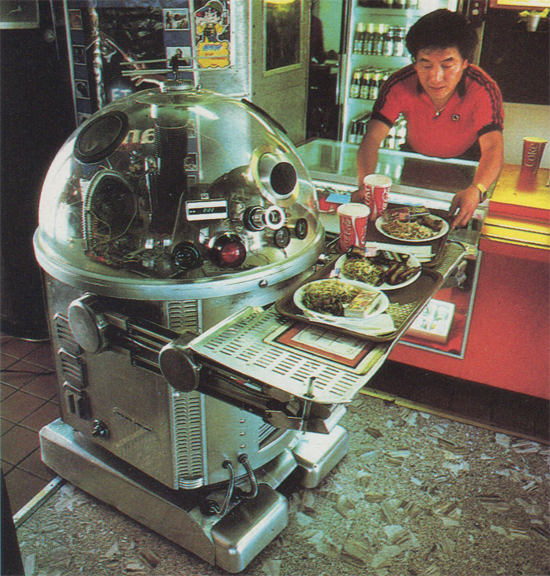 In The Terminator, Arnold Schwarzenegger stars as a cyborg killing machine from the future programmed to go back in time, find, and kill Sarah Conner in 1984 Los Angeles. The original trailer:

The 1980s classic Short Circuit veered away from the robot-as-murderer plot, and focused on the more delicate side of the machine. After a dramatic lightning strike, experimental military robot Number 5 gains real emotions and intelligence, escapes from his lab, claims the name Johnny 5, and, with the help of a new friend, avoids a burdensome reprogramming. Here, Johnny 5 learns about the meaning of death:

The Autonomous Benthic Explorer (ABE), a deep-sea-diving scientific vessel used to locate, map, and better understand hydrothermal vents and volcanoes, was launched on its first expedition. Its travels along the ocean floor produced data that has helped scientists explain the development of the Earth’s crust. The ship was lost off the coast of Chile in 2010. 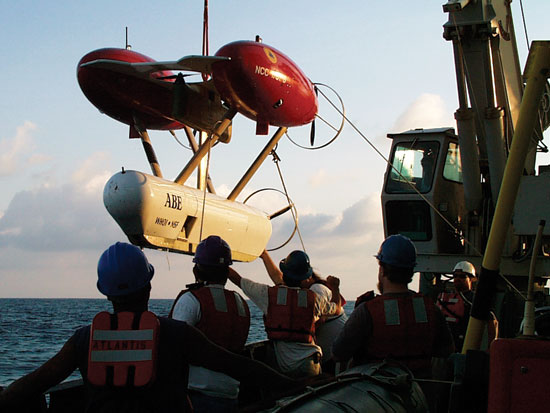 Robotics company iRobot began testing its Packbot, which was eventually used to search for survivors in the 2001 wreckage of the World Trade Centers and Pentagon. The robot was also deployed to defuse road-side bombs in Iraq and Afghanistan. More than 3,500 are currently assisting US soldiers. To learn more about battlefield robots, check out our recent story here. 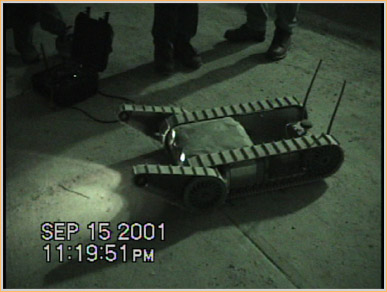 A Packbot in the aftermath of the September 11th attacks iRobot

The FDA granted approval to Intuitive Surgical’s da Vinci Surgical System in 2000. During surgeries, a doctor uses a combination of foot pedals and joysticks to move the operating equipment, which can make very precise incisions. It is commonly used for hysterectomies and prostate removals.  The da Vinci system performed approximately 450,000 procedures in 2012.

After perfecting bomb disposal, iRobot naturally moved onto household cleaning. The company introduced the roving automated vacuum cleaner Roomba in time for the 2002 Christmas season. People like it so much, they dance (in the commercials, at least):

After a massive human exodus from Earth, Pixar’s Wall-E traverses the badlands cleaning up the garbage left behind. It’s a tremendous job for such a small bot:

IBM supercomputer Watson embarrassed Jeopardy! champions Ken Jennings and Brad Rutter by taking home the most cash during their three-day matchup. Watson had quite a run, and even got to say, “‘Chicks Dig Me.'”

After Nevada DMV officials went for a joyride on desert highways and down the Las Vegas strip, the state became the first to issue a driver’s license to a car, instead of a human. Armed with video cameras, radar sensors, lasers, and a computer system, the Toyota Prius was developed by Stanford artificial intelligence expert and Google Vice President Sebastian Thrun. Driverless vehicles are expected to hit the public market by the 2020s.

The Pentagon’s Defense Advanced Research Projects Agency (DARPA) and robotics company Boston Dynamics programmed Pet-Proto, an autonomous humanoid robot capable of jumping onto and off of ledges, carefully avoiding holes in the ground, and climbing stairs in a laboratory environment.

DARPA and Boston Dynamics also successfully tested the Legged Squad Support System (LS3), a warthog-like automaton designed to lug up to 400 pounds of army equipment over war-torn terrain. It responds to verbal commands and can pursue a unit’s leader.