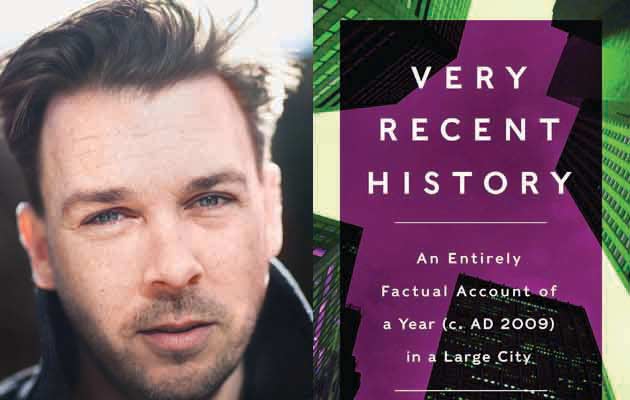 When he first landed in New York City, Choire Sicha—a 41-year-old Brooklynite whose rambunctious prose and mastery of digital media have earned him cult status among the web-obsessed—was just a broke and inexperienced kid. But he eventually caught a break, getting hired to edit Gawker during the news and gossip site’s early days, and returning as managing editor following a stint at the New York Observer. In 2009, after a subsequent gig at Radar dissolved, Sicha cofounded The Awl, a website that quickly became popular for its penetrating culture writing and dry wit. He also began researching his nonfiction debut. Out in August, Very Recent History follows a group of young New Yorkers struggling to pay rent and find love in the shadow of Wall Street’s collapse—a sort of gay male version of HBO’s Girls that mirrors Sicha’s own past exploits.

Mother Jones: Shall we talk about Girls?

Choire Sicha: You know, I’m supposed to have some way to explain my book, so I started saying it was like Girls meets Philip K. Dick, and everyone was like, “Oh, that sounds great! I have no idea what you mean.”

MJ: How did it come about?

CS: I wanted to make a book about what it was like to be young at that moment, so I found a bunch of people and started talking to them regularly. A number of them fell by the wayside. People are very hard to talk to and to have long, unfair, lopsided relationships with.

MJ: How much time did you spend with them?

CS: It ranged. I was as nosy as possible. The thing is, I don’t like being intrusive. I tend to probably be more sneaky.

CS: Like, “Hey, can I come look through all your mail?” And then, you know, just sort of being the creepy guy hanging out and listening.

MJ: Well, you have an excuse to be following that person, or mining through their life.

“We complain how the millennials are lazy or spoiled, but they’re incredibly articulate and intelligent.”

CS: At least I’m not a gross, pointless stalker.

MJ: What about this book as a point of projection?

CS: As someone who has been young, and lived in New York when I was young, and made 600 dollars a month when I moved here. I wasn’t prepared for the world of work—I didn’t go to college, I didn’t have a lot of marketable skills or experience. I think Barbara Ehrenreich talks about that a lot, too. The ways I acted out when I was 25 and the ways I had to suppress the things going on around me when I was 25 were substantial.

MJ: Everyone you followed seems to be cheating on whomever they’re with, and borrowing money all the time.

CS: I think some people will read this book and be like, “Oh, these kids are horrifying and they need to be put down.” I just can’t judge, because I was just as bad.

MJ: I liked the part where everyone is discussing Truman Capote’s article about hanging out with Montgomery Clift.

CS: We complain how the millennials are lazy or spoiled, but they’re incredibly articulate and intelligent. They’re constantly reading and writing and communicating in a way that my generation never got to. I mean, we had zines. Zines were narcissistic, egotistical, one-sided publications!

MJ: How’d you land at Gawker?

CS: There was an element of terror involved. People would email me, being like, “Please get my name off of there!”

MJ: The Awl is totally different. What compelled you to start it?

“People should write books like Woody Allen does movies: We should all put out a little book every year and not spend too much time on it.”

MJ: But The Awl‘s been successful?

CS: In its own funny way. We just hired a CTO, so it’s growing up. It’s a weird company, but we have a good time.

MJ: Do you have any interest in writing fiction, or science fiction?

CS: I’ve written a couple science-fiction stories and I keep submitting them to people, and they’re literally like, “No. Pass.” I work a lot, I write a lot, and to be submitting to journals that I’ve never heard of that maybe have 2,000 subscribers and having them be like, “Get lost!” It’s good for me.

CS: I think people should write books like Woody Allen does movies: We should all put out a little book every year and not spend too much time on it. Capitalistically speaking, it’s a worthless endeavor. A couple of them make a lot of money, and a couple of them [publishers] get regard for publishing. The rest is sort of like gambling.