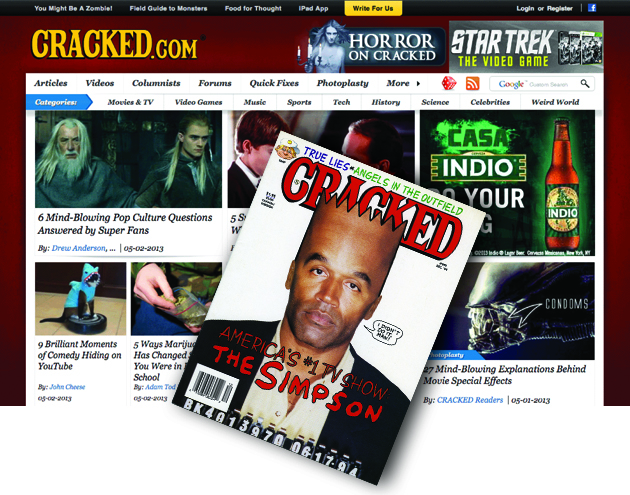 I can still remember the cover of Cracked magazine staring up at me from beside the toilet of a teenage cousin’s bathroom—it competed with Mad for the adolescent boy readership, but was always its ugly stepchild. So imagine my surprise when I discovered that, while the print magazine is kaput, Cracked.com has become the unlikely outlet for some of the most uproarious and sage social commentary on the internet. Amid the inevitable boob, zombie, and videogame fare, you’ll find thoughtful pieces like “5 Ways Modern Men Are Trained to Hate Women” and “8 Racist Words You Use Every Day.”

First published in 1958, Cracked struggled in recent years. In 1999, it was sold to the parent company of the National Enquirer, which resold it the next year. It lost money and was sold again in 2005—the relaunch lasted all of three issues. “It was just such a spectacular success that you didn’t hear about it,” jokes Jack O’Brien, editor of the empire’s only surviving appendage. 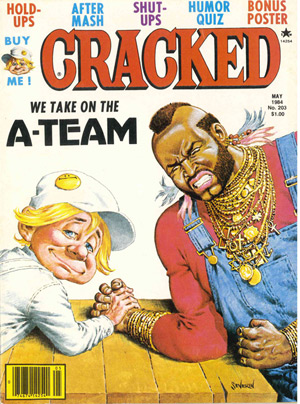 Yet by striking the right balance of pop culture, bawdy humor, and keen intellect, O’Brien’s crew has built Cracked into one of the web’s top humor destinations. “We said to the internet, ‘Hey, if you liked that list of the best celebrity sideboob photos, you might also like this list about influential nonviolent protests through history!'” senior editor Jason Pargin (pen name David Wong) told me. “And the internet said, ‘Sure!’ We’re as surprised as anyone.”

Mother Jones: So how is today’s Cracked different from the magazine we grew up with?

Jason Pargin: You know how Hugo Boss used to make uniforms for the Nazis, but they don’t any more? Well the evolution of the Cracked brand is even more significant than that. The old magazine was great in its time, and home to many prolific and talented individuals, but where the old magazine was kid-friendly parodies and cartoons, the modern site is long-form and, hopefully, smart commentary on pop culture, science, and history packaged in a thick layer of wordy fart jokes.

JP: We’re told that the readership is mostly young males, but we work really hard to keep Cracked from being a site for dudes. No one should feel like it isn’t for them. That said, we do write a lot about video games and superheroes, so you can fill in your own stereotypes.

MJ: What makes something a Cracked piece?

JP: Cracked is less about covering a topic than it is about exploring all of the ways the universe proves both ridiculous and amazing, if you think about it long enough.

MJ: How do you explain your resurgence?

JP: We’ve grown to become the largest comedy site on the internet, unless our numbers are lying to us. The largest English-language site, anyway—there may be some incredibly hilarious state-approved Chinese comedy site that kills us in the stats. The idea that people on the internet don’t like to read has always been ridiculous. That’s all they do. A teenager may read 500 text messages a day, and God knows how many Tumblr posts and Facebook updates—thousands and thousands of words. What people on the internet don’t like to read are boring things. So we never questioned whether or not there was a market for long-form content, it was more about making sure we were presenting it in a way that made sure the reader never had a chance to get bored.

MJ: I notice that you use the “X Number of Things That Do Y” formula a lot. Is that because the internet loves lists?

JP: We don’t want to come off as pretentious—we once published an image gallery called “Boobs on Things That Don’t Normally Have Boobs,” and would do it again. But we would like to distinguish a Cracked list from most internet lists. The average user is buried under so many links and headlines that they like being told exactly what they’re getting: “14 Pictures of Cats Wearing People Clothes.” Cracked uses the internet’s love of lists to ease people into reading about subjects they otherwise would never have cared about. Last year we did an article called “The 6 Most Aggressively Badass Things Done by Pacifists,” which is sitting at 865,000 pageviews.

MJ: You’ve run a bunch of pieces like “The 8 Stupidest Defenses Against Accusations of Sexism” and “5 Things Nobody Tells You About Being Poor.” Are you basically doing progressive agitprop?

JP: We try to never promote any policy or politician or party, mainly because that makes for bad comedy. We’ve also done “5 Ways People Are Trying to Save the World (That Don’t Work),” which walked through everything wrong with organic foods, recycling, and hybrid cars. In “5 Mind-Blowing Facts Nobody Told You About Guns,” a central point was that gun violence is actually way down, and that crimes committed with assault rifles barely register in the stats.

If there is a larger agenda, it’s “Train yourself to question everything.” We mocked the weird environmentalist message inserted into the Day the Earth Stood Still remake and pointed out that taking out the Death Star would only create a power vacuum and send the galaxy into chaos. And why are the droids in Star Wars sometimes treated as independent sentient beings, and other times treated as property? I suppose we do try to be on the side of poor people, minorities, and other marginalized groups, but that’s mostly because we don’t want to be dicks.