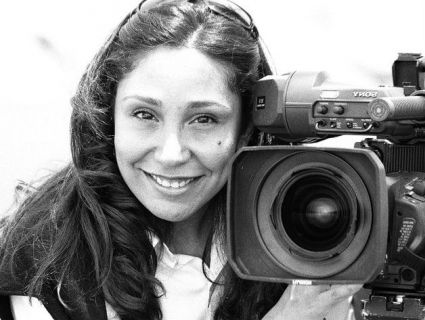 The critically acclaimed new movie Wadjda is not just the first feature-length motion picture filmed exclusively in Saudi Arabia—it’s the first one made by a Saudi woman.

“I wanted to make a film that is transparent about the culture—because I know a lot of people don’t know what it is like in Saudi Arabia, or what Saudi Arabia looks like,” says Haifaa Al Mansour, writer/director of the film. It tells the story of a precocious schoolgirl named Wadjda (a character inspired by Al Mansour’s niece and played by first-time film actress Waad Mohammed), a Riyadh native who dreams of bucking social convention and buying a bicycle for herself. The movie has been making international news lately not so much for its festival honors or its acclaim, but for how it was made, and the hurdles that had to be cleared.

The Kingdom of Saudi Arabia is not going to be mistaken for a hotbed of social liberalism or political reform any time soon. Conditions and rights for women in the country have long been a disaster and moral outrage, although there are signs of some possible liberalization down the road. The kingdom operates as a repressive and strictly, and often brutally, religious society. There is virtually no Saudi film industry to speak of—no public funds, no film festivals, barely any infrastructure—and movie theaters are almost entirely banned. (The Arab nation does pour a lot of money into television and soap operas, however.)

“People want to know how you make films in a conservative culture like [Saudi Arabia],” says Al Mansour, whose previous work includes the short film The Bitter Journey and the documentary Women Without Shadows. “My mother asked me—and she’s Saudi—’How did you film that?’ My mother! And she’s from a small town, and she understands the culture.”

Most movies are hard to make; this was a whole different realm of tough. It took five years for everything to fall into place, with investors skeptical that she could pull it off. (The film was partially funded by Rotana, the production company of Saudi prince and media mogul Al Waleed bin Talal.) Al Mansour also had trouble landing producers. “I sent emails out that I was working on this film to hundreds of companies, and nobody answered,” she says. She finally received a reply from Gerhard Meixner and Roman Paul, a pair that had produced Waltz With Bashir and Paradise Now, both Oscar-nominated films. “I nearly had a heart attack when I opened my email that day! I could not believe it,” she says.

Fortunately, the Saudi government approved the project, in part because a woman making a feature-length film in the country was so staggeringly unprecedented that there simply wasn’t a rule against it. Shooting on-location served up its own special round of frustrations. Al Mansour was sometimes forced to direct the cast and crew over the phone due to Saudi restrictions on men and women mingling and working together in public space. Using a walkie-talkie, she directed certain scenes while sequestered in the back of a van so she wouldn’t be seen giving orders to her male crew members.

All this stress appears to have paid off and then some. Along with the critical praise and good buzz, Wadjda is Saudi Arabia’s first-ever entry for best foreign language film at the Academy Awards. “This is a sign that things are improving,” Al Mansour says. “Pop culture and music and film are definitely changing in Saudi.” She tells me she is especially reassured by the fact that “a lot of young Saudi filmmakers make a lot of short films,” such as the 2006 documentary Cinema 500 km, helmed by director and newspaper columnist Abdullah Al-Eyaf.

Al Mansour cites the sketch-comedy series Tash Ma Tash (Saudi Arabia’s Saturday Night Live, essentially) as another encouraging sign, and sees much hope in the “revolution of information” and technology that manages to touch even the most tightly controlled of societies. “When you visit Saudi, there are beautiful cars, beautiful buildings, people are courteous—you don’t see camels and donkeys in the street,” she says. “And kids have access to pop culture all the time…When Waad came to audition [for the role of Wadjda], I wanted to see if she can sing…So she started singing Justin Bieber, in beautiful English. She doesn’t speak English; she only speaks Justin Bieber. It’s a different world now.”

“If you make things that work within the frame and try to capitalize on the little space you have, you will find support in Saudi.”

However great her optimism, Al Mansour doesn’t have any illusions about her home country. “You cannot do philosophical ideas or question religious ideas [in your films]—they will not allow that,” she says. “But if you make things that work within the frame and try to capitalize on the little space you have, you will find support in Saudi.” Her film is the 39-year-old director’s narrative technique of making a statement “without being radical, and not being loud.” That kind of careful calculation is precisely what led her to make a bike the central object in Wadjda’s story.

“It’s about movement, it’s about celebration…[but] a bicycle is not intimidating. It’s a toy,” Al Mansour tells me. “And I know talking about women’s rights is very controversial, so I wanted to give [Saudi viewers] something that is a little softer, so they don’t shun it right away.”

As the eighth of 12 children in a small-town, middle-class household in east coast Saudi Arabia, she grew up watching Hollywood pictures on video, internalizing the three-act structure and other standard methods of storytelling. “It was harder for me to find French cinema, Iranian cinema, and anything independent, though,” she adds. “It’s harder to find, say, an obscure title coming out of Sundance—there is no place for them.”

As for her early American influences, the Coen Brothers, in particular, made an impression on a young and hungry Al Mansour. “I liked them because I liked their dialogue,” she says. “I’m not a big fan of violence, but with them it’s okay. They do it right. They’re just very smart in their depiction of human nature…I love A Serious Man, for example. The quirkiness and all that.”

Today, Al Mansour lives in Bahrain with her American husband and their two kids. For all the international attention and plaudits she’s received for her groundbreaking new film, she currently has no intention of taking her eye off the ball. For her next big project, she already knows where she’s headed.

“Back to Saudi,” she says definitively.