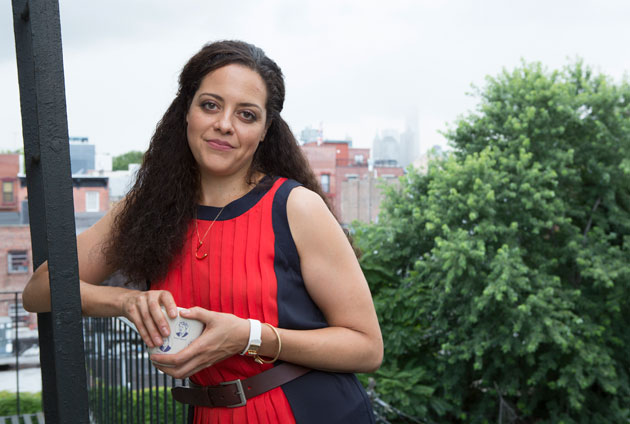 Anna Holmes, unlike some of her contemporaries, never considered “feminist” a bad word. As a mixed-race girl growing up in a liberal California college town, she was obsessed with Sassy and Glamour—”back when it was still feminist.” She pursued writing gigs at glossy women’s magazines after college, but quickly tired of their formulas: “Their point,” she says, “is to create insecurities and then solve them.”

In 2006, she was tapped by Gawker Media to create Jezebel, a site for women interested in both fashion and how the models were treated. She built it into a traffic behemoth, with 32 million monthly pageviews and beloved features like Photoshop of Horrors and Crap Email From a Dude. Since leaving Gawker in 2010, Holmes, who recently landed a column in the New York Times Sunday Book Review, has kept busy compiling The Book of Jezebel, an encyclopedia of lady things with more than 1,000 entries, from bell hooks and Bella Abzug to Xena and zits. The book goes on sale October 22.

Mother Jones: When I first opened the book and landed on “Patriarchy,” I laughed, because the full entry read: “Smash it.”

Anna Holmes: Some things you don’t need to spell out.

MJ: How did you pick the entries?

AH: The first step was free-associating words and concepts. I don’t want the book to feel academic, so there’s not gonna be a whole page on “cisgender”—but it is an entry. I sat down with a big dictionary at one point, but a dictionary will have Plato, and not Althea Gibson—someone I forgot to put in the book. I would not call the book comprehensive, but that’s because I’m a perfectionist.

MJ: Who or what else do you know you missed?

AH: Wendy Davis, the Texas politician. The book had to be done by last November, and she had not achieved national prominence yet.

MJ: A lot of the photos I’d never seen before. Josephine Baker in a dress that’s basically 10 beads strung together: Oh my god!

AH: I know! Or a picture of Flannery O’Connor grinning. I think of her as tortured and dark but I didn’t want to use the picture everyone had seen. Imagery draws people in and humanizes someone, especially a historical figure who’s been dead for decades.

MJ: Why is “Photoshop” in there?

“When I left ‘Glamour’ to start ‘Jezebel,’ I knew I was going to go after women’s magazines full force.”

AH: It was part of my mission to call out women’s magazines for the way images are manipulated. When we held a contest for the most egregious examples, I was sent an image of Faith Hill on the cover of Redbook before it had been retouched, and we showed the before and after. It made national news. Now some women’s mags are very vocal about how they don’t use Photoshop like that anymore. I think that’s an indirect result of the stink that we made for many years.

MJ: What was it like working for those magazines pre-Jezebel?

6. “I Carried a Large Doll to Fashion Week, and We Wore Matching Dresses.”

7. “Working at American Apparel Is All It’s Coked Up to Be“

AH: For the two years I was at Glamour I was very frustrated, because I was asked to write stories that focused on sex and relationships as the end all, be all goal for young women. How to find a man, keep a man, please a man—I hated that stuff. I didn’t complain, because I had to pay rent. When I left to start Jezebel, I knew I was going to go after women’s magazines full force.

MJ: Did you come to feminism on your own?

AH: It’s very much in my blood. My parents were civil rights activists, and my mother was active in the feminist movement. Issues concerning marginalized people and especially women of color were what they cared about most in the world. Sure, sometimes I felt like they were lecturing me, and I didn’t really feel like engaging in a discussion about the March on Washington because I would rather watch Punky Brewster.

MJ: What was the original idea behind Jezebel?

AH: Basically, I wanted to create a site I wanted to read. At that time, there was almost no women’s media outlet that wasn’t insulting in some way to young women. They were consumerist, trying to sell things that women really didn’t need, or they were obsessed with celebrity culture and very gossipy—cellulite, baby bumps, things like that.

MJ: Did you take male readers into consideration?

MJ: Women writing online—especially about sexism—are troll magnets. How did you prepare warn your writers?

AH: Often I would tell them, “You can look at the comments, but why don’t you do it later, because a couple hours removed, you may not feel as personally attacked.” They were, I suppose, more thick-skinned than average, but that doesn’t mean they have no reaction to people being assholes.

MJ: I have seen some pretty nasty flare-ups in the comment sections.

“We would count up the models of color every season, and it was always abominably low.”

AH: But we got some of the best commenters on the internet! Usually the people who made fun of Jezebel commenters were men. There seemed to be something very threatening about this very vibrant, kind of argumentative group of women of various ages, backgrounds, locations, who were so devoted, so smart, and so funny.

MJ: When Todd Akin says something crazy about rape, and it catches on in the comments, does it lead to offline organizing? There used to be Jezebel meetups.

AH: I don’t know if they were “organizing,” or if they were just there to hang out. But they were politicizing each other, in a much more profound way than we could have. It was better to let the commenters flesh out the specifics of a particular issue, give them the opportunity to be part of the conversation, not just lecture them.

MJ: Where has Jezebel had the biggest impact?

AH: Along with image manipulation, diversity in the pages of women’s magazines. We would count up the models of color every season, and it was always abominably low. Also I felt that if we just presented people of color, even photographs with no commentary, that would be normalizing. So I decided to put up photos between the text posts, full width—a young girl in Germany getting dressed up for an Octoberfest parade, a young mother in Namibia walking her children down a road, a teacher in Mumbai, a nurse in Tokyo. Women living their lives around the world, and the majority of the world is not white.

MJ: I feel like Jezebel has something to do the fact that women’s issues seem to be a bigger part of the national conversation than they once were.

“I grew up in a very white town. I didn’t have my world being reflected back at me.”

AH: I don’t think the site pioneered anything as much as it came along at a time when people were hungry to talk about that sort of stuff. But the 2008 election and the passion for politics that our readers showed was fairly breathtaking.

MJ: I keep a list of Jezebel links handy for when I need to explain to somebody, for instance, why the Cheerios ad with a mixed-race family matters. I didn’t have anything like that until a few months ago.

AH: I didn’t either. I’m not saying I had a lonely horrible childhood, but I grew up in a very white town. I didn’t have my world being reflected back at me. This is slow movement, it’s not perfect, but I think the fact that you are seeing in bigger, traditional media discussions not just of women’s issues or feminism, but issues of race, is very heartening. That doesn’t mean that you can offer up your hands and say, “Okay, we’re done here.” Not at all.