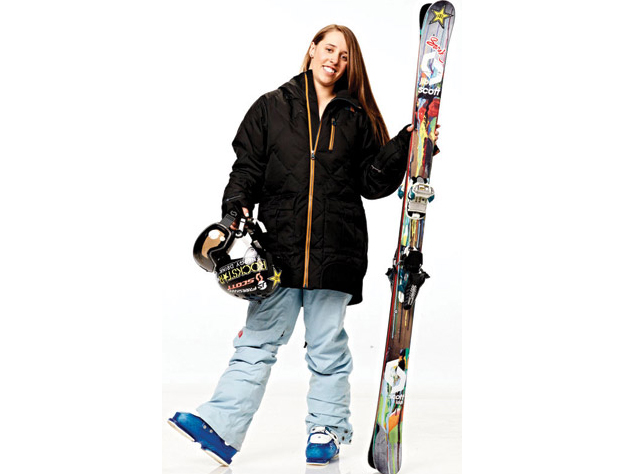 In the lead up to the 2014 Winter Olympics, ski jumping has taken center stage—it’s the first year women will be allowed to compete, a milestone the New York Times Magazine recently explored at length. But let’s not forget another extreme sport premiering in Sochi this year. That would be women’s (and men’s) free skiing, which encompasses halfpipe (hair-raising tricks done off the edge of an icy, steep-walled half cylinder), slopestyle (jumping off rails and obstacles), and ski cross (in which four skiers barrel simultaneously through a downhill obstacle course).

Maddie Bowman, 19, is a rising star in this new Olympic realm, one that seems to scream skate park more than professional arena. A favorite in the halfpipe, Bowman cut her teeth on the steep terrain of North Lake Tahoe. Even though thousands of viewers will be watching the sport for the first time in February, Bowman doesn’t really care if they see her kind as a bunch of park rats: “I think we want people to see that side of us—just being kids goofing off. That’s what we do. That’s why we love what we do. That’s how we’ve gotten so far in skiing.”

Okay, but what does it take to rule the halfpipe? Here’s Bowman in her own words.

On her sport’s spirit animal: It’s like a polar bear-grizzly bear mix—a pizzly! As the ice is melting, the polar bears are migrating south into grizzly territory and they’re mating, and they have this baby that’s a hybrid. So two hybrid pizzlies could make a baby pizzly. It’s a new species, and it’s super badass.

On whether freeskiing is male-dominated: I don’t think we think about it that way. We love skiing with the guys; they’re our friends. I grew up always skiing with boys. We’re out there trying to do the same things and push ourselves. We’re definitely all in this together.

On breaking with traditions: I was a racer before, but it felt a little too serious—a little too strict. I just kind of fell in love with the whole idea of skiing around with your friends and having fun, trying new things, and being creative. It allowed for a lot more freedom.

On mastering a trick: The first time I ever did a “left nine,”—it’s two and a half spins, and I’m spinning down the wall, rotating to the left—I was so excited I completely forgot the rest of my run; I just sort of made it up.

On anxious parents: My parents are both ski race people, so when I first started switching over, they were a little resistant, but then they came and skied with us and realized we think about things before we jump off of stuff. They definitely get nervous. You can’t have my mom video a run at all because it’s so shaky—she always misses it!

On falling smart: Most skiers can think pretty quickly on our feet—or off our feet if we’re falling, and hopefully fall the right way. We like to push the limits and that’s what makes our sport fun—pushing those limits and getting that adrenaline going. Sometimes the limits push back. It’s always a rude awakening when that happens.

On those rude awakenings: Concussions are something everyone worries about. If I hit my head, I always make sure to get a new helmet and stuff like that. But you can’t be out there worrying about getting hurt, or else you’re more likely to get hurt.

Alternative paths: If I got hurt, knock on wood, I don’t know what I would do. Maybe I’d actually be a real college student.