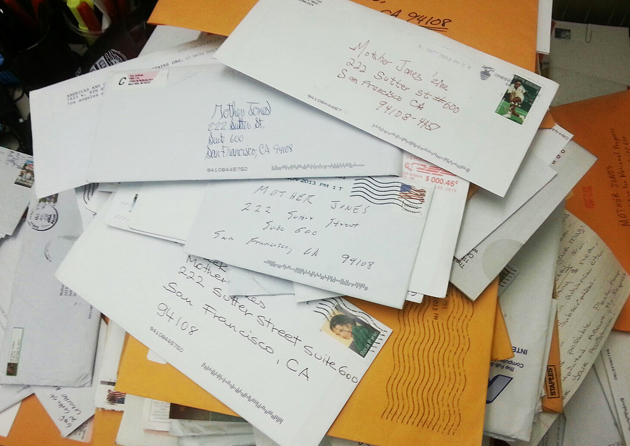 And you thought letter writing was a lost art? Mother Jones still receives handwritten letters every day, and not all of them are from prisoners or crazy people. In any case, they just pile up. We no longer publish letters in the print magazine, and our communications are largely digital these days. We also don’t have the staff bandwidth (if you’ll pardon the internet jargon) to respond to our digital trolls, let alone our snail-mail ones. And yet every day I walk past that stack of letters and wonder what it contains. I decided to read a handful each day, or skim them at least, and share some choice excerpts with all y’all.

April 2013
Dear Mother Jones,
I haven’t heard anything again in the news regarding the “house in a residential neighborhood” that neighbors (CA) complained had a lot of Chinese pregnant women paying to have their babies there so they would have US citizenship. It sounded to me like a sure-fire way to build sleeper cells. Worth investigating?
—JPH, Washington, DC

May 2013
President, Foundation for National Progress,
The “Truth” is that despite your Assertions/claims that “your hard hitting investigative journalism” is Accurate and Factual—you are delusional self congratulating Fools. When I see distortions and outright lies being printed about firearms, firearm owners, 2nd amendment Rights Groups and organizations, your credibility about other issues you print material about becomes untrustworthy as to veracity. Good bye you San Francisco “Tootie Frooty” Assholes located in the “land of Fruits and Nuts” (California).
—Anonymous

October 2013
Mother Jones Science Editor,
Einstein, Hawking, Penrose, Randall, O’Meara: Frauds one and all. The biggest hoax on the planet is called physics. Since the 1800s, science has moved forward in most areas, backward in others. There are two Universes, not one. The greatest discovery of all time, The Jussiverse (YOU-see-verse, Jussi Huotari), is being studiously ignored by the scientific establishment. Why would they turn their backs on what they claim to be searching for? It’s simple: The truth will destroy their careers.
—RR, Clinton Correctional Facility, Dannemora, New York
[From the enclosed “Exhibit B,” titled “Physics IS Pseudoscience.”]

November 2013
Dear Senior Editors,
This is a plea for you to put Sarah Posner’s article (about George W. and his convert-a-Jew-to-Christianity-to-end-this-world nut cases) in the next issue of Mother Jones. Mother is known for front-running, hard-hitting stories no one else digs for or is willing to expose. I heard about this on Rachel Maddow‘s program. When I called Mother, I found it may just be on your magazine website. Many of us—me, for instance, since I slept with one for work for three-plus decades—wouldn’t own a computer for nutten! We (i.e. people) call each other, get together, etc. If Ms. Posner’s article isn’t published in Mother‘s mag, a huge disservice will be done to everyone. Please, please bump another story if necessary and run the one about these biblical terrorists. Thank you for shaking off the dirt to expose the poop.
—KMD, Warrenton, Oregon