You may have seen some alarming statistics on the downright puny numbers of girls and students of color taking the Advanced Placement computer science exam in several states. Last year, not a single girl took the college-level coding test in 2 states and no black students tested in 11 states, including Mississippi, which has the biggest black population in the country. Those stats, taken from a Georgia Tech analysis of all AP exams taken in 2013, are abysmal—if unsurprising.

Less remarked upon was the fact that practically nobody is taking this test. Check out the number of all exams taken in AP computer science compared to five other subjects: 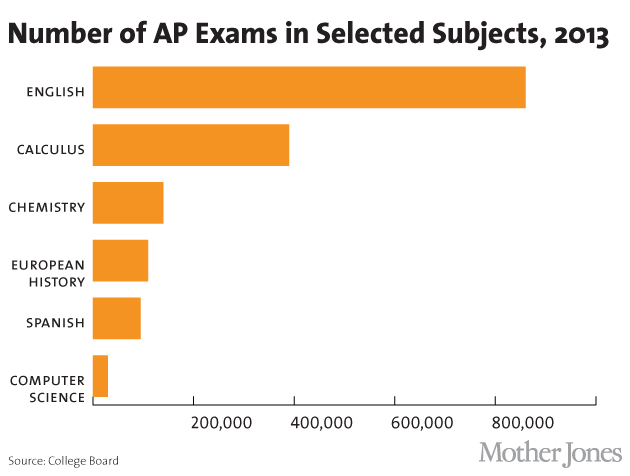 Computer science wasn’t even in the top 20. More than three times more students tested in human geography (114,000) than computer science (31,000). No knock against human geography, but the Bureau of Labor Statistics says 1.4 million new jobs in software engineering will be created between 2012 and 2022. At current rates of enrollment, just 30 percent of those jobs could be filled by US college grads majoring in computer science. 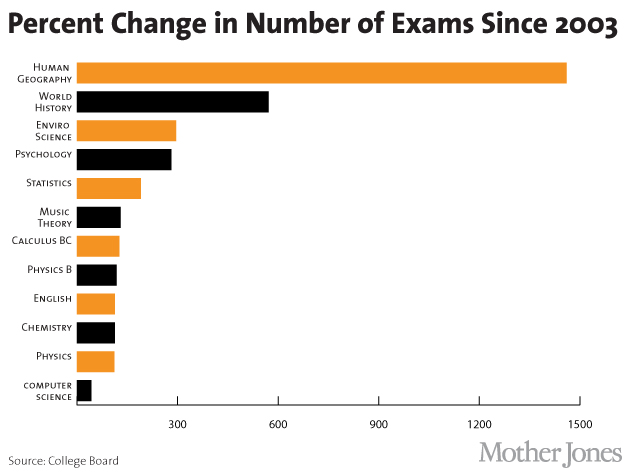 You might question the relevance of a high school computer science credential in a field that loves to tout the Ivy League dropouts and self-taught programming wunderkinds helming tech companies valued at billions of dollars. That’s fair, but for kids who don’t gravitate toward coding at home (i.e., the vast majority of kids), getting exposure to new subjects and interests at school is sort of the point of going to school. Yet most kids don’t even get a chance to thumb their noses at computer science; the report shows that of the 18,000 US high schools that offer AP courses, just 3,000 offer AP computer science: 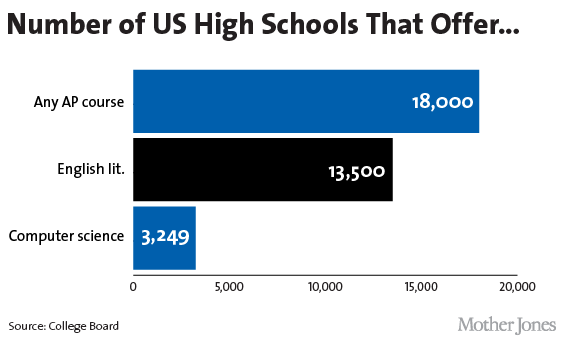 In fact, the number of high schools offering the course has gone down by 51 percent since 2005. There’s a whole host of complicated reasons few schools offer the test and few kids take it, from boring material to a lack of qualified teachers to the fact that in most states, computer science counts only as an elective. So while it’s absolutely fantastic that much attention is being paid right now to school’s role in tech’s gender and race gap, the system really is broken for everybody.