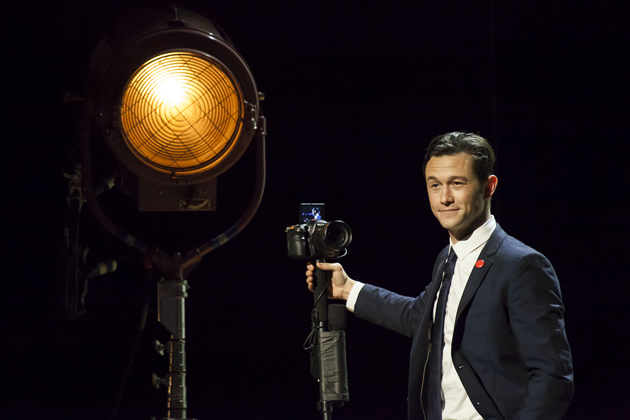 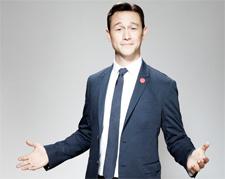 READ THE INTERVIEW: “Yes, Joseph Gordon-Levitt Will Marry You“

Near the end of the first season of NBC’s 3rd Rock from the Sun (his breakout role as a child star), a young Gordon-Levitt donned Blues Brothers attire and strummed a Fender Stratocaster while belting out 12-bar blues about how much planet Earth “sucks.” His character Tommy—a crotchety old alien trapped in a schoolboy’s body—was having an identity crisis. “Well, I’m black now,” Tommy explains. “I’m black, and I got the blues!”

It was a silly sitcom moment—but it offered a hint of the versatile, musically talented performer who would fully emerge in the years to come.

“I’ve played music really my whole life,” Gordon-Levitt told me. “I wouldn’t consider myself an aficionado on the blues. I know the normal names—Howlin’ Wolf, Robert Johnson—but most of what I know about the blues came from Jimi Hendrix…Whether it’s a rock ‘n’ roll song or a pop song or an R&B song, generally those three chords are at the core.”

It was with this kind of unpretentious musical knowledge that Gordon-Levitt mounted his dream project. He’s spent years starring in festival-circuit fare (The Lookout, 50/50) and big-studio flicks (Inception, G.I. Joe: The Rise of Cobra). In 2013, he made his writing/directing debut with the critically acclaimed Don Jon, in which he starred opposite Scarlett Johansson. But if you want to know what excites him most, you have to look at hitRECord, the production company he cofounded with his brother in 2005.

“If I could do anything,” Gordon-Levitt insists, “this is it.”

You might have heard about hitRECord from Gordon-Levitt’s Twitter feed, or maybe you’ve stumbled across one of the many YouTube clips of him banging on a piano, playing his guitar, and singing pop songs at hitRECord live shows. These would include his solo covers of Lady Gaga’s “Bad Romance,” or “Midnight Radio” (from Hedwig and the Angry Inch), or Oasis’ “Don’t Look Back in Anger.” Check it out:

On Saturday, January 18, the project’s televised version, HitRECord on TV, premieres on Pivot—Participant Media’s new cable channel tailored to millennials. (You can watch the pilot on YouTube for free.) Hosted by Gordon-Levitt, the series follows the company’s patented formula for creating music, short films, live gigs, and other art based on pitches from unknown artists around the globe. Virtually anyone can submit an idea or an artistic contribution to the show online.

“[My brother] really was the most encouraging dude—and that’s at the heart of what hitRECord is.”

“The other day, I was working with this animator named Marie who lives in St. Petersburg, and before that I was working with some other guy named Anthony who lives in London,” Gordon-Levitt says. “I was very fortunate to have a successful year as an actor in 2012, and I decided rather than do a bunch of commercial stuff that would make me lots of money, I leveraged that success into getting this TV project off the ground.”

His partner in the enterprise, his late brother, Daniel, took part in the first handful of live shows prior to his death in October 2010. “I always remember those, because I always wish he could be at our subsequent ones,” Gordon-Levitt says. “I think of my brother all day long. But hitRECord always makes me feel connected to him. And it makes me feel good that there’s a whole community of people who know who he really was and continue to be influenced by his warmth and his enthusiasm. He really was the most encouraging dude—and that’s at the heart of what hitRECord is.”

Each episode has a theme—the theme of the pilot is, fittingly, the number one—and it unfolds as a new-media variety show. Call it Sesame Street for grownups. Indeed, Gordon-Levitt cites Muppets creator Jim Henson as a key influence. “We’ve talked about our TV show in terms of Sesame Street,” he says. “Because it’s also sort of a variety show: One minute you’ll be watching a scene, the next minute a cartoon, the next minute this footage of a llama. I remember loving that…When you watch pretty much any of Jim Henson’s stuff, whether it’s that or The Dark Crystal, I always sense a sincere care for the audience and for humanity. That’s something I keep in mind with anything we do.” 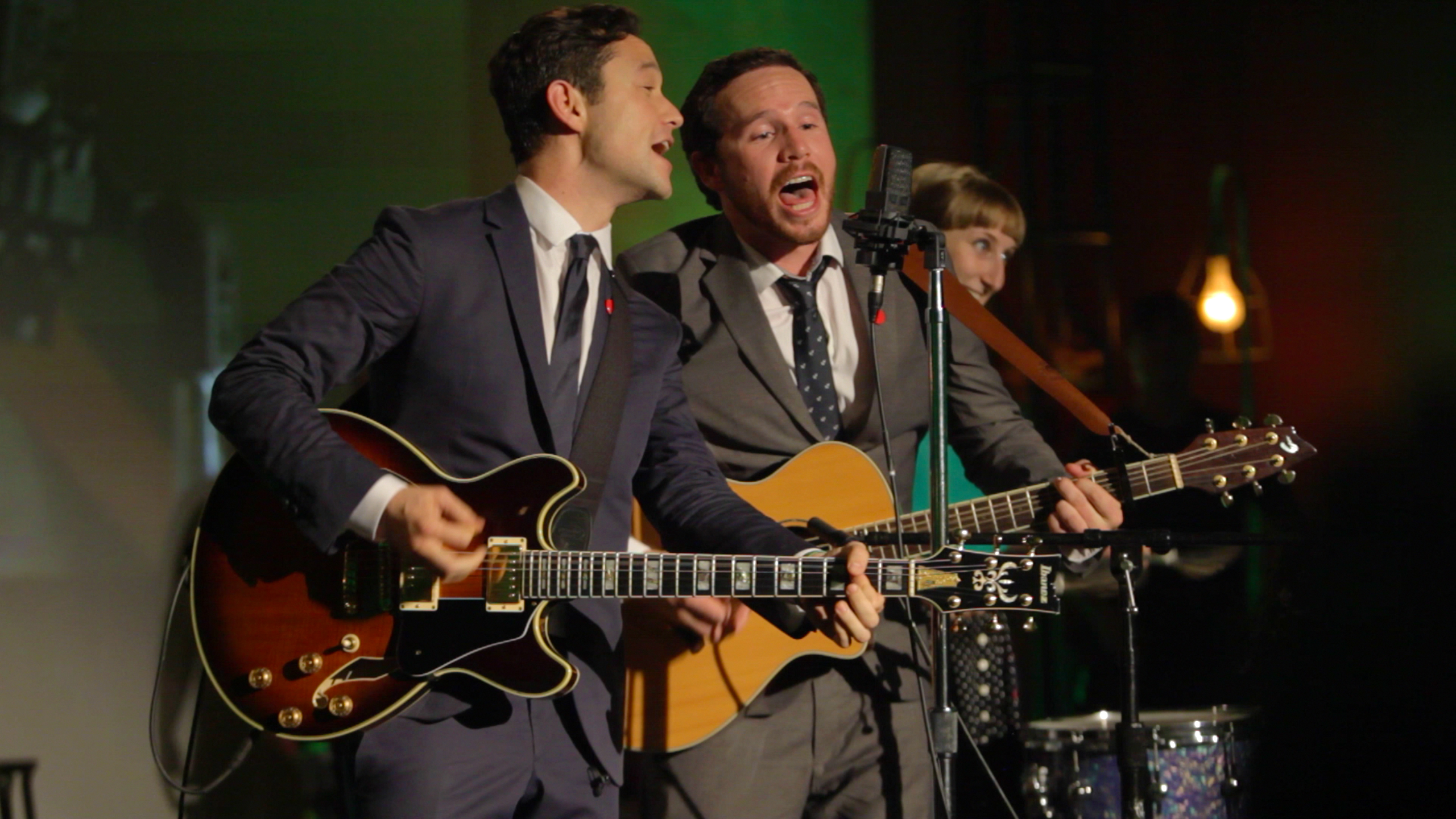 The show also serves as Gordon-Levitt’s respite from the Hollywood hype machine. He’s been stalked and hounded about homosexuality rumors, and has called celeb-tabloid culture “evil and poisonous.” He’s slammed various news channels as being infected with the strain of show biz, equating them to “some bullshit entertainment show.” Now he’s hoping to leverage what he once called the “fascist cult of celebrity” to his advantage.

The actor laughs when I recall that old quote. “I find myself in a position to contribute to what mainstream media is,” he says. “There’s still an archaic hierarchy in play [in showbiz] and I’m the beneficiary of that. I could either run from it or embrace it and make it something good and beautiful and healthy. With this show…I’m not gonna look down on people and declare them the audience and say that I’m the performer.”

“I tend to think that having an impact on the world is a lot more complicated than government.”

It’s no secret that Gordon-Levitt is a liberal, a proud feminist, and an Obama supporter. His parents, cofounders of Southern California’s Progressive Jewish Alliance, met at a public radio station and were active in left-wing movements of the ’60s and ’70s. His grandfather was a blacklisted Hollywood director. But Gordon-Levitt isn’t so much looking to the ballot box for meaningful change.

“I tend to think that having an impact on the world is a lot more complicated than government,” he says. “If I were to point to the person who’s having the greatest impact on the world right now, I probably wouldn’t be naming that many government officials. I’d point to, for example, Elon Musk. What he is doing with Tesla and SolarCity is having a greater impact on the cause of environmentalism than any current law.”

For young people who feel alienated from or disillusioned by politics, Gordon-Levitt’s advice would be to just contribute to society.

“Being politically active,” he says, “is not just standing for some platform or being involved in some political party. I would argue that the…TV shows and movies we watch, the songs we listen to, the stories we read have a huge impact; it’s a part of what defines our vocabulary and how we make sense of the world. I would consider what I do to be something, I hope, that contributes to moving things in a positive direction.”

All this earnestness is not to say that Gordon-Levitt is incapable of making fun of his status as a coveted matinee idol. When I asked readers and friends what question they wanted me to ask Hollywood’s go-to star, the overwhelming majority of the responses boiled down to: Will he marry me?

I’m happy to report that he has assented. And it sounds like it’s going to be quite a wedding.

While you shop for the bridesmaids dresses and white tigers, check out the first episode of HitRECord on TV below. It ends with a lovely original song, “You’re Not the Only One“—the result of more than 900 contributions.