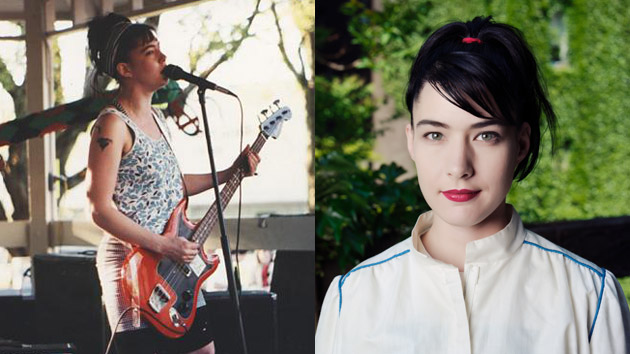 As a college kid in early ’90s Olympia, Washington, Kathleen Hanna was fed up with the punk-rock boys’ club—so she made a punk rock girls’ club. With screechy vocals, dirty guitar, and fast and catchy melodies, her band Bikini Kill railed against sexism and violence against women. But the music wasn’t all: Hanna and her friends made zines and held meetings for girls who were sick of being told to act like ladies. When Bikini Kill’s second album, Pussy Whipped, gained national attention in 1993, the new movement, known as riot grrrl, took off.

Fans around the country made their own zines and girl-fronted music. When Bikini Kill broke up in 1997, Hanna went on to form her one-woman lo-fi band Julie Ruin in 1999, the dance-punk trio Le Tigre in 2003, and The Julie Ruin, a quintet that released its debut album, Run Fast, this past September. I caught up with Hanna to talk about kids these days, riot grrrl’s legacy, and why she’s glad Miley Cyrus proclaimed herself a feminist.

MJ: How would you say Run Fast differs from your past work?

KH: I really just let the record be what it was gonna be, and I didn’t control it. Like, the song that answers the person’s letter who writes me and says, “I’m gay and I came out to my family and they kicked me out of my house and I feel totally suicidal.” And then I write a song for that person. I couldn’t do that with this record. I really needed to write something just for me.

“I don’t consider myself a divining rod whom God is speaking through or any kind of crap like that.”

MJ: A lot of your older stuff spoke directly to young women. Who’s your audience now?

KH: I’m not really thinking about whom I’m writing for. It got to the point where it started to feel like everything in my work was audience-based. In Le Tigre and in Bikini Kill, people said, “You’re preaching to the converted.” In Bikini Kill, it was ridiculous because most of our audience was way more than halfway male. But in Le Tigre, we had already developed this feminist queer community who supported our band, and I would say, “Yeah, and that’s great, because the converted don’t have enough music or arts made for them.” I was really into that. But now, I don’t want to have an audience in mind. I don’t consider myself a divining rod whom God is speaking through or any kind of crap like that. I’m specific about the work I’m making, but just letting there be a little more play and freedom.

MJ: Do you see the riot grrrl movement persisting in today’s culture?

KH: Yeah, I mean, look at Pussy Riot. There’s an old picture of me with “Pussy” and “Riot” written on my arms in Sharpie. I also see girls’ rock camps all around the country and in the UK. There are so many women my age who got involved with that early on, and so many bands that were considered riot grrrl bands who’ve been teaching at the camps. I’m not taking credit for it. I remember the first time I walked in and I was like, “Oh, I didn’t have to do this! These other amazing women did this, and I can just enjoy it.”

MJ: Has it gotten easier for young women to be in bands?

KH: I think it must be, because there are so many more all-female bands and they play instruments—they’re not just, you know, a vocal group someone puts together. But I meet women who are dealing with the kind of crap that we dealt with—you know, guys yelling at them when they’re on stage, or these horrible comments on the internet that say, “Oh, you’re only getting attention because you’re girls” or “You’re fat and you’re ugly” or “You’re beautiful and that’s why people like you.” And when I hear that, I get really sad because I’m like, “Wow, we haven’t come very far.”

MJ: I’ve gotta ask: What did you think about Miley Cyrus at the VMAs?

“It’s really cool that Miley Cyrus said she’s the biggest feminist ever. I was like, ‘That’s the sound of 200,000 eight-year-olds Googling the word “feminist!”‘”

KH: You know, I didn’t see it. I could’ve watched it on the internet, but I just didn’t want to, because I don’t really care. I just feel like the healthcare situation, the recent government shutdown, all of the events around the world are just so much more important. I do think it’s really cool that Miley Cyrus said she’s the biggest feminist ever. I was like, “That’s the sound of 200,000 eight-year-olds Googling the word ‘feminist!'” I was pleased.

MJ: Have your interests become less about personal politics  over the years, and more about global politics?

KH: Yeah, definitely. I think a lot about how so many women can’t contribute their voices to the feminist movement because they’re just trying to put food on the table. Or they have an illness that they can’t get treated because they don’t have health insurance. I think a lot about people who die unnecessarily because they don’t get to see the good doctors. Those kinds of things move me in a similar way that violence against women moved me in the beginning of Bikini Kill. And of course, that still totally upsets me, but poverty is really utmost in my mind right now.

MJ: When I was a teenager just discovering Bikini Kill, this music was kind of how my friends and I formed our identities. Is it still possible for young people to have that kind of a relationship with music?

KH: I don’t know because I’m not a young person anymore. But it’s…there’s just so much! I’m amazed that younger people can absorb anything. I gotta be honest about the way that I listen to music, and this is really letting it all hang out: I watch videos on YouTube of bands that I’ve heard of that I want to check out. And sometimes I don’t even finish the video. And that’s really sad, because maybe I’d like that song. I think that we don’t give stuff a chance to really sink in.

Below, the Julie Ruin. And click here for Hanna’s rundown of what she’s been listening to lately.