As the world gears up for the Sochi Games, we reached out to these three amazing women to talk about everything from their first runs to high-speed crashes to race and gender politics. The opening ceremonies take place on Friday, February 7. Here’s the complete schedule of events.

A lot of people think I’m on the Jamaican bobsled team. It’s a question every black bobsledder gets, even if you’re wearing a USA shirt. My dad used to love watching Cool Runnings with me. When I told him I got an invite to try out for the US bobsled team, his first words were: “Sanka! You dead, mon? Let me kiss your lucky egg!” Growing up biracial, I never really thought about things: I mean, you have some acceptance issues, but I grew up in a predominately white town. The side of my family I’m closest with is all white, so it’s not necessarily a topic of conversation. You get a lot of naive questions, but I welcome those. The more people I can teach and tell about bobsled, the more cheers we’ll have in Sochi. Not many people can relate to bobsled, and it’s hard to spectate. It’s a grueling, blue-collar sport. To support my bobsled habit, I’ve sometimes worked three jobs in the offseason. We do all the work on our sleds. We carry our sleds. There’s no caddy, there’s no pit crew. We handle all those things on top of trying to be the best athletes within our sport in the world. 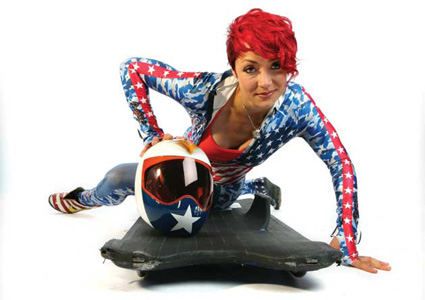 I always challenged men in foot races or whatever as a kid growing up, because it was a way of challenging myself—but you have to accept that men are born with testosterone. You can beat them for so long, but eventually they’re gonna catch up. There is a double standard: My father was a major league baseball player, and I grew up thinking I could have the same attitude on the field that he did. When I did that in real life, people thought I was a total bi-atch. [Laughs.] Women are held to a different standard, but there’s a reason. Because we are mothers, we have a different role in society. There are certain benefits we get being women—and we deserve them! But don’t take advantage of them. You have to walk the line and show that you have self-worth. If you lose yourself, then no one’s going to respect you. Miley Cyrus, the girl crossed the line! You can be sexy without licking a hammer. 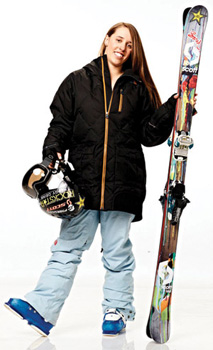 Some people don’t understand that you can ski in the halfpipe. They think it’s cool and kinda crazy. It’s like a polar bear-grizzly bear mix—a pizzly. It’s a new species and it’s super badass! I was a racer before, but it felt a little too serious. My parents were a little resistant, but then they skied with us and realized we think about things before we jump off of stuff. They definitely get nervous. You can’t have my mom video a run at all because it’s so shaky—she always misses it! The first time I ever did a “left nine”—it’s two and a half spins, and I’m spinning down the wall, rotating to the left—I was so excited I completely forgot the rest of my run; I just sort of made it up. Most skiers, we can think pretty quickly on our feet—or off our feet if we’re falling. We like to push the limits, but when the limits push back, it’s always a rude awakening. Concussions and injuries are something everyone worries about. But you can’t be out there worrying about getting hurt, or else you’re more likely to get hurt. If I got hurt, knock on wood, I don’t know what I would do. Maybe I’d actually be a real college student.

Click here to read more about Bowman. The women’s halfpipe competition is on February 20.