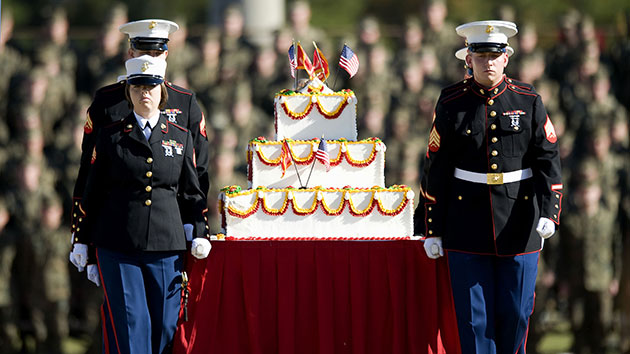 Marines deploy an enormous layer cake to celebrate the Corps' 233rd birthday in 2008.<a href="http://en.wikipedia.org/wiki/United_States_Marine_Corps_birthday_ball#mediaviewer/File:MarineCorpsBirthdayCake_CampLejeune_2008_081107-M-3189M-001.jpg">US Marines/Wikipedia</a>

Yesterday was the United States Marine Corps’ 239th birthday. Jarheads and leathernecks celebrated as they long have—with big-ass cakes like the one above, which commemorated the Corps’ 233rd birthday in 2008.

The Marines’ big birthday cake bashes date back to at least 1935. They’re such a part of Marine tradition that there’s even a protocol for cake serving, including the ceremonial use of the Mameluke sword (below) and who gets the first slices (the guest of honor, followed by the eldest and youngest Marines present). 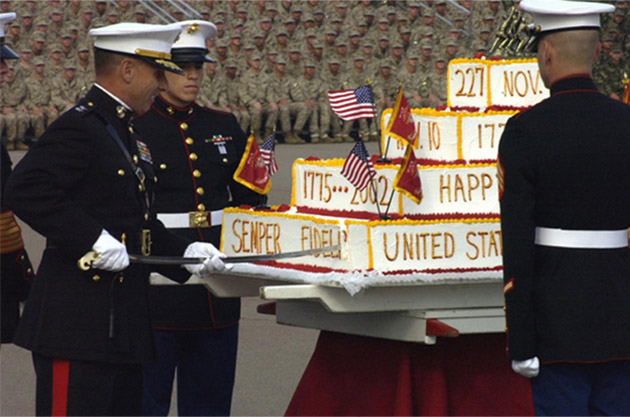 And it’s not just Marines who love their cake. The entire military appears to be preparing for the day when the Pentagon has to hold a bake sale. That means plenty of sheet cake with white frosting—but also some more elaborate creations like the ones collected here.

(How much of the Pentagon’s $600 billion budget goes to cakes? It’s not clear, though this 2010 Marines memo notes that there are strict rules for pastry funding: Only three to four slices of each cake may be paid for with appropriated funds.)

1. For the Army’s 237th birthday in 2013, a cupcake tank rolled into the Pentagon. The confection included 5,000 cupcakes, more than 200 pounds of camouflage fondant, and a functioning “cupcake cannon.” It also came in massively over budget at a total cost of $1.2 billion. (Not really.) 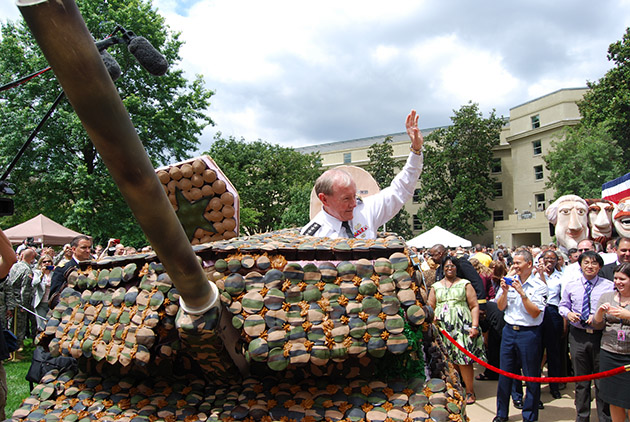 2. The 40th anniversary of the Air Force Defense Support Program is observed with a cake shaped like a missile-detecting satellite. (According to the after-action report, “an anomaly prevented the cake from entering the ballroom as planned.”)

3. To welcome the USS Theodore Roosevelt in March 2002, the commissary at the Naval Air Station in Virginia Beach, Virginia, baked this 750-pound, 12-foot cake, complete with “an edible aircraft carrier layer on top.” 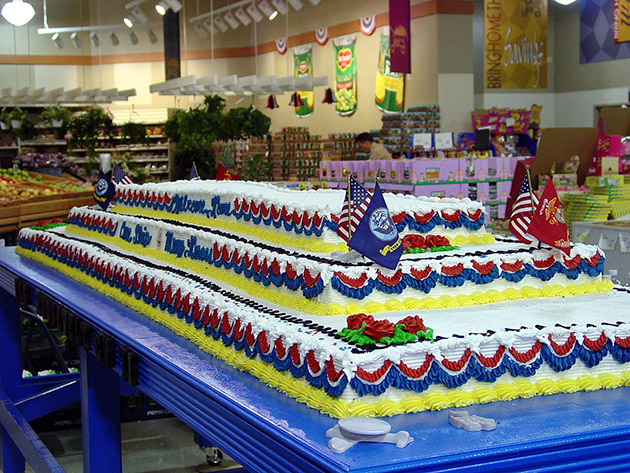 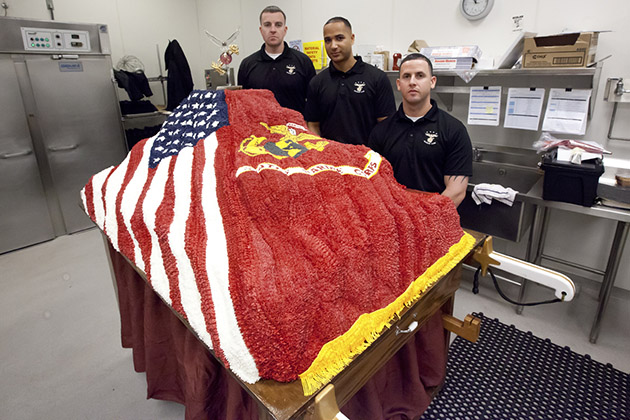 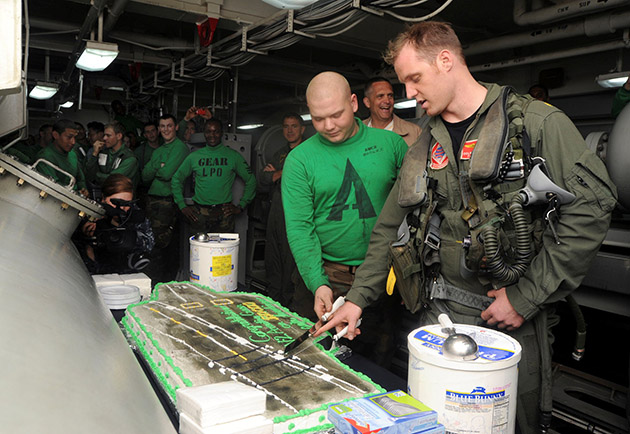 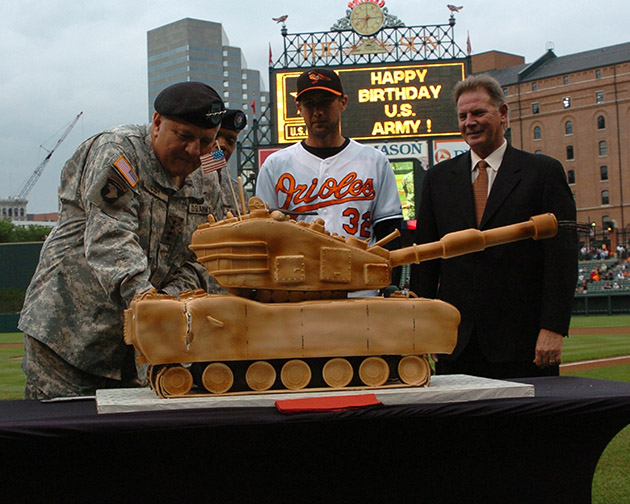 7. A cake resembling the painted rocks at the Fort Irwin National Training Center, California, made for the Army’s 239th birthday in June. 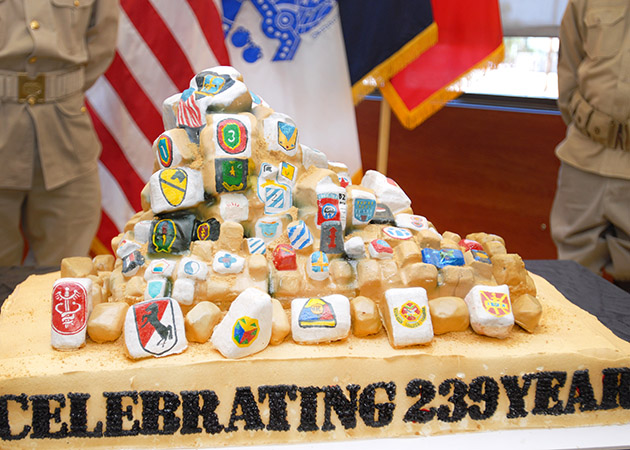 8. An enormous, creepy George Washington hovered behind Army Chief of Staff Gen. Ray Odierno (third from left) as he engaged in a show of symbolic bureaucratic redundancy at the Army’s 239th birthday party. 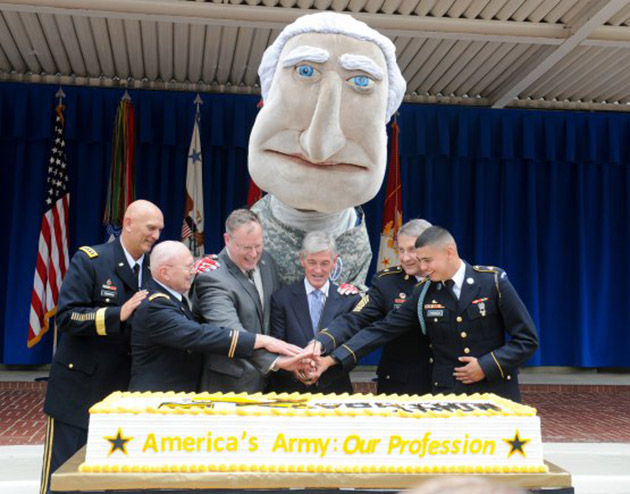 9. Two Air Force service members slice an otherwise ho-hum cake with an airplane propeller to commemorate the 59th anniversary of Special Operations Command Europe (whose acronym, SOCEUR, is clearly meant to test the loyalty of our European allies). 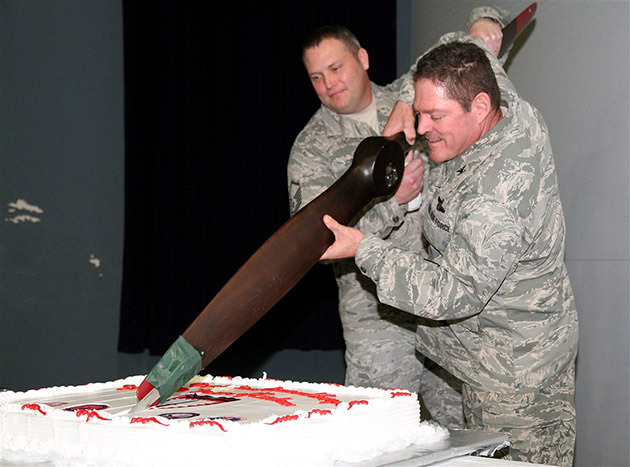 10. If a propeller isn’t handy to make your cake ceremony more exciting, there’s always a guest appearance by Vice President Joe Biden, who popped up at Camp Liberty in Baghdad in January 2010 just to make Dick Cheney jealous that he’d found the missing Iraqi yellow cake. 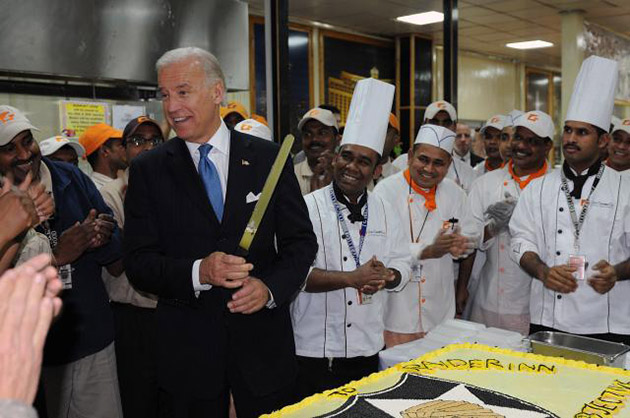