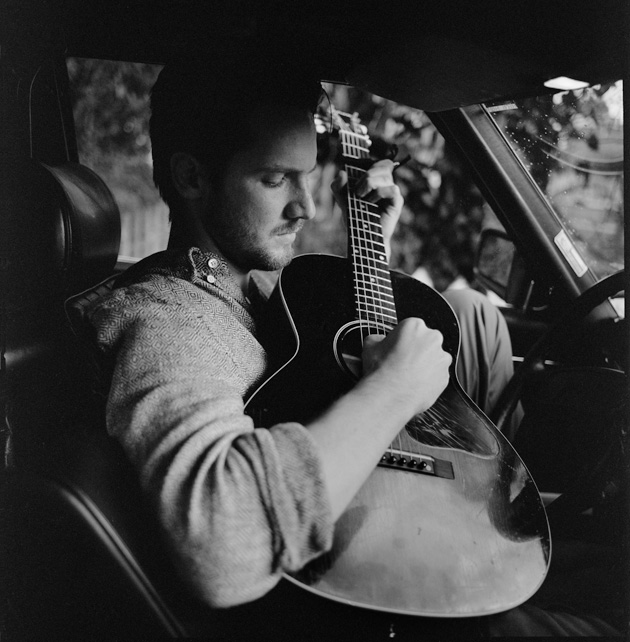 The 28-year-old California native Blake Mills has been playing guitar with a singular focus since he was 10. As a high school kid he cofounded, with Taylor Goldsmith, the band Simon Dawes—which would reform as Dawes following Mill’s 2007 departure.

I photographed and spoke with Mills in Los Angeles at the home of producer and frequent collaborator Tony Berg.

Mother Jones: Many notables regard you as a great player. For someone who’s gone so deeply into your instrument, have you discovered certain ways of practicing that are particularly effective?

Blake Mills: I think I had a way of practicing when I wasn’t sitting with an instrument, thinking about things at such length that they ingrained themselves into my musical vocabulary so I could draw from that in an improvisational situation. Earlier on, when the things that began to really resonate with me and fascinate me started to surface, it was a kind of catharsis. Anything we were studying in school, like math, or understanding somebody’s behavior outside of school, kind of worked its way into something I could understand by way of a musical experience I’d had or something I’d heard.

“I remember being 16 or 17 and going apeshit for that kind of playing: Yngwie Malmsteen or Steve Vai.”

MJ: So music became the lens for how you viewed and processed everything?

BM: It was the common denominator, like a first language—the Rosetta Stone that I keep going back to. Maybe that helps to keep the enthusiasm. You can get really burned out and apathetic if you listen to too much music. If you go out to shows and you hear some of the shit that comes out, it can be soul-crushing just to be exposed to it, let alone work on it or be around it for a living. It’s the most surprising thing that I’ve encountered since the experience of putting a record out with a major label and touring and everything: the need for the protecting yourself from things that take away your energy.

MJ: As you create songs and albums, do you think of it as slowly establishing a body of work?

BM: I don’t know if I think about it like that. My favorite experiences have all been finding myself at one point in a timeline and going in both directions, just discovering at my own pace. If I could admit to be playing some kind of long game, and strategizing this, I would. I think my role as a musician is much more reactionary than that of the creative personality type who locks himself in a tower and then comes out with Pet Sounds or something. I just respond to stimuli more than anything.

MJ: You could easily be out there doing front-and-center, face-melting guitar stuff—but what’s remarkable about both of these albums is that you use your abilities in the service of a bigger picture. You’re seem unconcerned with pyrotechnics.

BM: Yeah, I’m not sure if I’ve ever felt like there was an appropriate time to approach my own songs and add that thing to it. I remember being 16 or 17 and going apeshit for that kind of playing: Yngwie Malmsteen or Steve Vai. I was just going, “How do these guys do it?” And then you sit down with one of those passages and learn it, and you go, “Oh, I can do it.” But when you sit down with the chords to Gershwin’s “Someone to Watch Over Me,” or Kurt Weill’s “September Song” and the piece of music doesn’t give you any more insight into how a song like that is written or created. There’s something so much more fascinating and mysterious to me about where those things come from than the playing. There are things on this record where people will go, “I’m not sure where the guitar playing is on it.”

MJ: You play a lot in nonstandard tunings and really just have your own way of doing things. How did you discover those techniques?

“My finger got fucked up, crushed in a door, and it was in one of those metal splints. So I started playing slide.”

BM: Using slide was a big precursor for me into the open tunings. There were a lot of things about Derek Trucks, Ry Cooder, Elmore James and Kokomo Arnold, this huge era of guys who all played slide in certain dialects. I had the benefit of the internet when I was growing up, so I was listening to all the live tapes of Derek Trucks‘ band that I could get ahold of, and reading interviews, and seeing that the people he was listening to were the same people I was listening to.

I grew up playing with a guy named Bob Brozman, who was a world-music guitar player. He’d just go around the globe and make these beautiful records with different musicians, spoke something like 11 or 12 languages. He turned me on to a lot of the Middle Eastern and West African players that shaped a large part of the vocabulary of what I do.

At the same time, my finger got fucked up, crushed in a door, and it was in one of those metal splints. So I started playing slide. And the open tuning thing just came with the package. Then I started thinking, I’ll be a better slide player if I really demystify this tuning. I should try some of the things, just a verbatim sort of transfer over to the open tuning, and see what it does.

MJ: What’s the most difficult part about playing for you, the thing you really have to slog through to make progress?

BM: Staying enthused about finding things; discovering new beauty in the world that can translate into music. That’s the most precious sort of resource. You have to pull stuff from outside of the musical realm. Whatever muscle it is that it takes to listen to music and stay focused, in me, is really strong. I don’t have a problem working 14 hours a day and still have ears and have a brain to mix afterwards. But I don’t have the same strength to actively pursue and stay enthused about things like literature and movies and a social life—things that enhance the music, and the person. I don’t want to become this lazy person, a guy who thinks in terms of New Year’s resolutions. I really do want to see a change in myself in certain ways, but I want to figure out exactly what they are and not have it be like a diet that I’m trying.

That’s the most alarming thing to me. I’m 28, and the world just starts to look like a different place as you start realizing, “Okay, now you’re 35, now you’re 40, and it’s no longer the thing where, “He’s really young, and he’s good.” I want to be good at something else that feels a little more private, a little more personal. That I think that will ultimately be more valuable, looking at everything, if I make it to 50 or 60 or 70. 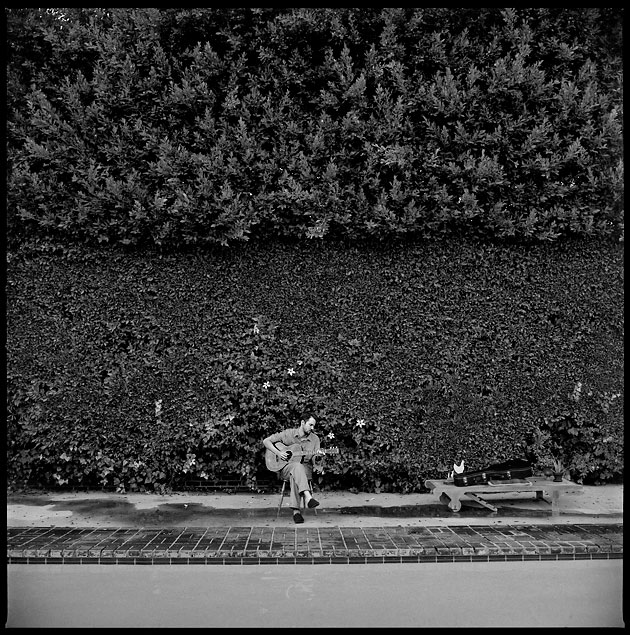 MJ: I guess that’s what I’m sensing with the albums. These are attempts at a whole process. They’re not guitar records, they’re not even just songwriter records. There’s a lot of depth to the sound.

“I’m surrounded by guys who are some of the best musicians on their instruments that there ever were.”

BM:  The most attractive thing that I’ve seen in the creative realm is the enthusiasm in people that does not seem to burn out. That’s what I’m after. Fuck, I can’t tell you how amazing it would to be able to be to call from memory the Schubert Lieder or Bach Etudes and be able to play them at the level of Chris Thile or Edgar Myer. I’m surrounded by guys who are some of the best musicians on their instruments that there ever were. It’s a heavy, heavy concept. And they all seem to enjoy something other than the celebration of that ability. When we get together, we play Dylan songs.

When you have the catalog of work, it doesn’t feel like you’ve got one shot to get it right; it’s just like, you’re making a new document of something at the present time, and it’s a living thing, and it changes. It’s been cool to help other people make their records, to produce. You get a crash course in things that you don’t get as the artist.

MJ: What was it like producing the Alabama Shakes?

BM: It was an amazing experience. It was such a serendipitous combination, because there aren’t a lot of bands that I’ve ever heard of who have the kind of success on the first record that they did, and then chose to be as daring and challenging as they did on their second record. Instead of trying to figure out how to capitalize on it, or keep the pace, they were energized and wanted to make a record that checked all the boxes of the honest things that worked for the forces of good. I’m worthless in a conversation of, “Well, what about the radio? Let’s listen to five records that sold really well last year.” I would way rather be on the side of something that is beautiful and never catches on than the alternative. Not that there’s one alternative, but there’s definitely some stuff you can end up in that I would be embarrassed with myself for doing.

In Close Contact is an independent documentary project on music, musicians, and creativity. Visit InCloseContact.com for extended interviews and more photography.