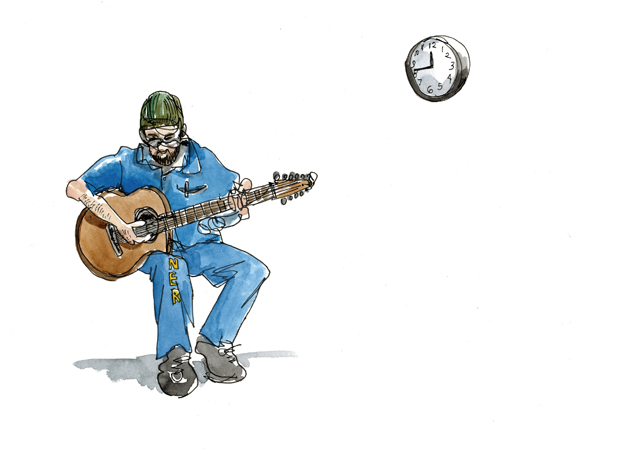 Inmates at California’s New Folsom prison are slowly creating a sequel of sorts to Johnny Cash’s hit record, and if an early preview of one song is any indication, their mix of folk, soul, blues, and hip-hop may be worth the wait.

The Prison Music Project, the brainchild of Canada-born singer-songwriter Zoe Boekbinder, is a collaboration between artists on the outside and at least eight men currently or recently doing time at New Folsom, the maximum-security facility adjacent to the lockup where Cash recorded Live at Folsom Prison back in January 1968.

“The people who are confined behind these walls are more than the crimes they were convicted of.”

Boekbinder, a singer who mixes folk with pop, has released five albums of her own and toured all over Europe and North America. While volunteering in New Folsom’s art program from 2010 through 2014, she got the idea to set the men’s poetry and lyrics to music. She reached out for help from folk-rock icon Ani DiFranco, with whom she’d previously shared a stage. DiFranco agreed to produce the album—she’s like “my co-pilot,” Boekbinder says—helping envision how each song might sound and working out arrangements and instrumentation.

The inmates will sing on some tracks, Boekbinder on others. She’s also reaching out to additional musicians, but, “aside from the folks in prison, I don’t want any one artist, including me, to be featured,” she says. “I want it to be about the people these stories belong to.” She has already recorded some songs inside New Folsom for archival use, but access at the prison is limited, so she’ll record tracks for the album over the phone or, in certain cases, after inmates have been released.*

The songwriters, she says, focused on their experiences with foster care, drug-addicted parents, and gang violence—as well as their longing for home. In the blues-heartbreak “All Over Again” (listen below), 72-year-old Kenneth Blackburn sings of lost love and the skies outside his window. “A lot of his songs talk about death. His health is not good, so it’s a common theme in his music,” Boekbinder says.

And here’s a version of the song with Boekbinder singing. (Down below, you can also watch her perform it at the House of Blues in New Orleans.)

Another song, “Villain,” combines two poems by Nathen Jackson, a 40-year-old from Sacramento who was released last June. Incarcerated in 1997 for aggravated assault (Jackson says he was defending himself), he served two stints at New Folsom alongside lifers. “At level-four security,” he says, “violence happens. You’re surrounded by a bunch of individuals who have nothing to lose, they’re not going anywhere.” The prison’s art program put these men into a room together, working on poetry and critiquing each other’s writing. “It’s amazing work, and it’s the type of rehabilitative programs that we really need,” Jackson says, adding that it was the only positive part of his time. 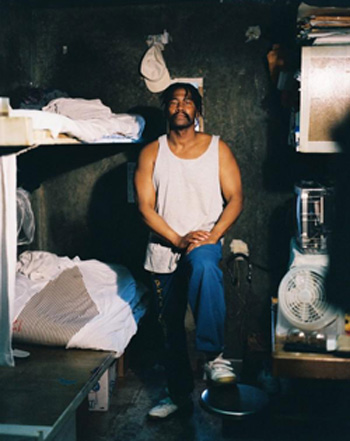 “Villian,” he says, describes the feeling of being isolated: “The people who are confined behind these walls are more than the crimes they were convicted of. We’re fathers, brothers and sons. We were children at one time. Until people actually understand that, they’ll still look at everyone behind bars as the stereotypical convict, like we’re no good and we don’t deserve to be rehabilitated.”

Another contributor, 57-year-old Stanley “Spoon” Jackson (no relation to Nathen), is serving life without parole for a murder conviction in the late 1970s. Before his transfer to New Folsom, he caught the attention of a poetry teacher at San Quentin State Prison, who helped him get published. He eventually became an award-winning poet, author, and playwright. He played Pozzo in a prison production of Samuel Beckett’s “Waiting for Godot” and was featured in “At Night I Fly,” a 2011 film that won Sweden’s prestigious Guldbagge Award for the year’s best documentary. Writing is “my niche, my bliss, my life,” Jackson says. (He’s now at yet another facility.) “It allows a huge part of me to be free, despite these bars.”

Boekbinder recently asked another prisoner, 30-year-old Gregory Gadlin, who wrote a song called “Monster,” how he felt about having her sing his words, despite her being from a different background. “I feel good about it, being able to give it to different audiences, in a different light, with your way of delivering it,” he said in the recorded phone call. Gadlin was released two years ago, but convicted of another crime—he’s now in a county jail, pending trial, and in the process of writing a new song, “Badd,” which takes the perspective of two women. “I’m so into music,” he told Boekbinder. “It doesn’t matter to me who it’s coming from, as long as the person, you, is giving it your all, being real about it, sincere.”

Proceeds from the Prison Music Project, Boekbinder says, will be donated to nonprofits involved with prison arts and re-entry programs. But she’s still trying to raise money to produce the album. It’s been a slow process. She’s aiming for a release date within two years, though. Filmmaker Alix Angelis is also on board, with the hope of turning the effort into a documentary.

One of the prisoners, Boekbinder told me, is set to be released next month after 13 years inside. She plans to meet him in Los Angeles and hook him up with a local gang-intervention group. He told her he wants to help forge a peace deal between the Bloods and Crips. (He’s a Blood). “But that’s a whole other story.”

Correction: This post has been updated to reflect new information that recordings from inside the prison will be for archival use only.