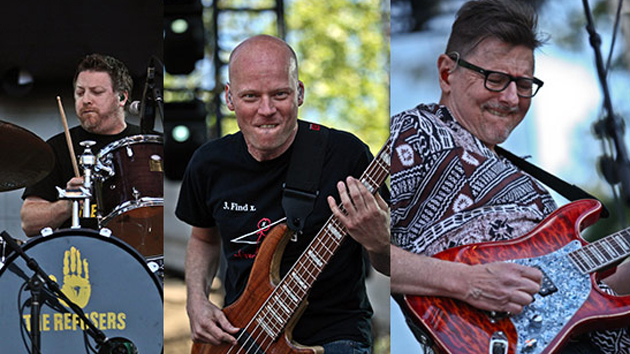 The Refusers rock against innoculation.Courtesy of Michael Belkin

Michael Belkin, the guitarist and lead singer for Seattle band the Refusers, can imagine what the masses might think about its anti-vaccination message. “I guess we’re about as popular as Pussy Riot was with Vladimir Putin,” he says over the phone.

Belkin, a former Wall Street strategist, says Russian protest rock has been an inspiration for his group, whose mildly funky rock seems at odds with the lyrics of songs such as “Vaccine Gestapo” (They’re a medical military priesthood / Just like Adolf, they preach the greater good) and “Vaccination Uber Alles” (If vaccines cause autism / We will blame it on the victim). “With a lot of music, there’s kind of no there there,” Belkin says. “Music should be challenging the status quo.”

“Don’t get me wrong, I’m not setting vaccination policy for anyone but my family.”

Challenging the status quo, presumably, has helped get the Refusers gigs at some fairly high-profile venues. They’ve performed at The Crocodile, the Seattle club where Nirvana and Pearl Jam played some of their earliest shows. They also scored a side-stage slot at Napa Valley’s 2013 Bottle Rock Festival, which featured Kings of Leon, Macklemore, and other big-name artists as headliners.

Protesters turn up at Refusers’ shows on occasion with signs that say things like “Pox Sux.” But the group’s fan base—which Belkin describes as “the alternate universe” of people who reject mainstream news and distrust the agenda of the corporations that produce vaccines, is growing, he says.

Oh, and by the way, he doesn’t view himself as an anti-vaxxer; he prefers “pro-healther.” “Don’t get me wrong, I’m not setting vaccination policy for anyone but my family,” Belkin says when I admit that I don’t share his views on the matter. “I fully support your right and the right of everyone at Mother Jones to vaccinate yourself into oblivion.”

He hasn’t always felt like this. Before he had children, Belkin says, “I was as gung-ho as anybody about vaccines. I assumed medical scientists knew what they were doing. I got vaccinated, and I was okay.”

The lyrics of “Stole My Baby Away” reveal what changed him: That evening, she stopped breathing / Her face turned blue / Oh lord, her face turned blue / There was nothing, nothing we could do. Belkin wrote the song about his infant daughter Lyla, who died in 1998, hours after receiving a Hepatitis B vaccination.

Lyla’s autopsy said she died of Sudden Infant Death Syndrome, but Belkin believes the cause was brain inflammation caused by the shot. He reads me the definition of encephalitis from the Merck Manual, a standard medical reference book. “Encephalitis is inflammation of the brain that occurs when a virus directly infects the brain or when a virus, vaccine, or something else triggers inflammation.”

“Or a vaccine,” he emphasizes.

It’s hard to argue with his grief. At one point, he brings up a common anti-vaxxer criticism related to studies on vaccine safety: that they typically replace only a single vaccine with a placebo. The placebo recipients still get all their other vaccines. There has never been a study, Belkin says, that compares the well being of vaccinated kids with that of totally unvaccinated ones.

When I mention the response from medical researchers that such a study would be wildly unethical, Belkin bristles. “That is such a lie,” he snaps. “I have one dead vaccinated child, and I have two unvaccinated children who are thriving.”

So the recent measles outbreak hasn’t changed his mind at all?

Belkin sighs. “In the cohort of my children, there is an epidemic of neurological damage,” he says. “Children are not dying of chicken pox and measles and things like that.” (That, however, is thanks to America’s relatively high vaccination rates. Measles killed an estimated 544,200 people worldwide in 2000, according to the World Health Organization. The global death toll was down to around 145,700 in 2013. The WHO attributes this 73 percent decline in deaths to the increased vaccination of children.)

Belkin, who told me he once worked for the investment bank Salomon Brothers, has come to view vaccines as just one aspect of “a very screwed up economic system.” The Refuser’s next album, American Dream, will be self-produced, much like First Do No Harm, the band’s debut: “Obviously no record company would touch this with a 10-foot pole.”

The album will explore other aspects of crony capitalism, Belkin says. He throws out a few song titles.

“‘You Won’t Read It in the New York Times‘: That’s about how screwed up the media is.”

“‘Born to Rock’: That’s about whistle-blowers rocking the boat.”

“Vaccines,” he says, “are just one little component of things you start caring about when you’re aware.”