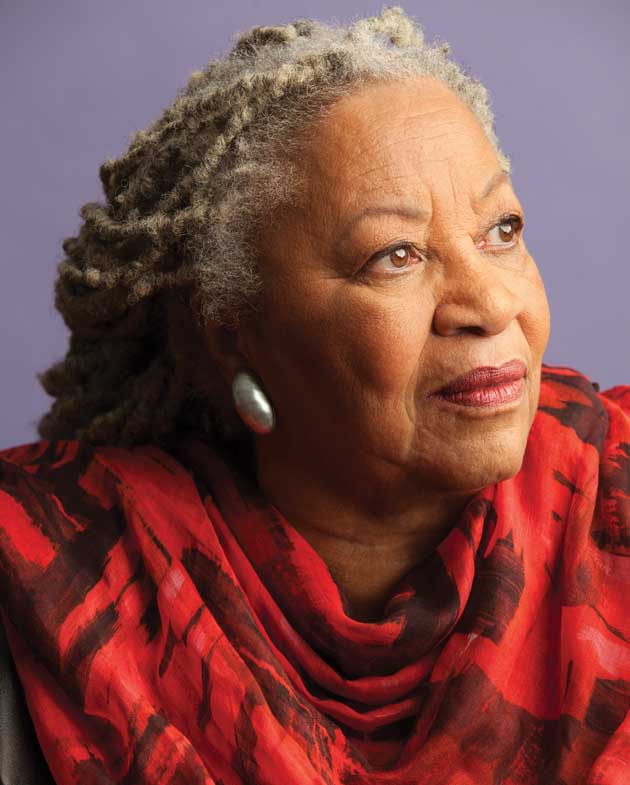 Toni Morrison is no stranger to historical fiction. Her last novel, Home, whisked readers into the shoes of a struggling Korean War veteran. A Mercy, the one before that, pictured life through the eyes of teenage bondswomen on a 17th-century Anglo-Dutch farm. And who could forget Beloved, her wrenching tale of a mother’s radical attempt to save her child from slavery in the mid-1800s?

But when the octogenarian author sat down to compose her 11th and latest novel, God Help the Child, she faced a new challenge. “I was nervous because I didn’t have a handle on the contemporary,” she told me. “It’s very fluid.” Leave it to Morrison, a recipient of the 1993 Nobel Prize in Literature and the Presidential Medal of Freedom, to find a way. Through Bride, her “blue-black” protagonist—who shines in the beauty industry but flails in her relationships—Morrison boldly examines the ways in which a hellish childhood undermines a person’s sense of self.

Mother Jones: How did the Bride character come to you?

Toni Morrison: I started the book before I wrote Home, but I was unsure of how to do it. And then I began to just look around at what people were doing and saying about themselves: You know, everybody’s naked, everybody’s gorgeous. I was very keenly aware of the new, wide-open, in many cases very healthy but certainly very aggressive sexuality. That becomes the success, particularly of a woman. Having looked at part of the Oscars, it was even more obvious. [Laughs.]

MJ: What about them?

TM: The clothes. The slits are higher, the breasts are prominent, which they always were, but now it’s just about nipples—the only part you cannot show. It just seems hysterical, because that’s the first thing any human gets in his mouth! I don’t know. I’m 84, so you can imagine how many phases of this I have witnessed.

“I’m 84, so you can imagine how many phases of this I have witnessed.”

MJ: Bride capitalizes on her unique looks to get ahead, but under the surface something’s not right.

TM: She’s very successful—you know, the “panther in snow.” But in her brain, she’s returning to that despised little black girl her mother didn’t even like.

MJ: Her “You Girl” makeup line is marketed for “girls and women of all complexions, from ebony to lemonade to milk.” Which seems empowering, and yet people fetishize Bride’s blackness. Was this an intentional jab at the beauty industry?

TM: In a way, but the interesting thing for me was that she was instructed [by an industry mentor] to never wear makeup. Her beauty is beyond makeup—and so she feels perfect. That’s not enough for me. You have to be a complete human being, and that has to do with your generosity. That’s what I wanted for her to encounter.

MJ: Bride’s mother thinks her daughter’s dark skin will be her doom. But didn’t your own dark-skinned great-grandmother view herself as purer than you lighter-skinned kids?

TM: She was very, very black. What she said was we were impure and tampered with. And we were little girls! The only other time I noticed what we call skin privileges was at Howard University. It’s a brilliant school. However, there was something called the “paper bag test”—whether your skin is darker or lighter than a paper bag. There were whole sororities that were proud that they had the lightest skin color. It was shocking to me. I wanted [Bride’s mother] Sweetness to make explicit the advantages of being a light-skinned Negro. She was under the impression that she had to protect her very black child from these insults. But inside, she shared that kind of revulsion.

“There were whole sororities that were proud that they had the lightest skin color. It was shocking to me.”

MJ: Sweetness says: “Nowadays blue blacks are all over TV and fashion magazines, commercials, even starring in movies.” Do you see Hollywood growing up, featuring more dark-skinned women?

TM: I think the audiences have grown up in making demands, so Hollywood has followed. They don’t much care, so long as it works.

MJ: The new book contains moments of magical realism. What inspired your literary fondness for the magical and the supernatural?

TM: My childhood was full of ghost stories, and I was very taken with Gabriel García Márquez’s first book, One Hundred Years of Solitude. It was a revelation that you can do those things—that you could have ghosts. That made a big difference in the way I could conceive of characters, so that it was perfectly logical for the dead girl in Beloved to come back. She was the only one who could judge her mother. None of us could.

MJ: I’m curious whether the title of your new book is an allusion to Billie Holiday’s “God Bless the Child”?

TM: No. I had an entirely different title, which everyone hated. I’m not even gonna tell you what it was.

TM: [Laughs.] No, I’m not going to tell you! I ended up with God Help the Child because Sweetness has the last word, which is, “You’re gonna be parents? Uh-huh, okay.” Parenting changes you. You have different concerns. It’s not all kitchy-kitchy-koo.

MJ: Why did you decide to focus on childhood trauma?

TM: The ideas come to me, I don’t search for them. In the process of putting together characters and their language and their interior lives, it shapes itself. I just began with a vague notion of what it must be like to be traumatized for something that has nothing to do with you. I mean, you didn’t kill anybody. You didn’t drop somebody on their head. You’re innocent. But you still have to deal with it—and how do you deal with it?

“What’s interesting is the invention, the creative thing. Writing about myself was a yawn.”

Even when you think you’ve had a wonderful childhood, I suspect there’s always some little drop of poison—that you can get rid of, but sometimes it just trails in the blood and it determines how you react to other people and how you think.

MJ: You evoke some disturbing, violent, sexual crimes in this novel and others. Does writing about such things affect you emotionally?

TM: It does, but I have the wonderful pleasure of finishing the book and closing it. And I don’t read them later.

MJ: Have you ever wanted to write more about your own life?

TM: My editor suggested that I change a two-book contract to one novel and a memoir. And I said okay, and then I thought, “I don’t think so.” A memoir? What’s interesting is the invention, the creative thing. Writing about myself was a yawn.

MJ: You’ve worked on operas, children’s books, lyrics, and plays. Is there any other form you’re eager to try?

TM: When you say it like that, I get suddenly exhausted! [Laughs.] I don’t think so. I think I’ll do what pleases me most, and what most challenges me, which is the novel.

MJ: How about a novel set in the future?

TM: No. I can barely deal with now.