When you think about the Kentucky Derby, what flavors come to mind? A refreshing mint julep? Pillowy biscuits propping up salty glazed ham? The sweet tang of pickled shrimp? Or how about…tamales? As radio journalist Tina Antolini discovered, that’s the dish that best embodies “the backside” of the Derby, where horse walkers, grooms, stable cleaners, and trainers live and work. The majority hail from Central America, and due to the migratory nature of the job and a lack of kitchen access, they rely on hot plates and crockpots to re-create their traditional cuisine. 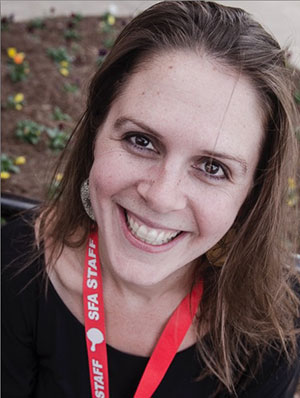 Antolini dug into this Derby subculture for an episode of Gravy, a new biweekly podcast from the Southern Foodways Alliance that explores a changing American South through the lens of food. The podcast’s host and producer isn’t exactly a good ol’ girl; Antolini grew up in a coastal Maine town full of “lobstermen and artists.” Her mom, a cookbook editor, would spend “three hours making a complicated deal for dinner,” so she developed an early interest in all things culinary. Jobs at pier-side seafood joints and upscale restaurants fortified her passion—food would become a theme in her reporting for New England Public Radio and later for the podcast State of the (Re)Union, for which she is still a senior producer.

Having a Yankee host doesn’t seem to have detracted from Gravy‘s allure. The podcast, along with its quarterly print version, won Publication of the Year at the 2015 James Beard Foundation Awards—a.k.a. the “Oscars of the food world.” Dorothy Kalins, chair of the awards committee, commended Gravy for its “humor and style” and for “giving voice to the unsung characters who grow, cook, and serve our food.”

“The food has to take us somewhere,” says Tina Antolini, host and producer of Gravy.

But don’t come looking for recipes—Antolini rarely gets into ingredient lists. Rather, she uses food as a launchpad for stories about race, culture, health, and business. “The food has to take us somewhere,” she told me. Episodes have covered water wars from the perspective of feuding oyster farms, the buried history of black culinarians, and military vets who turn to farming. And Gravy transcends geography. As illustrated by the Kentucky Derby episode, “the themes we are dealing with in these Southern-based stories,” Antolini says, “are really at the heart of understanding the United States.”