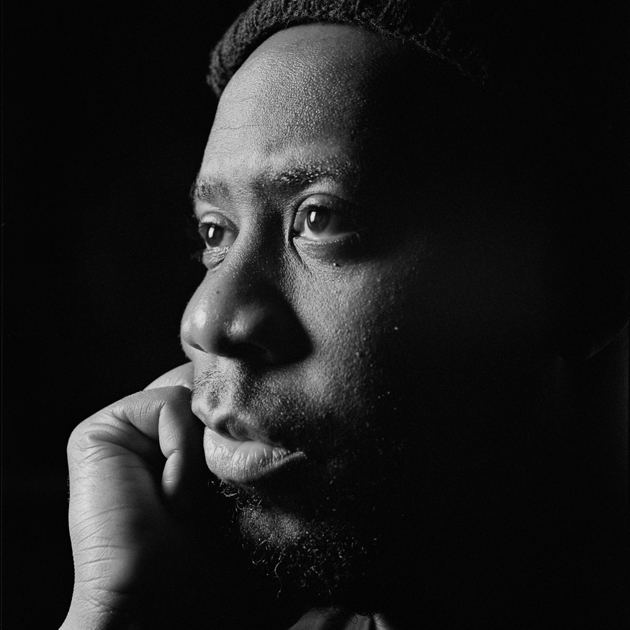 Pianist Robert Glasper is a leading figure in the contemporary jazz scene, but he has never been far from his diverse influences. And while he possesses a deep gift for invention and improvisation, his music often incorporates the chords and sequences fundamental to hip-hop, R&B, and modern gospel.

On his latest album, Covered, out earlier this month, Glasper features his original trio with bassist Vicente Archer and drummer Damion Reid. Recorded in front of a small audience at Capitol Studios, it reinterprets a wide variety of songs, including cuts from the Black Radio albums and alumni, as well as Joni Mitchell, John Legend, Jhené Aiko, Radiohead, and Kendrick Lamar—with the Victor Young standard “Stella By Starlight” for good measure. I caught up with Glasper as his trio kicked off a weeklong run at the Village Vanguard, the famed New York City jazz venue. He is currently on tour.

Robert Glasper: I’ve acquired a new audience. Around 2009, my audience started getting a lot more mainstream—younger people, R&B and hip-hop fans, mixed in with the jazz audience. Since those two albums, my audience has grown a lot bigger. I didn’t want to just go back to doing straight-up jazz standards or trio songs. We purposely did cover songs to make everyone happy. And it makes me happy, too. The kind of “jazz way” is just doing another album the same way with different songs. But I like to wait until I have a nice concept. Now I have another avenue that I can go down, that I have to go down, because of the audience I’ve acquired.

MJ: Is there any common element to the songs on Covered?

“When my friends were listening to hip-hop or R&B, I was in the crib listening to Billy Joel and Michael Bolton, Luther Vandross, and Oscar Peterson.”

MJ: Where do they come from then?

RG: I wanted to do a mix of old songs that I love and some new songs that I love, to keep it modern. I’m pretty eclectic, so that’s why I was like, Joni Mitchell, Kendrick Lamar, Radiohead, Musiq Soulchild, Jhené Aiko—I love that! That’s literally what my iPod looks like.

MJ: In past interviews, you’ve talked about using personal honesty—about the music you like and who you are—to navigate between genres and move your career forward. Where does that come from?

RG: It came from my mother. She passed away in 2004. She was a singer, and literally every day of the week she sang at a different club in a different genre of music: country, R&B clubs, jazz clubs, church on Sunday morning where she was the music director, pop hits, soft rock. She loved Broadway, Liza Minelli. I grew up listening to all this music, so it was never one thing for me. When my friends were listening to hip-hop or R&B, I was in the crib listening to Billy Joel and Michael Bolton, Luther Vandross, and Oscar Peterson. And she was always, “Yes, that’s who you are. It’s everything.” So I got that confidence to stick with that and not be ashamed of it from super early.

MJ: When you play a place like the Village Vanguard, which is a shrine to jazz, especially to jazz trios, do you find there’s still new territory to explore?

RG: What I’m doing now is kind of open territory. I don’t feel like it’s really been done the way that I’m doing it without it being smooth jazz. I think I’m walking a pretty fine line. There are a few specific things that I pay attention to that if you don’t, you’re gonna be in the smooth jazz lane.

RG: When it came to the Experiment band, it was the amount of solos you take. Once I started getting mainstream people to my shows, I realized we were taking too many solos, and they were too long. I started gauging when people were going on their iPhones. So we narrowed it down. Over the course of the whole night Casey Benjamin and I might only take one, maybe another in the encore. But we’re improvising at the same time, we’re grooving, and peoples’ heads are nodding, so you leave full. It’s just enough soloing for the mainstream person to be enlightened by that, but it’s not beating them over the head.

“Cannonball Adderley said, ‘First 20 minutes we’ll jazz out, then the last hour it’s gonna be songs that people paid to see.’ Which is why he was driving a Rolls-Royce.”

A lot of times, jazz musicians try to educate people. What other genre does that? When Cannonball Adderley did shows, he said, “First 20 minutes we’ll jazz out, then the last hour it’s gonna be songs that people paid to see.” Which is why he was driving a Rolls-Royce and everybody else was driving whatever. Miles Davis, too. I asked Herbie Hancock a few days ago, “When I hear bootlegs of Miles Davis with the ’60s Quintet, I never hear like, “Pinocchio,” or “Fall,” or “Nefertiti,” or any of those dope songs that y’all recorded. Why not?” Herbie said, “Miles wanted to play songs that people knew.” Jazz was struggling back then, too. But people knew standards. So that’s why they were going to play “Autumn Leaves.”

MJ: Besides the trio and the Experiment, is there a third approach you have been considering?

RG: I’m gonna do a gospel record, Black Radio style, kind of. I grew up in church. That’s how most young African American musicians learn how to perform. You could be six years old and playing organ or drums in front of thousands or hundreds of people. You’re performing every week. People don’t think about it like that, but that’s what it is. You’re in charge of emotion, and bringing certain things to fruition, and bringing all the spirit in. And it’s a real thing. I was playing drums in church when I was six. Then I picked up the piano when I was 11 or 12. A lot of the mainstream R&B people—or hip-hop or whatever, the whole urban world—are from the church. So this would be an album that everyone would love. 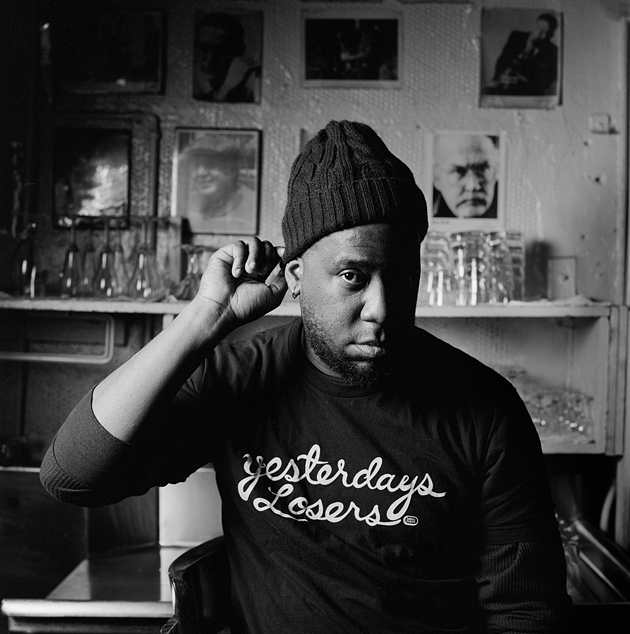 MJ: Both in your trio and the Experiment, I hear a central element of repetition, similar to a sample or loop. Is there a feeling you get from that—is it something hypnotic?

RG: That’s exactly what it is. I think there’s beauty in repetition. And that’s part of my culture and African culture as well: repeated things, mantra. It’s spiritual, it’s meditation, it’s Buddhism, it’s praying, it’s all these things. It’s the repetitive thing that brings space. That’s one of the things I love secretly about hip-hop. Jazz doesn’t have that element. It changes every bar, nothing is ever the same. Most jazz musicians get off on making it different every time. But that approach is not as spiritual. Coltrane would stay on one chord, and you’d keep hearing that one sound, over and over. He would play all kinds of stuff over it, but you just hear this one chord.

MJ: As Coltrane got more advanced, his music became simpler.

“If I was a singer who won those Grammys, I’d be gracing all the magazine covers… I barely got asked to do an interview.”

RG: Exactly. It became more about spirituality versus how many chord changes you can play over. That’s one of the things that I think a lot of people like about hip-hop, but they don’t even realize. Normally hip-hop repeats every four bars—it’s a very small chunk. And it’s about the head nod. I almost feel like it’s like full circle when I play with my trio. A lot of the origins of hip-hop are the sampling of jazz records, especially jazz trios. So I think, “Let’s mimic the producer who is sampling the jazz trio.” You see people close their eyes, and it takes them to another place. I almost think of it like we’re supplying the house, and the listener can move their own furniture in. Whatever you’re going through, we’re the soundtrack to your thoughts, and we’ll just leave space for you to move your shit in. I think people leave my shows feeling good. Instead of hearing, “Oh, he’s good,” I’d rather hear, “Wow, you changed my feelings today, you made me feel different.”

MJ: What’s hard for you?

RG: The hard part is balancing. I have a family, a five-year-old son—you know, life. That is probably the hardest part. The music is not hard to me. What is hard also is getting the respect of the mainstream. I won two R&B Grammys. If I was a singer who won those Grammys, I’d be gracing all the magazine covers, all the urban magazine covers, something. I barely got asked to do an interview. When we won the first Grammy, and we went backstage to do all the interviews after you win, holding the award and talking, people were like looking at their sheets going, “So, do you guys…sing?” “No, we’re an instrumental band.” “Oh, umm…” You know, it’s confusing! But if you ask people they say, “Oh! I love the music, Oh! I love that album.” Okay, well, give me those same opportunities. I’m trying to break down that barrier. I want to get that kind of love.

This profile is part of In Close Contact, an independent documentary project on music, musicians, and creativity.