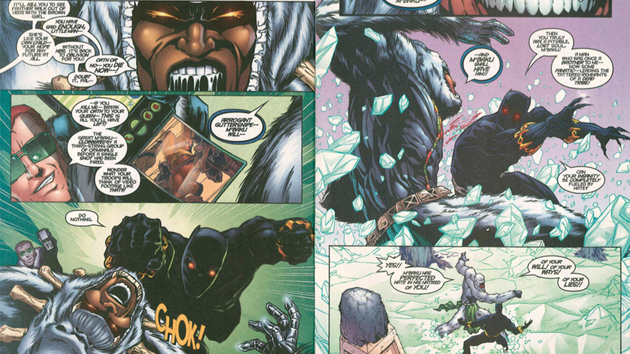 Scenes from a 2001 edition of the Black Panther comic book.

Unlike many of his peers at Marvel, Black Panther screenwriter Joe Robert Cole didn’t grow up a comic-book superfan, but he did have a soft spot for superheroes and a passion for storytelling. Fresh out of college at the University of California-Berkeley, Cole got his first gig writing for ATL, a 2006 film starring rapper TI and based loosely on the romance between producer Dallas Austin and singer T’Boz of the R&B group TLC. He went on to write and direct 2011’s Amber Lake, an eerie indie film about three half-sisters who turn on one another when questioned by the police about their father’s mysterious death. Most recently, he wrote an episode of FX’s acclaimed series American Crime Story: The People v. OJ Simpson.

“When I was a kid, I would change superheroes’ names: Instead of James Bond, I was James Black.”

Now, Cole, a product of Marvel’s two-year in-house writing program, is hard at work on the studio’s latest megaflick-to-be. The movie’s comic-book counterpart ran several volumes from the late ’70s to 2010, replacing the unfortunately titled 1960s comic Jungle Action, which featured the Black Panther, the genre’s first black superhero. The story revolves around warrior king T’Challa (Black Panther), who hails from the technologically advanced, fictional African kingdom of Wakanda—which has never been colonized, unlike the other countries on the continent.

The latest iteration of the Black Panther comic book, written by Ta-Nehisi Coates, is due to launch in April. Ryan Coogler (Fruitvale Station, Creed) has signed on to direct the movie, which is slated for release in July 2018. Playing T’Challa will be Chadwick Boseman, who makes his big-screen debut as Black Panther in this summer’s Captain America: Civil War. Boseman also portrayed Jackie Robinson and James Brown in their respective biopics, and he plays the legal heavyweight Thurgood Marshall in the upcoming Marshall. I caught up with Cole, the Black Panther screenwriter, to talk about diversity in Tinseltown, and why we desperately need black superheroes.

Mother Jones: What were you doing before you started writing scripts?

Joe Robert Cole: I figured out I wanted to tell stories in college. I’m an only child who moved around a lot growing up, and I really feel like it prepared me to be a storyteller—to make up stories and pretend to be every hero from every movie and TV show as a kid. So it was a natural progression.

MJ: You’ve only written and directed one film, plus a little bit for TV. Were you surprised when you were approached to do Black Panther?

JC: No. Having gone through the [Marvel] writer program, I knew Black Panther was in the pipeline and I knew they were big fans of my writing. But I had to compete with the other writers who were put up for it—no one hands out jobs. 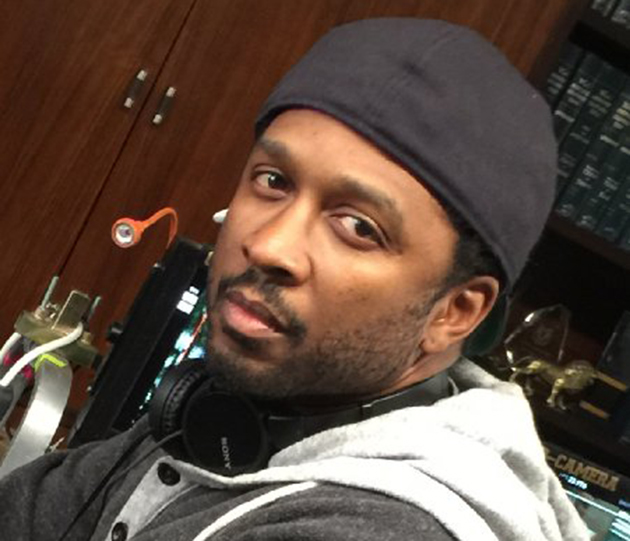 MJ: What does it mean to you to be writing a black superhero?

JC: Black Panther is a historic opportunity to be a part of something important and special, particularly at a time when African Americans are affirming their identities while dealing with vilification and dehumanization. The image of a black hero on this scale is just really exciting. When I was a kid, I would change superheroes’ names: Instead of James Bond, I was James Black. Instead of Batman, I was Blackman. And I have a three-year-old son. My son will be five when Black Panther comes out. That puts it all into perspective for me.

MJ: Ta-Nehisi writes that he sees T’Challa’s blackness as an opportunity to explore some of the history of the African continent and the myths that are unknowns in the Western consciousness—unlike, say, the Greek myths. What kinds of themes do you want to explore in the film?

JC: We’re in the process of figuring many of those things out. I think approaching the movie from a perspective that is rooted in the cultures of the continent is important. 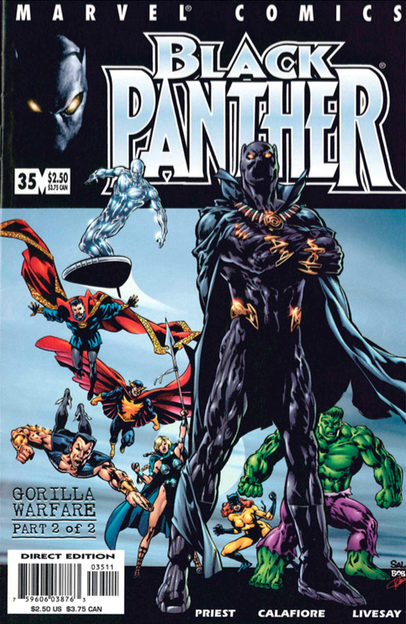 MJ: In the comic books, Black Panther fought off a colonizer in Wakanda. He fought the Klan. He fought against apartheid in South Africa. Bringing the Panther into the present day, I’m curious how the recent activism around the treatment of black people by police might inform your story or your development of T’Challa as a character.

JC: Personally—and Ryan [Coogler] and Nate Moore, the executive producer—we all are cognizant of what’s going on in the world, in black communities, and in our country. We are aware of the importance of that, and the platform this movie provides us with. But I can’t give you the specifics.

MJ: Is Ta-Nehisi involved in the thought process for the movie?

MJ: You’re African American but your character is African. In what ways do you expect that you will and won’t relate to him?

JC: That’s a really good question. I write characters focusing on them as human beings, and then you wrap them within a culture. So I think I can connect with him as a person with brown skin who’s viewed differently by the world. In terms of his culture, we’re thinking about where we are locating Wakanda within the continent, and what the people and history of that region are like. It’s a process of investigation to help inform the story at this point. But we are going to be engaged with consultants who are experts on the continent and on African history and politics.

MJ: In the comic, Wakanda is one of the planet’s most technologically advanced nations. How do portray that level of technology without “Westernizing” the country’s culture?

JC: That’s one of the many questions that excite me. I think you try to extrapolate from the early civilizations and cultures of the continent, kind of looking for unique ways they set themselves apart from Western civilizations, and then pursue those avenues technologically and see where that takes you.

MJ: Let’s talk a bit about diversity in Hollywood. There’s pretty clear gender discrimination in TV and film. What has been your own experience vis-a-vis people of color, and black people especially?

Hollywood’s diversity problem “will take a considerable amount of time to rectify. It’s very difficult because it starts at the top.”

JC: Historically, opportunity has been afforded to a limited pool of people, excluding people of color and women. That doesn’t diminish the talent or hard work of the people within that pool, but it does narrow the field of stories that have been told, and of the creative ideas and perspectives out there. And this problem compounds itself by limiting the number of people in the pipeline to attain the experience to do larger movies or get jobs so they can familiarize themselves with a studio head and get the opportunity to deliver and impress—or maybe direct a smaller movie. It will take a considerable amount of time to rectify. It’s very difficult because it starts at the top.

MJ: It sounds like Marvel’s writing program helped you get a foot in the door.

JC: It familiarized Marvel with my work and with me as a person. Being able to interact with [studio president] Kevin Feige and have him know who I am and know me as a person, and be able to then sit down and have a conversation about story with someone who’s familiar and comfortable is invaluable.

MJ: Do you see a role for yourself in creating more roles for people of color? As Viola Davis points out, there aren’t many.

JC: I’ve had a conversation with her about this, actually. Yes, absolutely. I had two smaller scripts that I had written with full black casts. And people loved the scripts, but nobody would fund them. Those roles and stories are out there. But unless you have the money to finance movies on your own, you’re beholden to others, and that is a very big limiting factor. 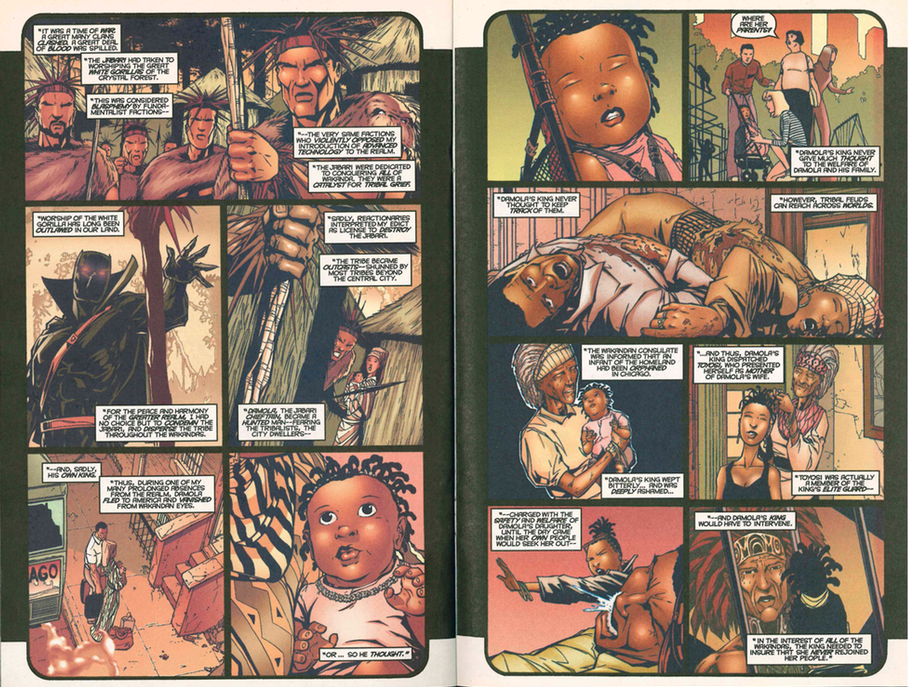 MJ: Why do you think the money people shy away from a black cast? Do they see it as too niche?

JC: Well, TV does a better job. In film, the justification has been that movies focused on stories or featuring people of color don’t make money. But with the success of Straight Outta Compton and Creed, and shows like Empire and How to Get Away With Murder, I think that’s becoming a harder argument for companies and studios to make—to the point where it is viewed more of an excuse than reality at times.

MJ: At the extreme, you have movies like 2014’s Exodus: Gods and Kings with all white leads. Last year we had Stonewall, about the 1969 Stonewall Riots—the producers cast a handsome white guy as the lead when the leader of the riots was a black trans woman. This month, Gods of Egypt comes out—with all white leads. Why, in this day and age, do casting directors continue to cast white actors to play characters of color?

JC: Not enough diverse voices in the room. The individuals who made those movies may not have malicious intent—they just don’t know. There wasn’t that person going, “This isn’t acceptable. This is disrespectful. This isn’t accurate.” I wish I had been in the room. I would have put Chancellor Williams’ The Destruction of Black Civilization on the table. [Laughs.] “Read this book and then let’s discuss it.” Because then we can figure out a happy medium.

“The justification has been that movies focused on people of color don’t make money. But…that’s becoming a harder argument for studios to make.”

MJ: Do you think that’s also related to the fear that a diverse cast will turn off some moviegoers?

JC: Yes, of course. When you start talking about movies of that size, they’re trying to sell globally to foreign markets. So there is an economic question that can’t be ignored, and that’s a fair discussion to have. But maybe it’s not the time to make that movie if you can’t depict people accurately.

MJ: Is there any reason to fear that some people might dismiss Black Panther as something for black audiences?

JC: I don’t think so. There is a huge fan base for the Black Panther comic and for Marvel as a whole. And I think there is great anticipation across the board for the movie. I think that’s how Marvel is approaching it and I know that’s how I’m approaching it. I imagine Ryan feels the same way.