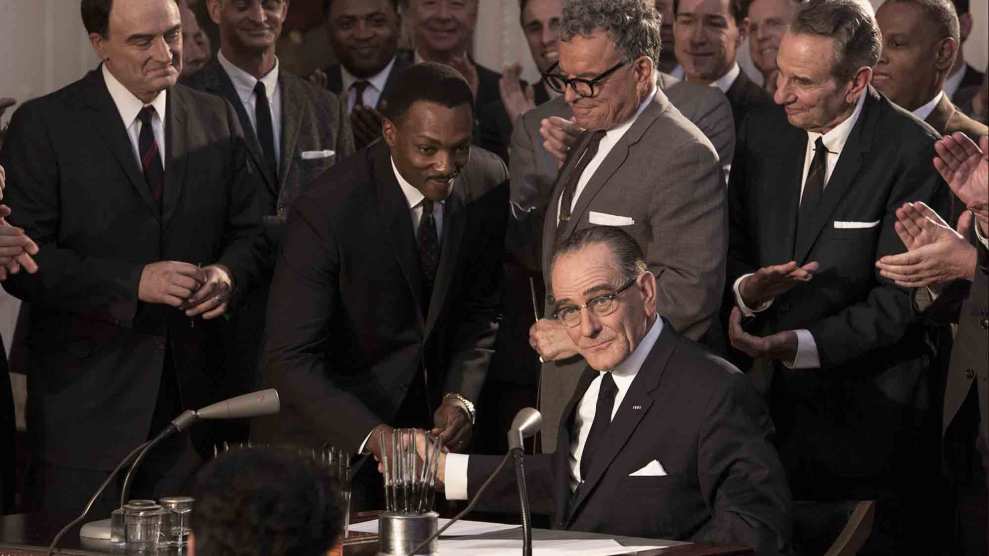 It’s an age-old question: how to balance principle and compromise. In All the Way, the new HBO film based on the play by Robert Schenkkan and directed by Jay Roach (Game Change, Recount, Trumbo, Austin Powers), the star attraction is Bryan Cranston’s masterful portrayal of President Lyndon Baines Johnson in the year after JFK’s assassination, as LBJ lied, wheedled, and bullied his way to passing the historic Civil Rights Act of 1964 and then won the presidential election of that year. Cranston’s transformation into a man brimming with brio and confidence and also profoundly burdened with anxiety, insecurity, and paranoia is one of the best cinematic depictions ever of an American president. (Move over, Daniel Day-Lewis.) But the true beauty and power of the film is its engaging exploration of the inelegant (if not often ugly) nexus of politics and policy. In All the Way, Johnson is a pathological prevaricator who personally betrays his closest political allies (who happen to be Southern Democrats and racists)—but it’s all for the greater good of ending segregation. And it works. But there’s a high political price: In the film’s telling, Johnson has doomed his party in the South. (Indeed, Richard Nixon would capture the White House four years later, partly due to his “Southern strategy” of exploiting white resentment and racism.) And, of course, on the other side of the ledger, Johnson’s conniving conduct sunk the nation deeper into the bloody tragedy of Vietnam—and the film notes how that mighty mistake overshadowed his significant accomplishments. Yet All the Way ultimately chronicles a moment when good was achieved—but by a greatly flawed man using dishonest means. That’s what makes the whole damn thing so fascinating.

I talked to Roach about how he turned Schenkkan’s much-acclaimed Broadway play into this gripping political morality tale, which premieres on the cable network on May 21.

Mother Jones: You’ve directed films about modern politics, as well as the Austin Powers movies. But more recently, you’ve gone back in time. You directed Trumbo and now All The Way. What drew you to the LBJ project?

Jay Roach: I saw Robert Schenkkan’s great play on Broadway, while Bryan and I were prepping for Trumbo. Steven Spielberg and HBO reached out to me to see if I wanted to direct the adaptation. I said yes immediately, then realized I was committing to back-to-back projects with Bryan without knowing if Trumbo was going to work out. Could have been awkward. Thank goodness, it wasn’t.

It’s always about story for me. I was drawn in by the incredible predicament LBJ finds himself in in November 1963. He’d wanted to be president his whole life, but after JFK’s assassination, LBJ becomes the “accidental president.” He knows he is perceived as the usurper. However, rather than just consolidate power to win the 1964 election, he chooses to pick up Kennedy’s agenda and immediately joins up with Dr. Martin Luther King and takes on one of the most controversial pieces of legislation he could have prioritized, the Civil Rights Act. In doing so, he lost the support of the South, which he thought he needed to get reelected. I think this proves how sincere he was about civil rights.

MJ: The film looks at politics at a time when segregation was legal and Southern Democrats on Capitol Hill were the obstructionists trying to block civil rights. What about this is relevant today?

JR: Because of the horrible history of Vietnam, most people forget how much was accomplished during LBJ’s term. He worked closely with Dr. King and the other civil rights leaders, and also with representatives and senators from both parties, to push through the Civil Rights Act of 1964. That helped protect the rights of minorities and women, and it is still being used today to protect the rights of gay and transgender people. And then LBJ passed the Voting Rights act of 1965, re-enfranchising millions of Americans who had been frozen out of the democratic process. He also passed other crucial legislation that improved the quality of life for millions of Americans for generations: Medicare, Medicaid, and 60 separate pieces of legislation funding public education, including Head Start. He pushed through major funding bills for transportation, immigration reform, the environment, and the arts (which led to funding for PBS, NPR, and the American Film Institute).

It’s incredibly encouraging to remember that when we elect presidents and representatives who believe that government can work to improve the lives of citizens, we can actually accomplish much for Americans. In those early years, Johnson did put the country first—above party and above personal advancement—and he solved problems.

MJ: In the movie, Johnson is depicted as a man who could be full of confidence and simultaneously riddled with deep insecurity, paranoia, self-loathing, and anxiety. How did that affect his ability to be a leader? Did that make him a difficult character for Cranston to play?

JR: Johnson was an incredibly capable leader, but he was also deeply flawed. After JFK, he knew how he would be perceived—as the usurper from Texas, doomed to perpetual comparison to President Kennedy. And he was to some extent innately anxious, restless, insecure, even self-pitying. You can hear all that in the many phone calls recorded when he was in office. That was part of the attraction for Bryan in taking on this part. Complex characters are what every actor prefers. Directors, too. For both of us, this was an opportunity to tell a story that goes behind the history—to the psychology of the man, possibly even to the heart and soul of the man.

MJ: Johnson did whatever it took to get the Civil Rights Act of 1964 passed. He lied. He cut deals. He compromised. Are there any lessons here for President Barack Obama or other modern-day politicians?

JR: I can only hope the film becomes part of the conversation about what is needed for great leadership, what is required to solve problems for citizens and to raise us up as Americans. For LBJ and for Dr. King—and for the legislators from both sides that they worked with—compromise was not a dirty word. Those who remained inflexible— the segregationists—lost their battles. They were too dogmatic to keep up with history. I hope that for those people who continue to resist the full application of civil rights for every person in our country, this is a cautionary tale.

MJ: My teenage daughter saw the movie with me. Afterward, she asked, “Why does everyone today say John Kennedy was a great president and no one knows much about Johnson?” As you made this film, did you think that Johnson has been shortchanged in popular culture and public history? Might that because of Vietnam and because he essentially left the presidency under a cloud by withdrawing from the 1968 race?

JR: When we look back in time, it’s hard to see through the horrors of Vietnam, which were to some extent rightly pinned on LBJ, It’s tough to recognize and remember all of LBJ’s incredible accomplishments, all the hundreds of important pieces of legislation he was able to pass by working with both sides, throughout his administration. It didn’t help him, either, to be sandwiched between JFK and Nixon in the national timeline.

MJ: In All the Way, Cranston is physically transformed into LBJ. Was that necessary for the movie to succeed? You did not do the same with Anthony Mackie, who played Martin Luther King Jr. and who played him in what might be regarded as an understated fashion.

JR: I work to give every actor what he or she needs to fully interpret a historical character, to feel like the character when he or she walks out on the set. Bryan’s transformation worked for him, and it works beautifully for the story. But Anthony and I talked at great length, and we decided not to try to impersonate Dr. King. Instead, we wanted to channel the essence of the man, especially as he might have come across when he was hammering out political strategy in rooms with the other civil rights leaders. Dr. King is so iconic. We all know what a great speaker he was. And we present some of that, but we also learned, as we watched tapes of his interviews, that he was incredibly strong and calm and quietly powerful in rooms when he was out of the public eye and collaborating with others.

MJ: Bobby Kennedy is a looming presence in this movie, yet he does not appear as a character. What led you to keep him off-stage?

JR: In the play, Robert Schenkkan made the choice to keep Robert Kennedy off-stage to serve as a sort of exaggerated figure of fear for LBJ—a combination of real and imagined threat. (LBJ worried constantly that RFK would step in and run for president, eliminating Johnson’s ability to rise above being the “accidental president.” ) It was an expressionistic choice, but not a big reach. RFK remained attorney general after JFK’s assassination, but he was not that active in the civil rights fights. He was running for Senate, and LBJ helped him campaign, but that story wasn’t so relevant regarding the fight for civil rights.

MJ: You’ve now worked with Bryan Cranston on two projects. What can you tell us about him that fans of Breaking Bad and his films may not know?

JR: I’ve worked with Bryan in two very serious roles, but it turns out he’s an extremely funny man. Between takes while we were shooting All the Way, he would sometimes stay in character as LBJ. This was not for any “method acting” reasons, but so he could harass us all in hilariously aggressive ways, using LBJ’s larger than life “Texas Twists,” his Texas accent, and his pre-sexual-harassment-law political incorrectness. Throw in Bradley Whitford [who plays the role of Sen. Hubert Humphrey] doing a fantastic and fully inappropriate imitation of Bill Clinton, and Frank Langella [who plays Sen. Richard Russell] doing his Nixon, and you had a pretty funny Oval Office experience between takes. The Three Amigos of the presidency. They were walking around the set, talking about the pluses and minuses of secretly recording calls and conversations in the Oval Office.