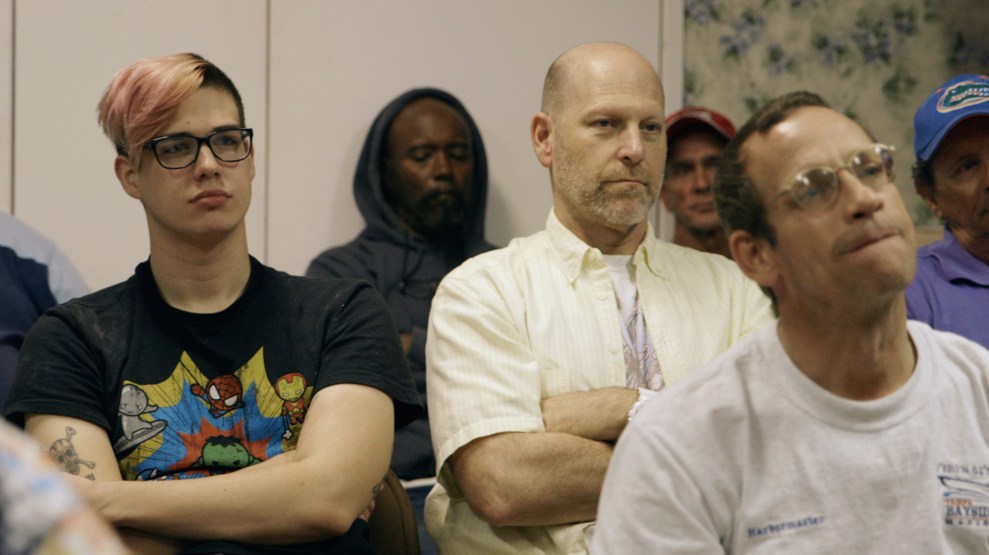 In a trailer park outside St. Petersburg, Florida, where around 120 convicted sex offenders live and receive counseling, Tracy Hutchinson broke down on camera. Hutchinson, a convicted sex offender, had never told her story before, even in therapy. Now, she was revealing to Frida and Lasse Barkfors, a pair of Scandinavian filmmakers documenting the lives of the trailer park’s inhabitants, what her father had done to her: “We went down the hall to the bedroom, and he locked the door, and he said, ‘You know that you’re daddy’s girl, and I love you, and I just want to share this with you.”

Many years later, as an adult, Hutchinson sexually abused her son. He, in turn, abused a three-year-old child. Lasse, listening to her story from behind the camera, had tears in his eyes. Every few minutes, Frida gently asked a question. Otherwise, she just let Hutchinson talk.

Pervert Park doesn’t flinch from its subjects’ crimes, but it refuses to define them solely by their offenses.

“It was like a need in her almost, to tell her story, that no one had wanted to listen to before,” Frida says. “That we came in the park with an open mind and said that we just wanted to listen—was very unusual for them.”

The Barkfors’ documentary, Pervert Park, doesn’t flinch from the crimes of its subjects, but it refuses to define them solely by their offenses. The result is a provocative look at the lives of convicted sex offenders and the cycle of abuse—as well as at a counseling program that could offer a model for rehabilitation. (According to the film, less than 1 percent of the park’s residents have been convicted of another sex offense after completing the two-year program.)

“When we made the film, we were quite certain that no one wanted to see it,” Lasse says. That goes especially for American viewers, whom the pair expected to be particularly hostile to the notion of humanizing sex offenders. But Pervert Park will debut on PBS tonight (10 pm ET) after months collecting praise on the festival circuit. I caught up with the filmmakers to discuss how one tells such stories responsibly, and why it’s important that they be told.

Mother Jones: The idea for this film came from a newspaper article about Florida Justice Transitions. How did you pick it up from there?

Frida Barkfors: We started out believing we were going to make a film that was a little more anthropological about the place itself. We read this article about five years ago, and the park was described as this parallel society where the sex offenders didn’t want to reintegrate into society—and couldn’t. As soon as we got to the park, we realized that what’s stated in the article wasn’t really accurate. They did try really hard to reintegrate to society, and they had this housing program where they were trying to be contributing citizens.

MJ: What were your attitudes toward the sex offenders when you began?

“In the beginning we were quite cautious. We wanted to stick together while we were shooting.”

Frida: We had completely bought into the mainstream media portrait and didn’t think there was much more to tell. Meeting the sex offenders was kind of a journey for us. In the beginning we were quite cautious. We wanted to stick together while we were shooting. But we got less and less scared, because we saw the people behind the crimes. It’s not like sex offenders are sex offenders only. The story’s much more complex. That provoked a lot of emotions and thought processes in us, and that’s what we wanted to share with the audience.

Lasse Barkfors: It’s also a very simple idea, in the end, to listen to someone who is [seldom asked to speak]. What happens if we see what they have to say? Is that useful for us?

MJ: You said you completely bought into the mainstream portrayal of sex offenders. And what would that be?

Frida: We see them as monsters controlled by their sexual lust, with a lack of morals. We see them as dangerous. [But] there’s a really fine line between the victim and the abuser, because there are so many abusers who are untreated victims. They were once these innocent victims. But they weren’t able to get treatment, so they acted out and became abusers themselves.

Lasse: Of course, the stories that always comes up in the media are the very harsh ones and the awful ones.

Frida: We see sex offenders as the worst of the worst. We talk mostly about these stories where they’re hiding in the bushes, waiting for a child to kidnap and molest and maybe even murder. But those incidents are extremely rare. We were trying to show the diversity of the sex offender label. From Patrick—who kidnapped a five-year-old girl in Mexico and raped her in the desert and left her there—to Jamie, who was looking for a 30-year-old [sex worker] and was caught in a sting when [the prostitute] wanted to include her 14-year-old daughter. It turned out to be a police officer. There are also stories of people in the park who have urinated in public and are now convicted sex offenders.

MJ: What are some of the biggest misconceptions about your work?

“There are many pedophiles who will never act out, because they know the emotions they have are wrong.”

Frida: People say we made a film about pedophiles. In fact, there’s no pedophile featured in our film. Not even Patrick is a pedophile, because being a pedophile is a sexual orientation. Being a sex offender means you have abused someone sexually, but it doesn’t mean that you have a lust to be together with kids. There are many pedophiles who will never act out because they know the emotions they have, the lust they have, are wrong. Then there’s the combination of a pedophile and a sadist, and that’s really dangerous. Those are the cases we read about in the newspaper, and those are the cases that we base our laws on.

MJ: Compassion for sex offenders is central to the film. But relating to them, especially those convicted of really violent crimes, had to be a challenge. How did you accomplish that?

Frida: That’s the core question for us. How can we listen to these people without minimizing their crimes? What we realized is that you can actually have empathy for a person at the same time that you despise their crimes. We have this tendency to paint people in good colors and bad colors, but it’s more than that. These people need treatment. Some of them are still minimizing, and some of them are still excusing, and they’re not completely healed, but I feel that a lot of them are working on becoming better people. So it’s very complex.

MJ: Why did you not include the voices of the victims?

Frida: There are so many films that are made from the classical victim perspective. We wanted to give a voice to the people who are normally not heard. And there are victims in our film. You can be a victim and an abuser at the same time. I think we show very clearly—for instance, in the interview with Tracy—how it’s passed on throughout generations.

MJ: Still, I’m sure some viewers would feel that giving voice to the abusers silences the victims.

“We made the film because we thought that it was helpful for everyone.”

Frida: I was once like that, so I understand. I remember thinking, “I don’t want to listen to their story.” But we’re trying to help widen the debate. Making this film, we worked very closely with victim organizations, lawyers, and defenders of victims of sexual abuse, and also psychologists and therapists. They all say this is crucial for victims to heal, the abuser’s story being told. That was the purpose: We made the film because we thought that it was helpful for everyone.

Lasse: These people walk around with this their whole life without telling anyone, because it’s so shameful. I think a lot of them really need to talk about it in order to move on.

Frida: After a screening, people have come up to us and said, “I am a victim of sexual abuse, and thank you for making this film. I now understand my abuser much better than I used to.” They struggle with a lot of emotions, but if they can understand their abuser, it’s easier for them to heal.

MJ: I suppose it would help answer the question, “Why did this happen to me?”

Frida: Don’t get me wrong—the victims have no responsibility whatsoever. I completely understand why we as a society don’t want to talk about [the offenders], because we think that we’re protecting the victims. But that’s counterproductive.