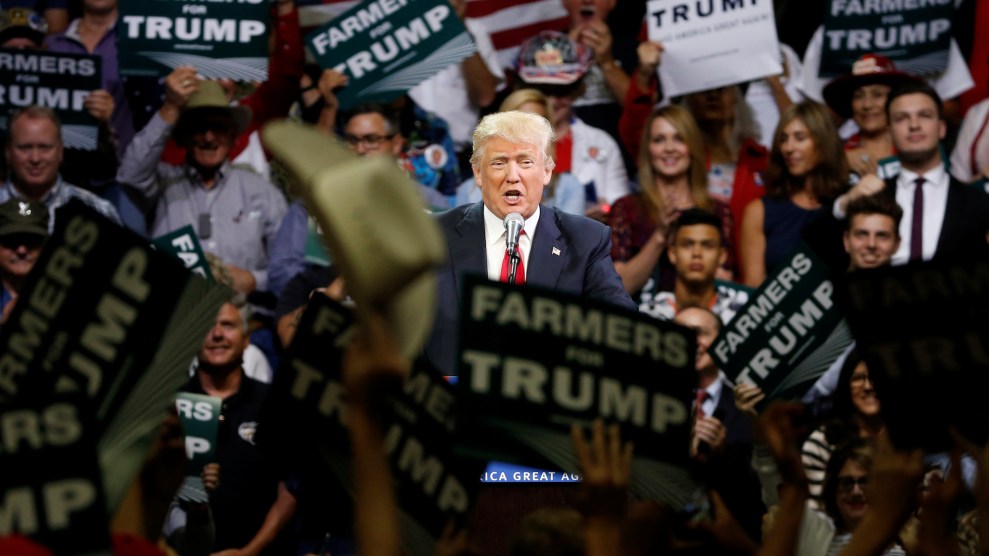 Back in May, Trump delighted a crowd in Fresno, the heart of California's Central Valley, by insisting "there is no drought"—the only problem is that politicians are "shoving it [water] out to sea" to "protect a certain kind of three-inch fish." <a href="http://www.zumapress.com/zpdtl.html?IMG=20160527_zaa_r01_1126.jpg&CNT=3">Jonathan Ernst</a>/Zuma

Republican presidential nominee Donald Trump churns out strong opinions like McDonald’s produces Big Macs. But save for the odd eruption—like declaring the supremacy of Trump Tower Grill’s “taco bowls” or blaming the California drought on environmentalists to the delight of the state’s agribusiness interests—he has been relatively quiet about food. At last month’s Republican National Convention, the real estate developer and reality TV star took a step toward filling out his food and farm policy by tapping Nebraska agribusiness owner and cattleman Charles Herbster as the chairman of his Agricultural and Rural Advisory Committee.

Like Trump, Herbster is an unconventional business titan with political ambitions.

And that appears to be where Herbster comes in—reassuring farm interests that a Trump presidency wouldn’t mean reduced access to foreign markets.

He and his wife own Conklin, a Kansas City-based company with an odd mix of product lines: pesticide additives called adjuvents; fertilizers for farms and lawns; probiotics for livestock, pets, and even people; industrial roof coatings; and motor oils for “everything from semis to farm equipment to race cars.” In addition, he owns a cattle-breeding company called Herbster Angus Farms as well as farmland in Nebraska and Colorado, for which he received a total of $196,757 $577,179 in farm subsidies between 1995 and 2014, according to the Environmental Working Group’s Farm Subsidy Database. (Note: After this piece went live Monday morning, an EWG press person emailed me to note that in addition to the $196,757 Herbster took in under his own name, Carico Farms, for which Herbster is listed as the owner, received $380,422 between 1995 and 2014.) That’s still not a particularly high number—many Nebraska farm operators got much more over that time frame.

Herbster’s largesse to politicians hasn’t been limited to McCoy’s failed bid. Politico notes he “has given $336,000 to Republican candidates and ag-related PACs since 2012.”

He is a major funder of Ag America, which describes itself as a “Federal Super PAC active in local, state, and federal elections.” Herbster sits on the Ag America steering committee, and according to the money-in-politics tracker Open Secrets, he donated $60,000 to it in 2015. Other recent contributors include Monsanto, DuPont, Archer Daniels Midland, and several other agribusiness giants.

Herbster said he reassures them that Trump “is not against trade in any way”—it’s “just that he wants trade to be fair.”

That last bit would seem to contradict Trump’s oft-stated antipathy to the Trans-Pacific Partnership, a pending trade deal that was hotly supported by the agribusiness lobby.

And that appears to be where Herbster comes in—reassuring farm interests that a Trump presidency wouldn’t mean reduced access to foreign markets.

On a recent afternoon, I caught up with Herbster by phone on a corn field on his Nebraska farm after calling a number I found on the website of Herbster Angus Farms. I was quite surprised when the man himself answered the phone. After volunteering that “I’ve been friends with Donald J. Trump for more than 10 years,” Herbster told me that he’s been getting calls from farmers “concerned about issues of trade.” Herbster said he reassures them that Trump “is not against trade in any way”—it’s “just that he wants trade to be fair,” and that means renegotiating trade deals. Herbster acknowledged that “trade for agriculture in the Midwest has probably been pretty good for the past few years,” but that it “hasn’t been good for small manufacturers in middle America and the coasts.” Trump, he suggested, would make trade great again for everyone.

I asked him to specify what regulations he sought to dismantle. “We’re not gonna pinpoint and try to detail the minutiae of all of those, because the first thing we have to do is we have to win,” he said. “I believe we are gonna win, but I’ve always said, ‘Until you win, all of the great ideas in the world aren’t going to help you, because you have to win to implement ’em.'”

Rather than sweat policy details, “my focus…is to make sure we get rural America out to vote, that we raise as much money as possible,” he said, adding that “it’s gonna take a lot of money for this campaign, because we saw what happened with Romney versus Obama.”

Meanwhile, Herbster said, he’s working to assemble a group of people to serve with him on Trump’s ag policy committee, which will be announced the first week of August. “Everyone’s gonna pretty well know the names on that list—we have some governors, we have some former governors…we’ve put together a really great list.”

I pressed him for more policy details, but he politely hustled me off the phone. “I don’t want to be rude, but I’ve got concrete being laid at the farm,” he said.