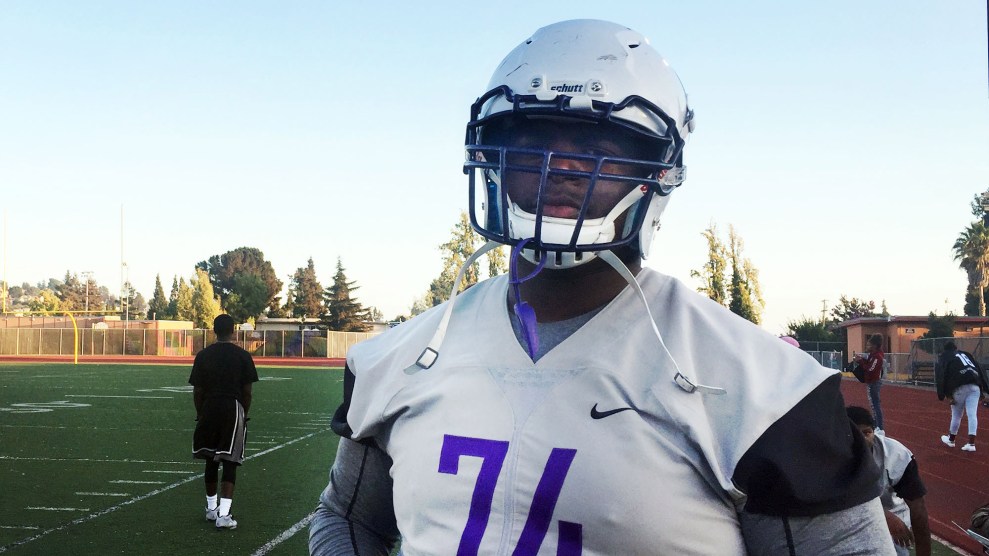 Editor’s note: On September 23, the football team at Castlemont High School in Oakland, California, made headlines when a San Francisco 49ers quarterback joined it in a pregame national-anthem protest for racial justice. Jadan Starks, a senior nose guard who helped spearhead the viral demonstration, talked to MoJo‘s Edwin Rios about how it came about and what Kaepernick’s support has meant for him and his teammates. For more of Rios’ reporting on the team, click here.

I was at home on Facebook, and I had seen another video of someone getting killed by the police. He was on the ground, not resisting at all, and he was just getting trampled by two policemen, and one of them just shot him. And I told my teammate William Perkins, “Man, this is sick. We can’t even trust our own police.” 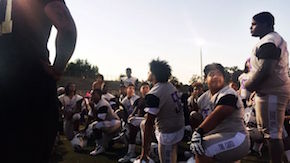 We were just getting all into it. I was like, “We playing Canada this week, right?” I knew we’d be playing the national anthem because we had a team from Canada coming in, so I said, “Why don’t we take a knee just like Kaepernick did?” And he was like, “I’m with it.”

Right after practice, we talked to Coach [Benjamin] Arnold. All three of us went to Coach [Edward] Washington. We said, “This is what we want to do.” He was behind us. As long as they keep playing [the national anthem], we’ll continue to do it.

We had to make sure no other players were against what we were doing. We had to make sure they knew the true meaning of the protest without the “F— the Police.” With them being from this area, they knew it personally. But mentally, they have to know we’re doing this. We’re going to deal with a whole lot of politics. From a political stance, why are we doing this? We can’t just do it because that’s how we feel.

The underlying message is: We’re tired. What do you want us to do? You want us to just sit here and just take this?

The underlying message is: We’re tired. What do you want us to do? You want us to just sit here and just take this? It’s not right. It’s not right to just be harassed by someone who is supposed to be like us. How are we ever going to be united and be a unit when we don’t even trust the people upstairs?

We’re outraged. It didn’t just happen a year ago or two years ago. It’s been happening for hundreds of years. It’s not right. We need to move forward. We’re never going to move forward as a country unless we get these issues out the way—not just for black people, but for people of color. We could have some type of equality in our system where everyone can be themselves and not be penalized for it like this.

After the Canada game, there were a lot of people retweeting our picture. Our coach had brought it up to us: Beware of the media, because it’s going to hit y’all hard. As far as I’m concerned, we got all of Oakland behind us. They understand it, and they know the struggle of dealing with police. It’s a struggle. Period. You can’t get anyone who hasn’t been in the situations we’ve had to understand what we are going through. We stand strong by what we are doing.

Instead of just kneeling, we kind of wanted to separate ourselves with a stronger message. That’s why we decided to lay on the ground with our hands up.

Still, I didn’t expect Kaepernick getting a hold of it. As far as the game in Sunnyvale, we actually thought about it through the week. Instead of just kneeling, we kind of wanted to separate ourselves with a stronger message. That’s why we decided to lay on the ground with our hands up.

We hopped on the bus, and we arrived at Kings Academy. We entered the locker room, and we were getting dressed. We didn’t know. Coach Edward huddled us all up, and he brought in Kaepernick. He was just standing there. The fro, you know. I’m not a 49ers fan—I’m a Packers guy—but I’ve always appreciated good football.

He reached out to our coach, and he wanted to come to us and see our game and let us know that he had our back and he had love for us. It’s huge. We don’t get that in Oakland. We don’t get too much love and support outside family. So to have our coaches do more than what they need to do for us, and then have a public figure like Kaepernick come, it was satisfying. It let us know that our message had been sent out clear and that we have someone that can back us up.

Any person with a heart, seeing a whole bunch of black and brown and Tongan, Pacific Islanders, all kids of color, laying on the ground with their hands up trying to protest is a strong message just within itself. If you know the deeper meaning of the protests, it really hits home. So I felt that would be a stronger message to send, with our hands up, because that’s showing the bodies that have been taken away from their families because of police brutality. It brings more of an awareness.

Because this is what you are doing to us. This is what’s happening.