Best of Enemies co-director Robert Gordon confessed to me a while back that his biggest fear was that “people won’t go see this movie because they think it’s going to be boring.” It isn’t. The documentary—which premieres October 3 at 10 p.m. on PBS (Independent Lens)—chronicles the often fiery debates between William F. Buckley Jr. and Gore Vidal that ABC aired during the 1968 election cycle in an effort to boost ratings. “It sounds like a dry documentary because people forget how witty these two guys are,” Gordon told me.

“Quit calling me a crypto-Nazi or I’ll sock you in the goddamn face and you’ll stay plastered.”

Gordon and co-director Morgan Neville—whose Twenty Feet From Stardom won the 2014 Oscar for best documentary—skillfully weave archival footage together with interviews with the likes of Christopher Hitchens, Brooke Gladstone, Dick Cavett, and Buckley’s brother Neil. The movie climaxes during one of the duo’s final debates at the Democratic National Convention in Chicago where, while discussing Vietnam War protesters, Vidal calls Buckley a “crypto-Nazi.” The latter’s response, which could even make Donald Trump blush, was perhaps the first viral sound bite in modern media history. “Now listen, you queer,” Buckley retorted, twitching with anger. “Quit calling me a crypto-Nazi or I’ll sock you in the goddamn face and you’ll stay plastered.”

Indeed, the televised verbal brawls between these two brilliant intellectuals anticipated the culture wars that would define, for decades to come, America’s political struggles—and how the media would cover them. I sat down with Gordon in San Francisco not long ago to chat about the de-evolution of our political discourse and the challenge of making a film about conversations that took place decades ago.

Mother Jones: How did this project come to pass?

Robert Gordon: In 2010, a friend of mine acquired a bootleg DVD of the debates and shared it with me, and I was like, “Oh my God, this is today’s culture wars expressed by these two guys.” As a documentarian, you are always looking for that cache of film you can use to build a movie from; there was 2.5 hours of raw debate. It seemed so relevant to the division in the country that I just thought, “Let’s get on this immediately.”

MJ: Had you worked with Morgan Neville before?

RG: This is our fifth film together. Between the fourth and fifth, he made 20 Feet From Stardom and got the Academy Award. I called him up and said, “Way to go Morgan! You’re really putting the pressure on us now.” But it’s a big help having that accolade. People who don’t know us are more willing to trust us; it’s the stamp of legitimacy.

MJ: Was it challenging to get backers on board with such an unconventional documentary subject?

RG: Yes, it took a while. Most said to us, “This is all very interesting, but why do you see it as relevant today?” And since the movie has been made, the response has been, “I can’t believe how relevant to today this footage is.” 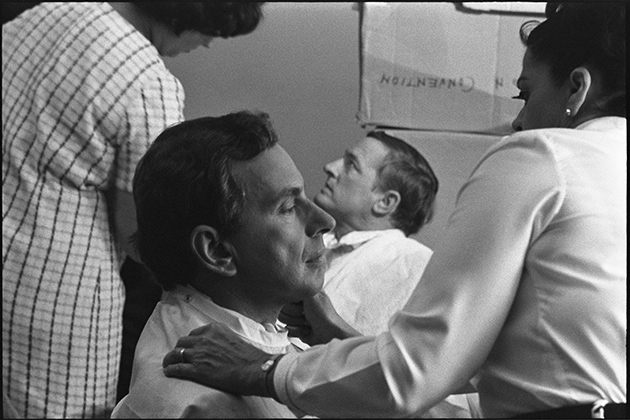 MJ: Most of your past work has involved music. What made you want to stray from that subject?

RG: Most everything I’ve done has been about music, but music as a way to talk about bigger social issues, bigger cultural moments or movements. I don’t see it as that big of a leap. The debates are the operatic vignettes that recur, and it’s quite musical to me. The important thing to me is that [my documentaries] are about changes in America, and so is this.

MJ: It was quite a year, 1968. How did you decide what historical and cultural context to include?

RG: There were cultural touchstones that have been investigated over and over and over, and we didn’t want to redo those. And there are a lot of them to work with. I mean ’68, like you said, it’s rife with material, with cultural disagreement, violence, internationally—it’s all there. But we wanted to focus on our guys and what they stood for and where those changes occurred [in relation to them].

MJ: But you did incorporate some major historical events into the film, like the riots outside of the DNC in Chicago.

RG: Yeah, totally, but only because it was there. It felt like the fighting on the street was being played out by these two guys in front of the glare of the national TV camera.

“I was surprised at the vigor with which Vidal pursued Buckley…Vidal seemed to thrive on animosity.”

MJ: Was there anything that surprised you while researching these two men?

RG: I was surprised at the vigor with which Vidal pursued Buckley and his other enemies. Vidal seemed to thrive on animosity and on feuding, and at the same time could be very charming. You see him on Dick Cavett, and there’s a certain charm to him, you like to watch him, you like to see him talk, and I thought, “Well, surely this ‘man of ice’ was a put-on.” But then you read things like his obituary on Buckley, and, you know, he is a man of ice.

MJ: So did you feel like you had to hold back your own opinions about Vidal and Buckley?

RG: The film wasn’t about our personal views and our personal politics. That would have undermined the film’s potential. One of the interesting things I learned in the course of it was Buckley, whose politics I tend not to agree with, was strong enough to publicly change his mind on the Iraq War. He had come out very for it when it began, and over time, when he learned more about it, he changed. And that’s a brave position for someone in his situation. I think it’s very honorable and admirable.

MJ: There is that moment after the famous blowup between Buckley and Vidal when you pan through all the interviewees in the documentary sitting in shocked silence. And then Dick Cavett goes, “The network nearly shat.” Were those really these people’s reactions?

RG: That’s taking liberty in the editing room, is what it is. It was Cavett’s response that suggests that [those were their real responses], because I asked Cavett about it and you see him turn and think, and he has a long silence, and then he gives that very funny answer, and we thought, “Wow, what if we extend that silence? Because that’s kind of musical in a way.” And we tested it and it was like, “Ohhh, this is funny.” And it never hurts to be funny. 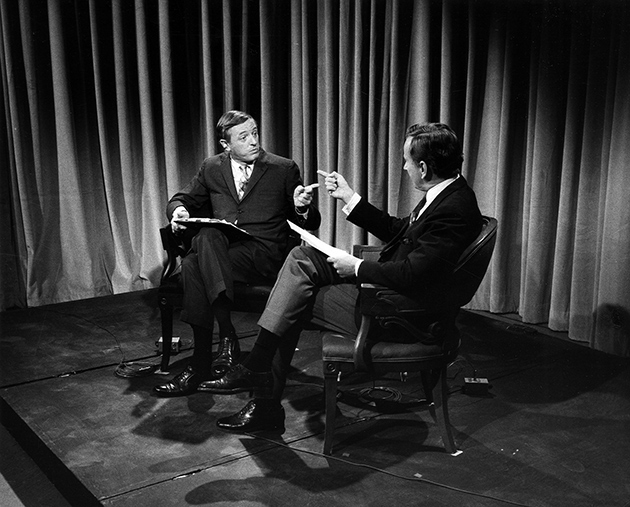 MJ: Yeah, the film has a lot of funny moments; Vidal and Buckley are very entertaining to watch.

RG: These guy were so smart, and they had a command of so many things: history, philosophy, economics, and, people forget, of humor as well. They were smart, witty guys.

MJ: I was struck by how intellectual their rhetoric was. It seems ironic that these debates helped inspire the trashy political debate we now see on cable.

These days, networks “have worked themselves up to the point where all they are is a series of Roman candle explosions.”

RG: Yes, TV is pursued for the lowest common denominator. Networks, which had been civil to a fault up to that point in time, have worked themselves up to the point where all they are is a series of Roman candle explosions. The reason that the audience built for [Buckley and Vidal] is that, in addition to their cattiness, they were offering a lot of ideas and a lot of exchange, and they were humorous, too. It wasn’t just that explosive moment that made this what it was. But TV today seems to want to have you come back from a commercial and go right into a fight turned up to 10, and three minutes later go into a commercial—and that’s success! People have been introducing the show in theaters as “delicious,” and I think that suggests an appetite for more integrity on television; more intellectual exchange, less vacuous shouting.

RG: Yeah, I watched [the Vidal-Buckley debates] with a dictionary the first few times because I wanted to learn the words, and they were saying things I didn’t know, and what did it mean, and why were they choosing those words, and whom were they quoting? Wouldn’t you like to watch a half an hour of political TV and then take your notes and go look up what they were talking about? You glean what you need to glean, and then afterward you can take home more—it’s a prize that comes in the box!