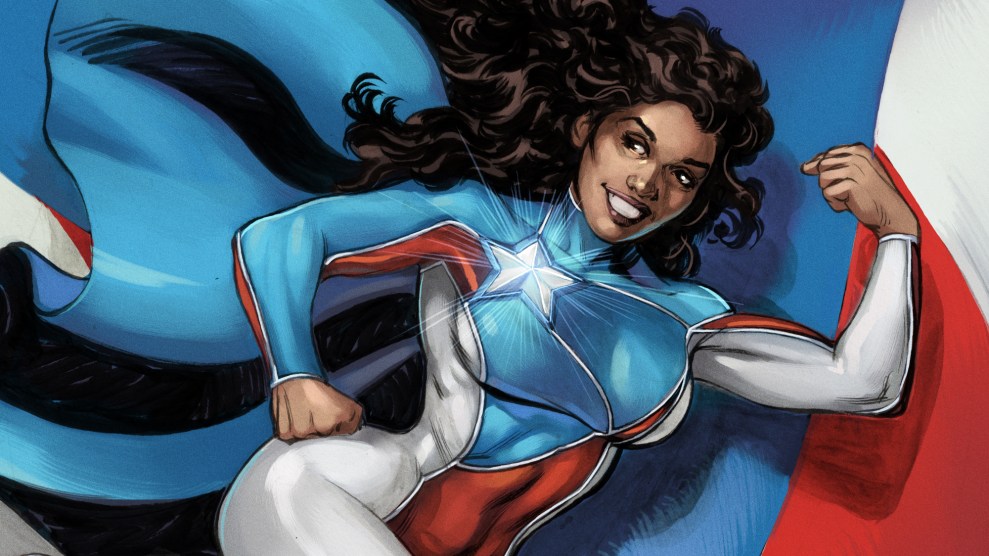 As a kid, Edgardo Miranda-Rodriguez used to walk around his neighborhood collecting cans. Things were tough in the ’80s for a “Puerto Rican nerd” growing up in New York City’s South Bronx—where muggings and arsons were commonplace. “The only thing that was a safe place for me was reading, and comic books,” he says. But the comics were a strain on the wallet for a kid raised by a single mother on public assistance, so Miranda-Rodriguez turned to recycling for extra cash.

His favorite comic book hero was Spider-Man. He gravitated toward Peter Parker’s shyness and awkward traits. In Parker’s brown hair, he saw a representation of himself: “He’s the closest thing to a Puerto Rican I can see in comics,” he recalls thinking.

As a kid, Spider-Man’s Peter Parker was “the closest thing to a Puerto Rican I [could] see” in comics.

Now Miranda-Rodriguez is in a position to do something about that. He writes for Marvel Comics, and his creative services studio, Somos Arte (“We are art”), has collaborated with Marvel on gallery exhibits such as “Marvelous Color,” which showcased African and African American superheroes. He’s also the editor-in-chief of DMC Comics—the imprint started by Run DMC’s Darryl McDaniels—for which Miranda-Rodriguez has produced two critically claimed books, DMC #1 and DMC#2.

But Miranda-Rodriguez’s latest project, an independent bilingual comic called La Borinqueña, is the first time he’s truly combined his art with his roots and his political passions. His new Afro-Latina superhero, named after Puerto Rico’s anthem and clad in the colors of its flag, uses her superhuman strength, flying abilities, and other powers to control the weather, protect people and animals, and safeguard Puerto Rico against supernatural threats—in the first issue she saves sea turtle hatchlings and prevents a plane from crashing on the island. The comic will also weave in storylines reflecting the island’s real challenges—its economic debt crisis, for example, and toxic landfills that have been a longtime problem. Inspired by members of the Young Lords, an organization led by sons and daughters of Puerto Rican immigrants, Miranda-Rodriguez’s stories reflect on the struggles of New York City’s Puerto Rican community as well as the economic and environmental plight their relatives face back home.

Mainland Americans pay scant attention to the island territory, and Miranda-Rodriguez hopes his new series will enlighten some of them. La Borinqueña has already been a source of comfort for Puerto Ricans after Miranda-Rodriguez paid tribute to victims of the deadly rampage at Orlando’s Pulse nightclub, many of whom were Puerto Rican, with an illustration of his heroine—and a source of pride for its creator, who in November was honored by New York City Mayor Bill de Blasio as part of Puerto Rican Heritage month. With La Borinqueña set to hit the stands on December 22, I reached out to Miranda-Rodriguez to discuss his work. 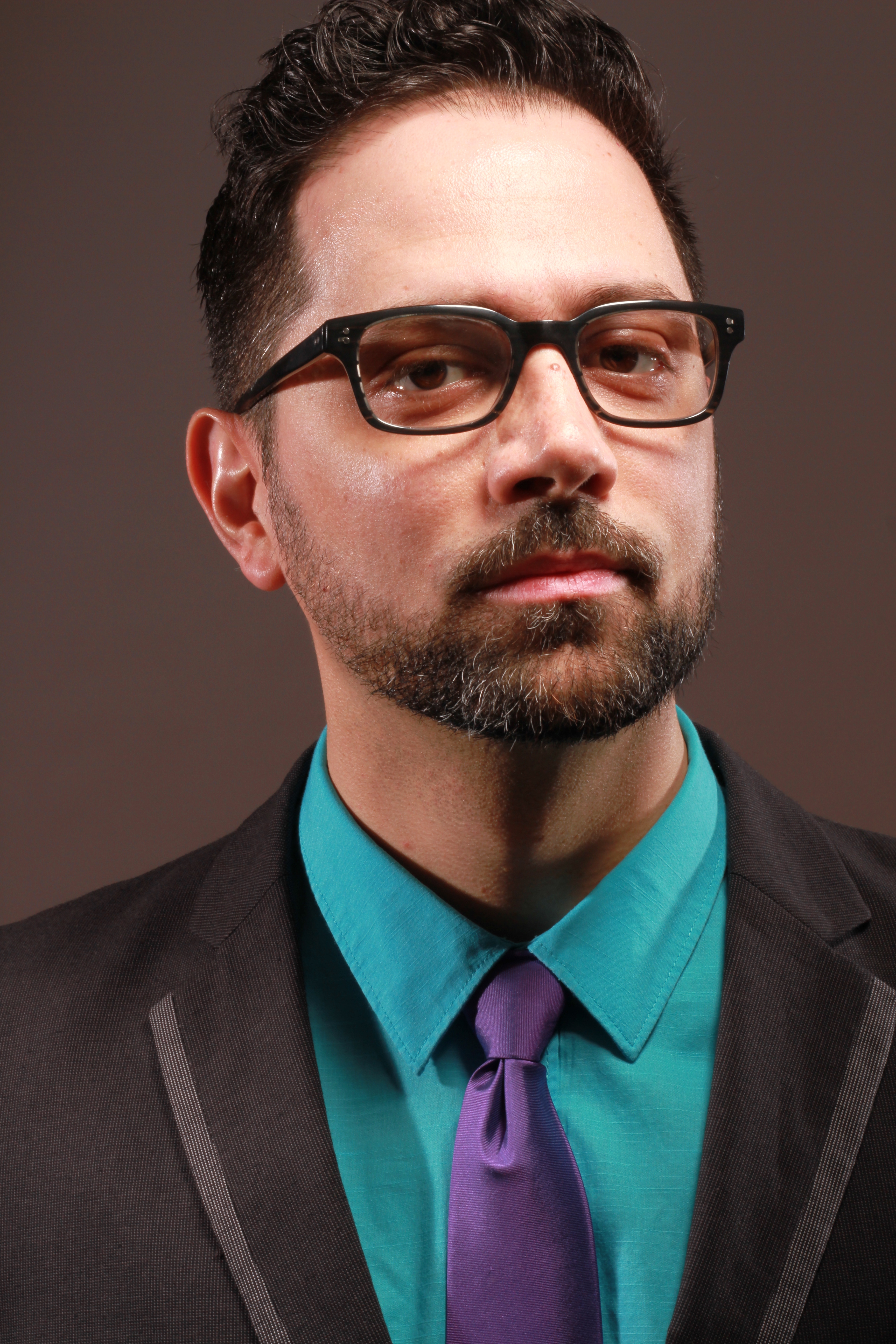 Edgardo Miranda-Rodriguez: Her name is Marisol Rios de la Luz. She’s a senior at Columbia University—an earth and environmental sciences student. As part of her requirements, she has to take one semester abroad so she chooses to go to Puerto Rico to explore five of its caves. The young woman is really engaged with what is going on in the environment so she rides her bike to school every day. She’s also very aware of what is happening in Puerto Rico in terms of the debt crisis and the environment on the island. She meets deities that empower her. That’s how she becomes a superhero.

MJ: How did you get the idea?

EM: When [immigrants or their kids] go home—maybe we’re not originally from the United States—something happens to many of us when we make that trip. We feel, it’s hard to explain, but the only words that come to my mind is some level of empowerment happens. We literally feel better, and I thought to myself, “How cool would it be if she returns home to Puerto Rico and she literally becomes empowered.” I thought that was important, given everything that’s going on. This is an opportunity to show Puerto Ricans that even in this time of turmoil and unrest and uncertainty, they can still find something within that they can draw strength and power from, and that’s what I did for the character. So the character is really—throughout the story, not in a traditional way—going to fight superhuman, supernatural threats, but much more be the catalyst for hope and change on the island. That’s what I am hoping is actually going to happen—even outside of the comic book.

MJ: She’s kind of like the Puerto Rican Captain America.

EM: [Laughs.] Yeah, she is! Honestly, I drew inspiration from Captain America, because he was created in the 1940s as a response to World War II. What do we give Americans to inspire them, to feel like we are gonna overcome this war? Let’s give them a hero. That’s the only time that a hero was blatantly created to raise awareness and to inspire.

MJ: Why not work with Marvel on this?

EM: Anything you do with Marvel is work for hire; it automatically becomes their property. Also, when you create original things for Marvel or for any publishing company, it takes a few years. I thought with what was happening in Puerto Rico, you need to do something now. I couldn’t wait two to three years. I did it independently because I felt the urgency to create something.

MJ: You’re also an exhibit curator. Why do you feel the need to showcase ethnic characters?

“A character like El Diablo wouldn’t be a big deal if there were many other characters who were authentic.”

EM: Because mainstream representation is always white, and unless an individual—myself—makes a concerted effort, it will continue to be always be white. It’s starting to change, but slowly changing doesn’t mean completely changed. I had the opportunity to create “Marvelous Color” as a part of Marvel’s 70th-anniversary celebration. Up until that year, I didn’t really see them do anything that celebrated their diversity, and I thought, “I’ll do it. I’ll do it.” It ended up being not only a show around these superheroes of African descent, but an exhibition around artists that were diverse. [For me,] it has always been: “How do I create a project that is representative and empowering at the same time?”

MJ: And as a kid, you felt this void of not seeing yourself represented?

EM: Most certainly. It was this constant search for validation, for affirmation, for who I was. As I’ve grown older, the imagery of what a Puerto Rican or what a Latino is as determined by Hollywood is still very limited. My own family has black and white people in it. We’re all Latino, Puerto Rican—the rest of the world should recognize that as well. That’s why I wanted to do something different, that was mine. 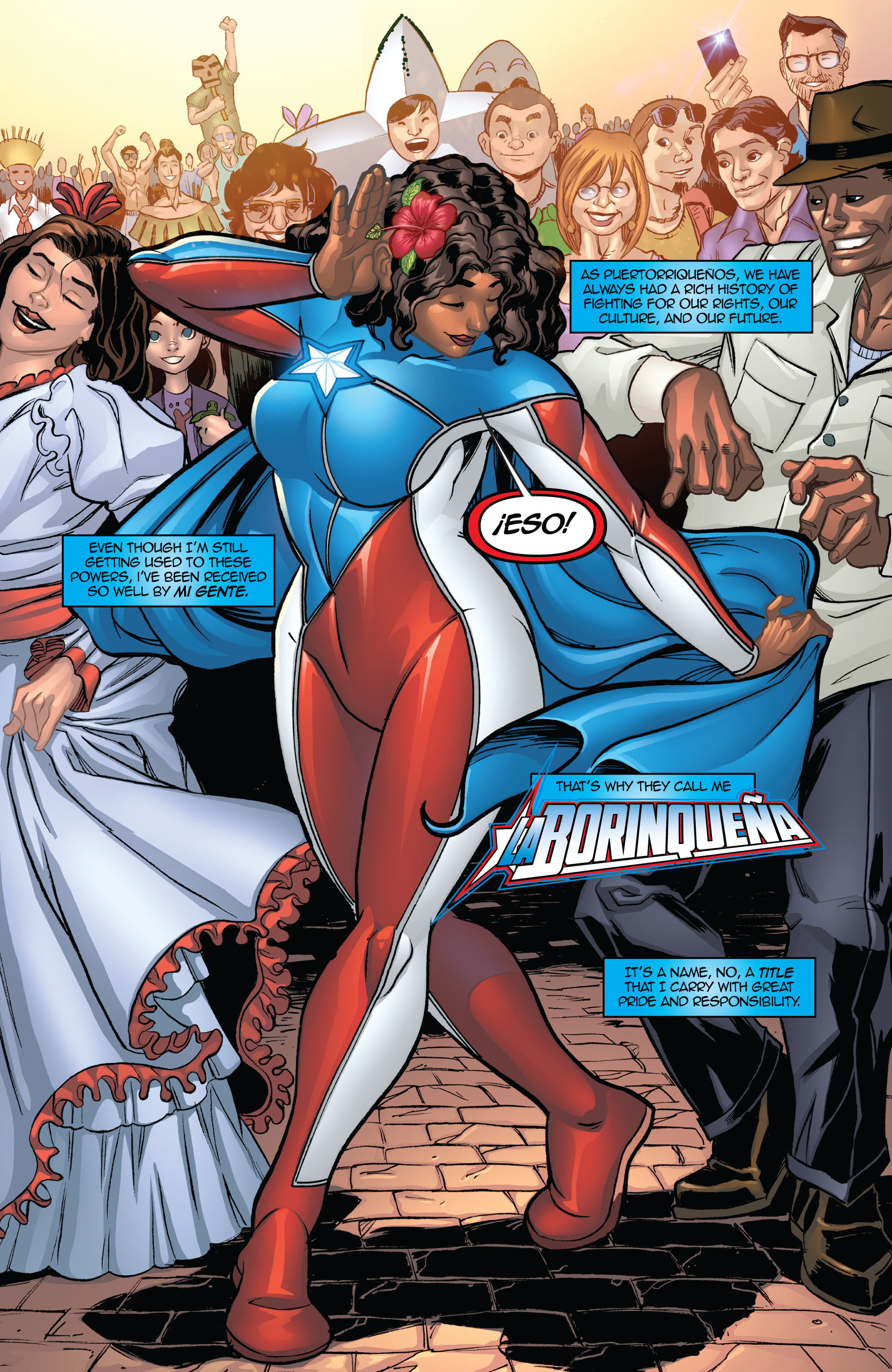 MJ: What do you think about Latino characters with stereotypical representations, like El Diablo in Suicide Squad?

EM: A character like El Diablo wouldn’t be a big deal if there were many other characters who were authentic. Some people will be, like, “Really? That’s the character we’re gonna get?” But nobody makes a big deal about Captain Boomerang in the same film, because we have Superman, we have Batman, we have Captain America—we have so many white male superheroes who offset that one negative white character. It’s about a balance.

MJ: How does La Borinqueña fit into all of this?

EM: I think I took a bold move to create a character, a black Latina character, a woman, and create her to be patriotic. It was in this midst of negative buzz around the island with the debt crisis, with the [Zika] health crisis. [I created] a patriotic hero that tries to offset that.

MJ: Many superheroes flop. What are your hopes and expectations for La Borinqueña?

EM: I would love to get enough support to continue an ongoing series. I would love to be able to have this comic book built into curriculums. I would love for this image to inspire young women and young men to learn more about their heritage, whether they are Puerto Rican or not. I hope I can continue her story, and continue to develop her as a character.

MJ: Did you ever see yourself doing this work growing up? I mean, working with Darryl McDaniels!

EM: In high school, I used to wear Run DMC Adidas apparel. That’s how crazy that is. Never did I think this was going to happen. I thought the most that could happen with my career after curating some art exhibitions with Marvel was perhaps they’d give me the chance to art-direct a comic book. I am eternally grateful for Darryl, because he’s incredibly humble—a beautiful spirit. I love to work with him. One of the coolest moments with Darryl: We were at ComicCon in Kansas City and there was a lull, so there was no one coming to our table, and were blasting some Public Enemy and both rapping along. I think to myself, “Oh my God! I’m rapping along with D-M-freaking-C! This is crazy, you know? 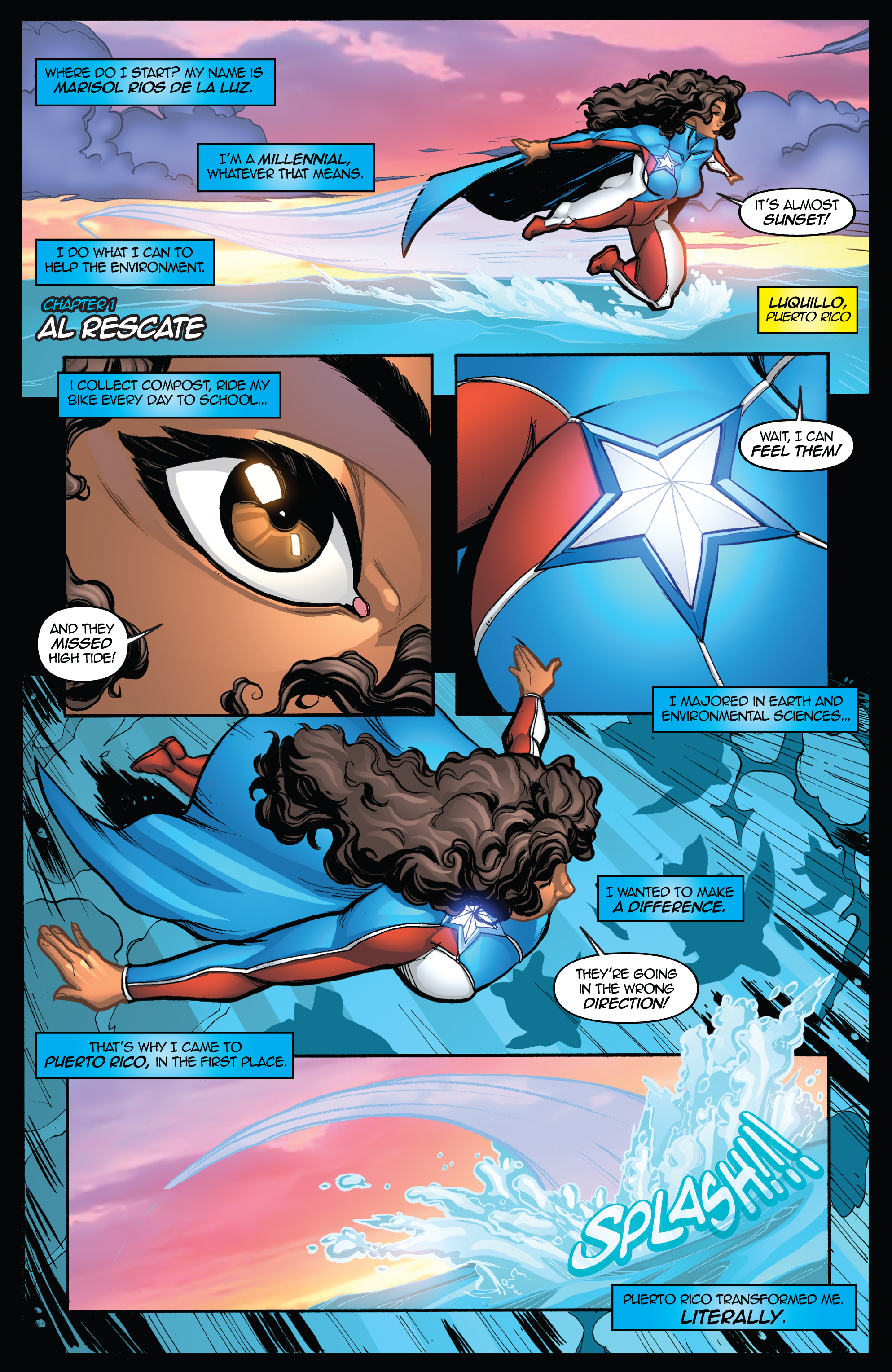