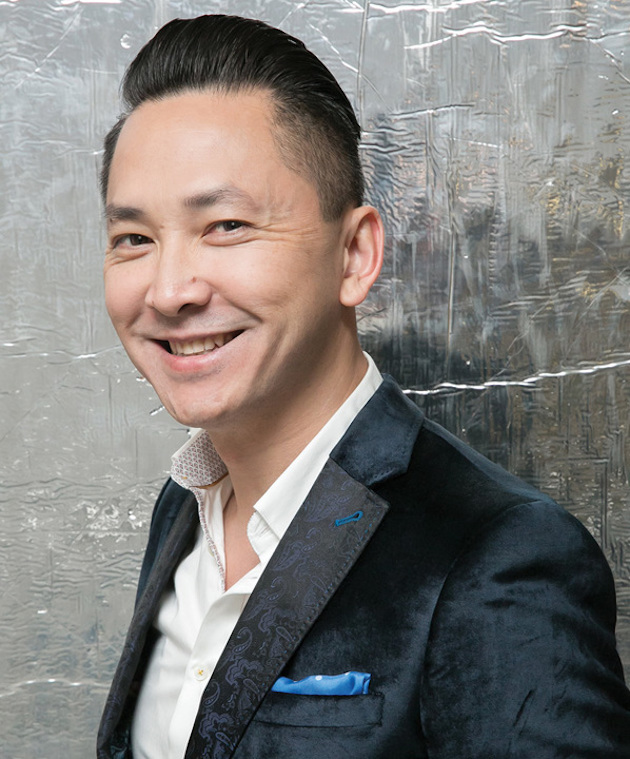 In a national Reuters poll released on January 31, 49 percent of respondents said they favored Donald Trump’s “Muslim ban.” (A subsequent Gallup poll showed 42 percent support.) This interview might shed some light on why.

The author Viet Thanh Nguyen can’t remember a time when he wasn’t a refugee. When he was four, in 1975, his family joined the masses of South Vietnamese fleeing the Viet Cong. His first reliable memories began when his family arrived at a Pennsylvania resettlement camp and was temporarily split up. Nguyen’s American saga, including his lonely childhood quest to understand the horrors his relatives endured, has defined his path as a writer.

His debut novel, The Sympathizer, the darkly comic confessions of a North Vietnamese spy who flees to America, won the 2016 Pulitzer Prize for fiction. His nonfiction follow-up, Nothing Ever Dies: Vietnam and the Memory of War, was a finalist for a 2016 National Book Award. Nguyen’s latest, out February 7, is The Refugees, a collection of short stories that span his 20-year struggle to make himself worthy of the title of “writer.”

Mother Jones: Do you remember anything at all about your life in Vietnam?

MJ: Tell me about your family’s ordeal.

VTN: In March 1975, my mother, myself, and my brother were in our hometown in the central highlands. My father was in Saigon on business when the North Vietnamese began their final invasion. Our town was the first to be captured, and my mother decided to flee with my brother and myself, leaving behind our adopted sister to take care of the family property in the belief that we would come back. We walked several hundred kilometers to the nearest boat town, caught a boat to Saigon—which was probably a horrible experience, from everything I’ve read—and found my father. A month later, the communists arrived there too, and we had a very difficult time getting out of the city, but we finally managed to get on a boat. That took us to, I believe, Guam, and from there we flew to Fort Indiantown Gap, Pennsylvania.

MJ: That’s where your memories begin?

“In the United States, we want to believe we will never become a country of refugees.”

VTN: The first memories I can rely on. To leave the refugee camp, I had to have a sponsor, and no sponsor would take my family of four. My parents went to one sponsor, my brother to another—he was 10. I was sent to another family altogether. I was very confused and upset, and so my first memories are of that.

MJ: But the family was reunited?

MJ: And you later moved to California.

VTN: We were in Harrisburg from 1975 to 1978. My parents had very limited job opportunities, and the weather was bad, and Harrisburg was not a great town in retrospect. So when a friend told them there were better opportunities in San Jose, they picked up and left and opened probably the second Vietnamese store in San Jose.

MJ: Tell me about that phase of your life.

VTN: The downtown area where I grew up looks very nice as a result of the tech boom, but in the 1970s and 1980s it was working class. My parents were living a stereo­typical immigrant—I should say refugee—shopkeeper lifestyle. It was a difficult existence; they were shot at their store at one point. For me, it was quite lonely. They were working all the time and my older brother went to college, so I was turned into an only child at 10 or 11. I found tremendous refuge in the library.

MJ: What would you read?

VTN: Everything. By the sixth grade I was reading All Quiet on the Western Front, for example. Boundaries didn’t really exist for me. I was also reading fantasy and science fiction, absorbing all this information. The books offered another world to escape into. I read a lot about the Vietnam War. That began my fascination with what had happened to my family.

MJ: Did you discuss it with your parents?

VTN: Their account, mostly, was, “Just be glad you’re not in Vietnam, because all these terrible things are happening there.” I was perplexed by the things they wouldn’t talk about. For example, all the family had of [my adopted sister] was one photograph—a huge absence, but it was very difficult to talk to my parents about that. My Vietnamese was not great. There were a lot of things I couldn’t even ask.

MJ: I notice that you take pains to distinguish between “immigrants” and “refugees.”

VTN: Immigrants, as troubling as they are to some people, are an integral part of what the American Dream is supposed to be. They’re understandable to a considerable number of Americans. Refugees are different. In the United States, we want to believe we will never become a country of refugees. But the arrival of the refugee hints that that may not be the case. Refugees have been displaced by war or natural disaster or political catastrophes, and they are much more threatening because they are reminders to people that all the comforts that we take for granted can be taken away in just a moment.

When Hurricane Katrina happened and all these Americans were displaced and homeless, some of the media called them refugees. Both President George Bush and Jesse Jackson agreed, for perhaps the first and only time in their lives, that these people were not refugees because they were American. Or in the case of Jackson, that it was racist to call black people, African Americans, refugees. As a refugee myself, and an American who is a person of color, I found those responses absurd—but also very telling of exactly why it is Americans fear refugees.

MJ: When did you first go back to visit Vietnam?

If you’re a so-called minority writer, the temptation is to write for the majority…I refuse to do that.

VTN: I think 2003. I went back five or six times. It’s been rewarding, but also difficult because I am Vietnamese and I’m also not Vietnamese. In the North, I’m often mistaken for Korean. When people discover I’m Vietnamese, they’re very excited: “Welcome back to the homeland!” In other situations, people will charge you a foreigner price. [Relatives] are very happy to see you, but there’s tension around the fact that you left in the first place, and you must be a rich American. Oftentimes, your relatives are not well off. Those resentments and expectations are emotionally complicated. I had this psychic connection and traumatic connection to Vietnam, and I wanted to make sense out of that. But I know a lot of Vietnamese Americans my age or younger who have no desire to deal with that past.

MJ: I understand you were traumatized as a child by the movie Apocalypse Now.

VTN: Apocalypse Now left a deep mark on me. My relationship to it over the years has been ambivalent. I respect it as a work of art, and in some ways The Sympathizer is a response to that, but it embodies a very typical Hollywood way of looking at people who are not white, not American. People are reduced to being extras or sidekicks, at best, for narratives that center on white people, especially men. For the Vietnamese in particular, that meant they were there to be killed or rescued—or to have sex with. And that is deeply problematic if you happen to be Vietnamese. Hollywood in many ways serves as the unofficial ministry of propaganda for the United States. It was important to take time in the novel to criticize Hollywood and its fantasies, because they are a part of the war machine.

MJ: You’ve said that when you wrote The Sympathizer, you made the decision not to pander to a white American audience.

VTN: If you’re a so-called minority writer, the temptation is to write for the majority. That’s the easiest route to get published, and that distorts the stories. Writers from the majority can assume their audiences know what they’re talking about—they don’t have to explain things, whereas minority writers are expected to. I refuse to do that. So I wrote a book that’s a confession from one Vietnamese person to another. If you’re not Vietnamese, you’re not the primary audience. That can be disorienting, but I wanted to force readers to question their privileges and assumptions.

MJ: Has there been interest in a movie version of The Sympathizer?

VTN: In my mind, the best outcome would be if the Coppolas buy it and then totally screw me but also pay me a lot of money. It would make a great story! The reality is, we’re negotiating an option offer for TV. A movie would be difficult because you’d have to throw out half the book.

MJ: Your new story collection kicks off with “Black-Eyed Women,” in which a ghostwriter is visited by the ghost of her brother. Why did you lead with that one?

“By college, I had a really grand, preposterous vision of myself as becoming a writer.”

VTN: It’s one of the better stories. It also foregrounds a couple of big themes: One is the idea of haunting. It’s literally a ghost story, but people who have had traumatic histories are haunted by that history, and the ghosts come to symbolize that. It was horrifying to write. That story actually took 17 years and something like 50 drafts!

MJ: What made it so torturous?

VTN: I was a writer who always wanted to say more, and I’d been trying to shovel myself into the confines of short stories. “Black-Eyed Women” typified my struggles.

MJ: Your stories touch on how hard it is for refugees to feel like they belong. Is that something that affects you, even after all these years?

VTN: I feel that sense of in-betweeness and that sense of dislocation on a regular basis. It’s not a tragedy or anything. I think many of us feel that way about our situations, except I connect that to the feeling of dislocation as a refugee. I’ve never stopped being a refugee. The one time I think I actually felt completely present, that I fully belonged, was in the writing of The Sympathizer, which took two years and I had nothing else to do with my life for those two years—90 to 95 percent of that experience was really wonderful. I felt like finally my writing and myself had merged.

MJ: When did you realize you wanted to write for a living?

VTN: I think I always knew. By college, I had a really grand, preposterous vision of myself as becoming a writer, but I don’t think I had the discipline or the patience—or the ability or the humility. It took 20 years to acquire those things. Before writing The Sympathizer, I never called myself a writer because it seemed so pretentious—a writer was what somebody else called you, a title bestowed. But when I finished the book, I felt I had paid my dues.

MJ: In the acknowledgments for The Refugees, you point out that your son is almost the age you were when you became a refugee. Why did you make note of that?

VTN: Watching him these first three years—he’s wonderful and he’s innocent and all these things—I wonder if I was that way when I was a child. It’s given me greater empathy for myself. No one wants for their child to become a refugee. It’s an awful experience, and so I hope his world is different than mine—that he doesn’t undergo the kinds of experiences that would make him into a writer.