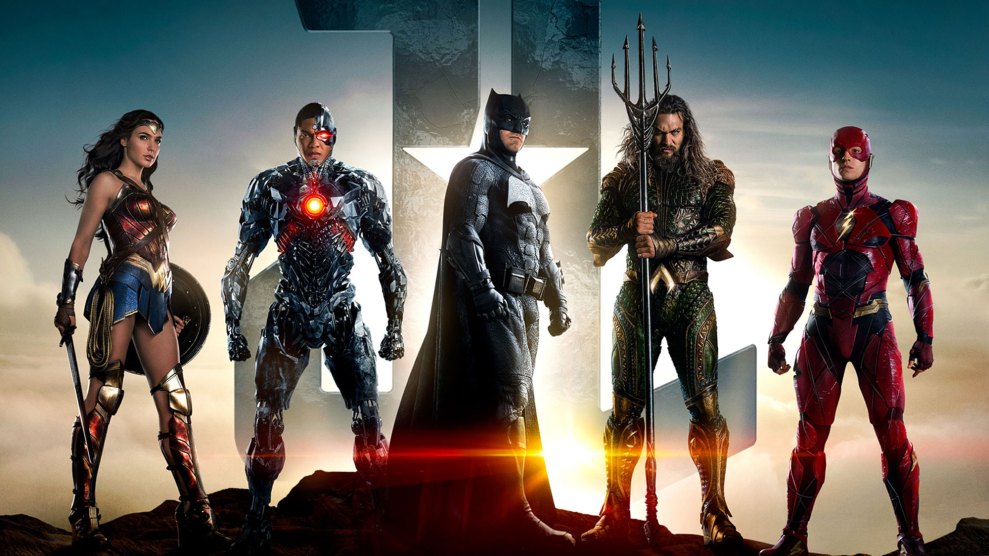 Once upon a time, in the long long ago, this bad guy from a lava planet comes to Earth with these three magic boxes and tries to turn our pretty blue marble into a red marble, but is defeated by some people who live in the sea (Atlanteans), some warrior women who live on an island (Amazons), and “the tribes of man” (you, me and the bourgeoisie). The bad man escapes and loses these three precious boxes he really adores. One goes under the sea, one goes to the island, and then the humans bury one in some ditch in a forest.

Are you still with me? This review is about Justice League. You haven’t clicked on the wrong link.

This is—chronologically speaking—the beginning of the legend behind Justice League, but not the actual beginning of Justice League, Warner Brothers’ latest weird entry in the DC Extended Universe. The actual beginning is a roof. There’s this guy on it playing with pigeons and then Ben Affleck comes and dangles him off the side of the roof. “Why, Batman? What have I done? Is it a crime to have pigeons,” the man does not ask. He does however ask the Dark Knight what he wants from him. “Fear,” Batman responds. “I can smell it,” Batman lies. Then suddenly some flying insect man appears and he and Batman fight. This insect man can actually smell fear. Batman kills the insect somehow (it has something possibly to do with sound?) then Batman and Mr. Pidgeon talk about how everything on Earth is bad now that Superman is dead.

Oh yeah, Superman is dead in this movie. He died in Batman v Superman. You could be forgiven for blocking that whole thing out.

Back to Justice League: that insect on the roof wasn’t just some run-of-the-mill insect. It was a “scout.” “Like an army scout?” “Sure, yeah, don’t ask me how I know that but I know that.” That’s why he dangled him off the roof. As bait. There is an alien invasion coming and Batman needs to build a team to fight them.

Batman sure does know a lot of things he couldn’t possibly know! This is repeatedly explained by throw-away references to “Luthor’s files.” The last time we saw Lex Luthor he was in prison and Batman was not very nice to him. So I guess he can’t just ask Luthor to explain his files and has to rely on his superpower: reading.

These files though, boy, do they have a lot of helpful stuff in them. There are turn-by-turn directions leading Batman to find magical people hiding among us. One of them is this guy named Aquaman who lives in the sea but sometimes comes out of the sea to deliver fish to his village. Ben Affleck goes to the village and asks the villagers if they know of any magical men who live in the sea. The village leader tells him to get out of town! But Ben Affleck says, “it you.” And it is! Ben Affleck explains to Aquaman that an invasion is coming, but Aquaman is all, “I don’t care” and swims away.

Meanwhile, in Britain, there is a bank robbery/right wing terrorist attack foiled by Wonder Woman. She’s doing her thing, being a superhero.

Anyway, then the bad man I mentioned at the top comes back and goes to Wonder Woman’s home island and steals his box back. Run-roh. Wonder Woman’s mom shoots a fire arrow over into Greece (I think, but definitely some Aegean-type place with columns), and when Wonder Woman sees it on the news she whispers, “invasion.” This is the third time the audience has been told there is an invasion coming. It will not be the last.

Then the bad man goes under the sea and gets that box, too. Aquaman and Amber Heard (queen of the sea?) fight him but lose the box. Amber Heard tells Aquaman that though he is half-man/half-seaman (or “Sea Blade” as no one calls him) he must go fight off the invasion.

Then Wonder Woman comes to Ben Affleck’s house and Ben says “there is an invasion coming.” And Wonder Woman says, “not coming. It’s here.” She seems a bit annoyed to be hearing about this invasion she already knows about. This is the most relatable moment in Justice League.

There is also this guy who is half-man/half-machine (“Robot Blade”). He was in this accident offscreen in the past and almost died but his father, the scientist from Terminator 2 Judgment Day not learning his lesson, uses a “change machine” to save his son’s life by making him half robot.

There is also the Flash, but not the Flash from the TV show. This Flash is Kevin from We Need To Talk About Kevin.

So like I was saying, the invasion is happening. The bad man from the lava planet (Steppenwolf, he is inexplicably named) needs to find this third box, the one the humans left in a ditch. With all three boxes he can turn the Earth into a lava planet. (Side note: The boxes may be alive. They may even be Steppenwolf’s mother. He calls the boxes “mother.”) He starts kidnapping random humans and asking them if they have the box. This does not seem like a very effective way of finding the box, but then like the third one he kidnaps turns out to be Robot Blade’s dad and he immediately blurts “I’ll never tell!” “So you do know!” “Whoops!” The change machine he used to turn his son into a robot is actually the third box. “It was found during World War 1,” he says with eyebrow-raising specificity.

Basically this whole movie from here on out is about the guy trying to get the box. There are other people in the movie too! Lois Lane is around. She’s sad that Superman is dead. So sad in fact that she just can’t be a super good journalist any more and is lazily reviewing tent pole movies after they’ve already come out because she couldn’t get invited to a screening, or something. She’s half-investigative reporter/half-senior editor for growth and engagement (or “Journalist Blade”).

Everyone is sad about Superman being dead. In fact, the reason Steppenwolf has invaded is because the boxes called to him and said, “humans are so sad about Superman being dead that they are too divided to defend themselves.” It’s true that the humans are more divided in 2017 than they were in 10,000 B.C., but in 10,000 B.C. they lived in fields and didn’t have nuclear weapons or the Air Force, so his chances probably aren’t that improved.

Diane Lane’s Martha is alive, but she lost the farm. Martha goes to see Lois and tells her that she wants her to get up off the mat and live her life. “That’s what a mother-in-law is supposed to say…Oh I know I’m not actually your mother-in-law since you and Clark never got married, but I’m half your mother-in-law. Sort of like Mother-in-law Blade.”

Does it feel like this is taking forever? That is because the first half of this movie takes forever.

They’re trying to pack in so much that the first hour or so is mostly people repeating exposition over and over. That’s not to say nothing happens! There are fights! Things do happen. But none of it happens because of the happenings on the screen; it happens because of something off-screen that someone else quickly explains in dialogue.

This really isn’t a very good movie. In fact, it’s a bad movie. But! It is far better than Batman Vs. Superman. (Don’t even get me started on Suicide Squad.) It’s weird because, again, this is a bad movie, but it does have moments of fun and entertainment. Wonder Woman doesn’t disappoint. Aquaman, whose powers appear to be saving wrecked sailors and controlling water up to a point—do not ask him to control too much water—is ridiculous but engaging. We Need To Talk About Kevin is pretty good as the Flash. Cyborg man doesn’t have much to do but he does it well. All the actors are basically fine. There are no cringeworthy performances. (Thankfully, Jesse Eisenberg’s Lex Luthor doesn’t escape from his prison.)

Joss Whedon took over JL midway through after Zack Snyder departed for family reasons. This is, I think, key to understanding this weird movie. It is half a very terrible movie/half-a-sort-of-if-you-squint-it’s-okay movie. If Batman v. Superman killed all hopes for the DC Cinematic Universe, Suicide Squad buried them. But Wonder Woman dug that grave up and revived them. JL is much closer to BvS than WW but it wants to learn from WW. It’s trying. That ain’t nothing!

All the flaws are structural flaws. The villain is some random villain who’s motivations are unclear. Batman doesn’t have much to do other than spend money and make Whedon-esque references to how he has nothing to do other than spend money. Superman is dead for much of the film and then when he’s back he’s so Super that the rest of the team are all basically unnecessary. Etc…

These are problems that couldn’t realistically be fixed with a quick polish of the script. But there is hope is the attempt! You couldn’t save this movie half way through but the next one need not have such terrible structural elements.

What is that worth, though? Not enough to make this a good film on its own, that’s for sure. But consider the franchise. Let’s rank the DCEU movies prior to JL.

Wonder Woman is obviously the best. It’s not perfect but it was a very well made and enjoyable superhero film. A solid A-. It breathed life into the franchise.

Man of Steel is a considerable bit worse. It is a very flawed movie, but it isn’t the worst thing on Earth. C+.

Suicide Squad: You know how when you take the SAT you get 400 points just for filling the scoring card out correctly? Suicide Squad would not have gotten those points. 0.

So where does Justice League rank?

Justice League gets a C. It is the third best DCEU movie and the 3rd worst DCEU movie. It is half-BvS/half WW; it is half-dead/half-undead. It is “DCEU Blade”.

I will probably never see this movie again because it’s bad but it does give me hope that maybe the next Justice League will not be bad.