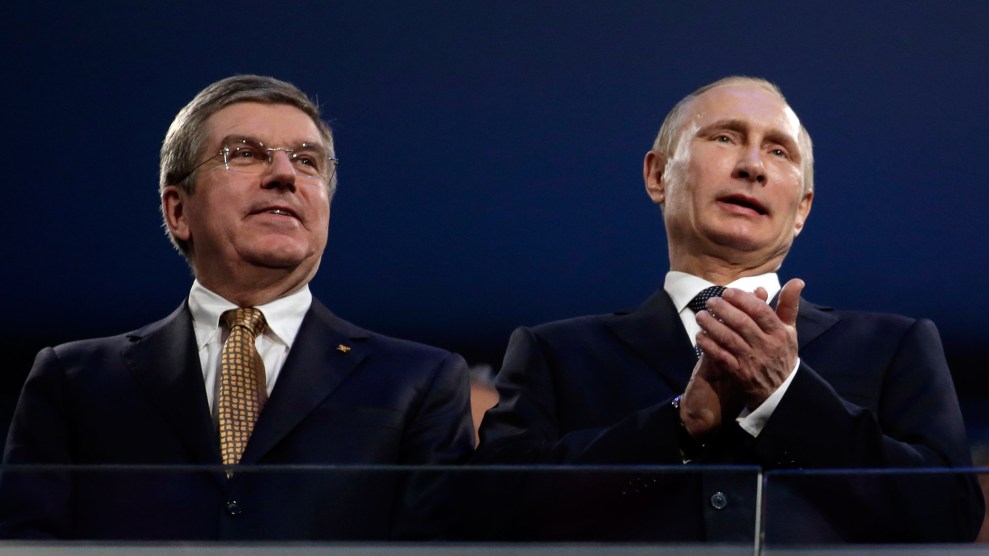 On Tuesday, the International Olympic Committee announced it would bar Russia from participating in the 2018 Winter Games in Pyeongchang, South Korea, which are set to take place in just a few months. The historic punishment comes after a damning report by an IOC disciplinary commission that concluded Russia engaged in the “systemic manipulation of the anti-doping rules and system.” Russia is the first country to be banned from competing for doping.

The IOC president Thomas Bach said in a statement Tuesday that Russia’s doping program was “an unprecedented attack on the integrity of the Olympic Games and sport.”

The IOC did leave open the option for individual athletes who can prove that they haven’t cheated by using drugs to compete in the Olympics under the banner of “Olympic Athlete from Russia.” These athletes would receive invitations from a panel made up representatives from the IOC, the World Anti-Doping Agency, and other organiozations, and could make it to the games if they were not previously disqualified for a doping violation and have undergone drug testing recommended by the panel to “ensure a level playing field.”

An independent report conducted on behalf of the World Anti-Doping Agency found in December 2016 that since 2011, more than 1,000 Russian athletes across more than 30 summer and winter sports had been involved in or benefited from a state-sanctioned doping program. This report and other investigations from the World Anti-Doping Agency have informed the IOC’s case against Russia; the key testimony comes from Grigory Rodchenkov, the doctor who oversaw Russia’s anti-doping lab but was in fact an integral player in its doping operations. Rodchenkov told the New York Times in May 2016 that he had developed a cocktail of banned substances and liquor to give to Russian athletes and that during the Sochi Winter Olympics in 2014, he ran an overnight operation with Russian intelligence officials to replace dirty urine samples with clean ones collected long before the Games. That year, Russia led all other nations with 33 medals, including 13 golds. Now, dozens of Russian athletes have been retroactively disqualified from the Sochi Games, and a special ceremony will take place during the 2018 games to reassign medals.

Rodchenkov, who is currently under federal protection in an undisclosed location in the United States, recently gave the Times diaries that chronicle his work as anti-doping director from 2014 and 2015 and informed the extent of the Russian government’s involvement in the cheating. A compelling figure in his own right, he also became the subject of the documentary, Icarus, in which the chemist discloses how the doping program worked as he flees from Russia for the United States. When I spoke to Icarus’s filmmaker Bryan Fogel earlier this year, he criticized the IOC’s past response to Rodchenkov’s revelations, saying:

In my mind, in the middle of July, the IOC had no choice but to ban Russia from the Rio Games. And then you see them pass the buck and go against every single Olympic ideal and value that they had ever put forward as an organization and that they sell to clean athletes around the world. What we’re seeing is an era where governments and huge organizations such as the IOC don’t have accountability. They don’t have accountability to the athletes they are supposed to be protecting and they don’t have accountability to the truth. What we’ve seen out of Russia is a continual denial, no matter what has been presented. They are still blaming [Rodchenkov] as an individual who did this all on his own.

Now, it appears the IOC is finally listening.