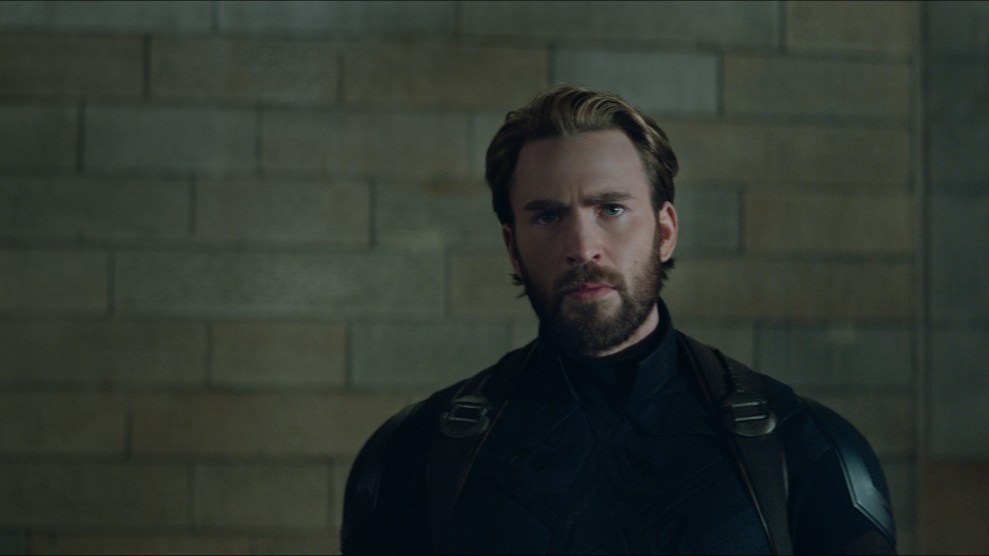 Every few weeks, Mark would come and visit me. This was six years ago. I was working as a program manager at an outpatient psychiatric clinic in Manhattan’s East Village.

His parents both worked at the clinic and brought him in often. Mark would swagger by my office and challenge me to a competition, which I always accepted. The game was to shoot crumpled balls of paper into a series of wastebaskets and containers—office basketball.

Mark was eight years old and black. I was 26 and white. He’d pretend to be Steph Curry and I’d be John Starks. He was about 3-and-a-half feet tall—and clutch. Whenever he needed to hit a Tupperware shot—three points, as opposed to the 1-point wastebasket—he’d drain it.

Mark patted and pulled on his own hair as he said it: I looked “like Captain America.”

One day, Mark told me he thought my hair was “really cool.” I’ve got a pretty basic white guy haircut, short on the sides, longer on top, parted on one side. By any reasonable measure, his hair was way better than mine. He was always rocking a fresh little high-top fade. He was a sharp dresser too, and a tornado of charisma—a pint-size comedian perpetually brimming with confidence. This child was infinitely cooler than I was or probably ever will be.

The first time he commented on my hair, I didn’t think much about it. I tossed the same compliment back his way and we continued lobbing our paper balls. A few weeks later, he said it again: Only this time, he added that he wished his hair looked like mine. He patted and pulled down on his hair as he said it. He said I looked “like Captain America.”

Seeing him tug on his hair to make it more “heroic” broke my heart—and woke me up.

It took a little kid to make me think about the fact that nearly all of the heroes he and I had encountered in our lives—in books and movies and TV shows—were white guys about my height with similar hair. They almost never looked like Mark. The archetypal superhero is a tall, broad, straight, light-skinned male with some iteration of Captain America hair. For evidence, check out the top-billed cast of The Avengers: Infinity War—which is considered an improvement over most superhero films in terms of the diversity of its actors.

America’s history of bias against natural black hair—including school and workplace bans on dreadlocks, cornrows, twists, and afros—is well documented. A 2016 study by the Perception Institute found that black women perceive a “social stigma against textured hair” that is “substantiated by white women’s devaluation of natural hair styles.” The study also found that black women are more anxious about their hair than white women, and they feel social pressure to straighten their hair to fit in at work. This is aggressive ethnocentrism—white hair being professional and acceptable, while black hair is not—and I’m ashamed to admit that after more than two decades of life, I was ignorant to its existence.

I thought I was woke. I thought I understood de facto and institutional racism and all of its wandering tendrils, but I had somehow overlooked this entire aspect of our culture that, like most other things, was crafted almost exclusively by and for people who look like me. Until Mark’s innocent comments clued me in, I never realized how this constant affirmation had bolstered my own self-worth even as it damaged the self-worth of others.

None of this, of course, was ever news to people of color. In the 1970s, some four decades before #OscarsSoWhite, James Baldwin wrote, “Heroes, as far as I could see, were white—and not merely because of the movies, but because of the land in which I lived, of which movies were simply a reflection.” An essay published by Stanford University in 1999 describes the brazen bias of the entertainment industry as an adherence to an archaic philosophy that ideas must appeal to the “‘majority’ at the expense of the insignificant minority.” More recently, Gene Luen Yang, author of the best-selling graphic novel American Born Chinese, recalled how when he was a kid and a Chinese person would show up on an American TV show, “it was like an event, something that we would call our parents over to look at.”

As part of the carefree majority, I was blissfully ignorant. Children of color don’t have that option. As Baldwin pointed out, popular entertainment is yet another reflection of our racial inequality. It’s not an aberration, it’s a continuation—a reminder.

Last year, Johnson & Wales University published a study on the impact of black erasure and whitewashing in popular media. It concluded that the continued entrenchment of white as the “default race” in entertainment and the common practice of casting people of color as “thugs” and criminals, “negatively impacts children in the Black community and aids in the robbery of their childhood.” The report continues:

Without regularly seeing positive reflections of themselves on the media it becomes hard for some Black children to value their self-image. It is so uncomplicated to begin to feel unattractive and undesirable when there are so many books and shows that fail to include Black well-rounded and interesting characters.

In a series of 1940s studies that became known as the “doll tests,” psychologists Kenneth and Mamie Clark showed that black children preferred lighter-colored dolls and assigned them more positive attributes than they gave to dolls of darker hues. The Clarks concluded that discrimination, segregation, and race-based stereotypes led to black children feeling inferior to their lighter-skinned peers, and having lower self-esteem and self-worth.

“I had what was called an afro—black-people hair,” says Adam Ortiz. “I thought only white people were regular people. I was just a side character.”

When I bring up the doll tests to Adam Ortiz, a peer counselor and empathy workshop creator in New York City, he goes straight to his own childhood: “As a Puerto Rican boy, I remember that when my friends and I (all exclusively people of color) chose action figures to play with, it was always white ones. When we chose video game characters to use to battle each other, we chose the white ones. The brown ones were just side characters,” he says in an email. “I remember thinking that white children’s hair grew down, and moved in the wind, or covered their eyes, much like the white hero figures I wanted to be like, and I envied them for it. I was mortified that, although I had pale skin and could nearly pass as white, I would never. I had what was called an afro—black-people hair. My hair grew up, up, and away. It filled me with shame…I thought only white people were regular people. I was just a side character.”

For white kids, he adds, superhero films are “simply an exciting, mythical variation of how the adventure of their life may play out. The characteristics of their culture and appearance are romanticized.”

When I ask why he thinks it took me so long to notice this obvious reality, he writes back, “No one takes particular notice of how strange it is that our sky is blue, of all colors. That our grass is green. That the sun is yellow. That our heroes are white. It is just the way it is.”

That day with Mark was perhaps the first time I’d really thought about this stuff—because I didn’t have to. It was a chasmic blind spot. It’s not as though I was sheltered—I grew up an hour from New York City and was obsessed with hip-hop culture. I worshipped Nas and Talib Kweli and Common and Big L and Rakim and Pharoahe Monch; my mom died when I was 13, and I found solace in their words of struggle and triumph. I even have some black family members, and yet my default setting included this unfortunate variety of colorblindness.

If I wanted to pretend I was Superman, powering around the Earth to reverse time, it wasn’t a big stretch.

The psychological concept of inattentional blindness was introduced in the late ’90s by psychologists Arien Mack of the New School for Social Research and Irvin Rock at the University of California-Berkeley. In one of their studies, participants were asked to examine a series of crosses on a computer screen and say which arm of the cross was longer. After a number of trials, bright shapes begin to accompany the crosses within the participants’ field of vision, yet many of the subjects failed to notice these images at all.

That was me: so fixated on the crosses that I completely missed the colorful shapes.

If I wanted to pretend I was Superman, powering around the Earth to reverse time, or dream of saving the planet, it wasn’t a big stretch, because a guy who looked kind of like me—or my dad, or my uncle—was doing it. Mark, too, yearned to look like Spiderman and Iron Man and Captain America, Green Lantern and the Flash, Thor and Daredevil and Batman and Robin—and, yes, Superman. But in the real world, his desire translated to wanting to look like me: a “normal” superhero-type person.

This is why Black Panther was such a huge deal for so many people, and why Hollywood needs to keep hiring more writers and directors and editors and cinematographers and agents and consultants of color who can help reshape what superheroes look like—as Yang did when DC Comics hired him to write Superman books and he came up with an Asian Man of Steel. Because despite all of the discussion around this topic over the past few years, white America still doesn’t get it.

It’s time we put Captain America hair behind us.