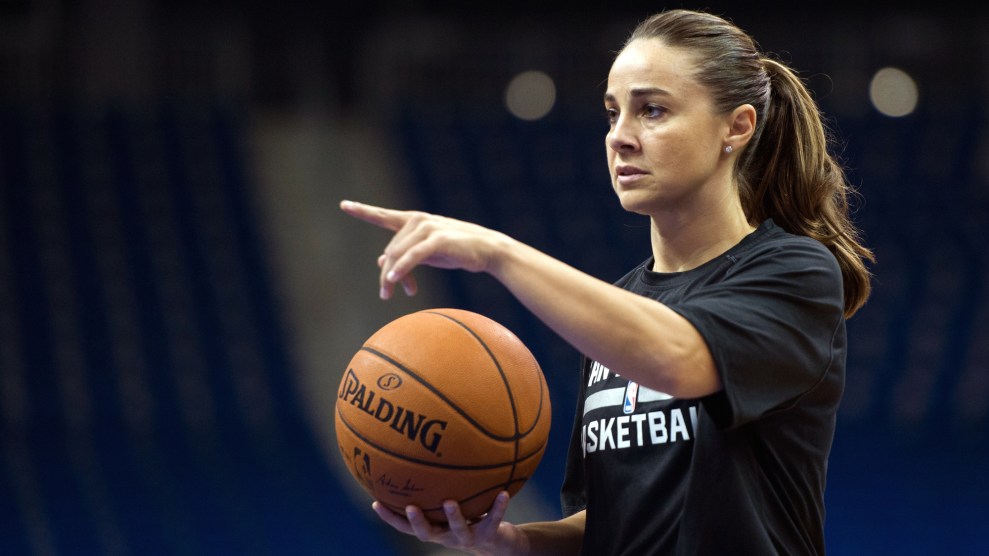 The National Basketball Association just got one step closer to breaking down a big gender barrier.

There has never been a woman head coach in men’s professional basketball. But ESPN reports that the Milwaukee Bucks are interviewing Becky Hammon for their top coaching job, making her the first woman to be interviewed for an NBA head coach position.

Hammon is already the first woman to serve as an assistant coach in the NBA. She became an assistant coach for the San Antonio Spurs when she retired from her 14-year playing career in 2014. In 2015, she proved critics of the Spurs’ hiring move wrong when she led the team’s summer league to a championship.

A New Yorker profile last month catalogued the barriers and sexism Hammon faces on the sidelines—especially from talk show radio and social media. A reporter asked Hammon at her first press conference about “an anonymous e-mail that called [her hiring] a publicity stunt, and suggested that the only thing the players had to learn from her was advice on baking cookies.” Hammon responded, “At the end of the day, you have to say, ‘So what’s the truth in that? Is that true? No, it’s not.’ So I have no comment to that—other than, I make good chocolate-chip cookies. That’s a fact.”

The NBA has seen plenty of instances of sexism and alleged sexual violence that hint at how far it still has to go, as The New Yorker documented:

In October, 2016, the former Chicago Bulls point guard Derrick Rose, now with the Minnesota Timberwolves, was tried and cleared in a rape case. Rose testified that, at a 2008 N.B.A. rookie-orientation program, he was told not to leave behind used condoms, reportedly saying, “You never know what women are up to nowadays.” (A spokesperson for the N.B.A. said that players were instructed on how to dispose of condoms, but not because of concerns about exploitation by women.) In February, more than a dozen current and former Dallas Mavericks employees told Sports Illustrated that it was an “open secret” that the team’s former president sexually harassed employees and that the management tolerated sexual harassment and domestic violence. (The former president has denied the allegations.) In response to the article, the Mavericks announced that they had suspended one employee, terminated another, and hired outside counsel to investigate the allegation.

According to ESPN, Hammon “isn’t considered a frontline candidate on a Bucks list that includes at least 10 possible candidates.” But as The New Yorker reported, many basketball observers expect her to become the NBA’s first female head coach sooner or later.