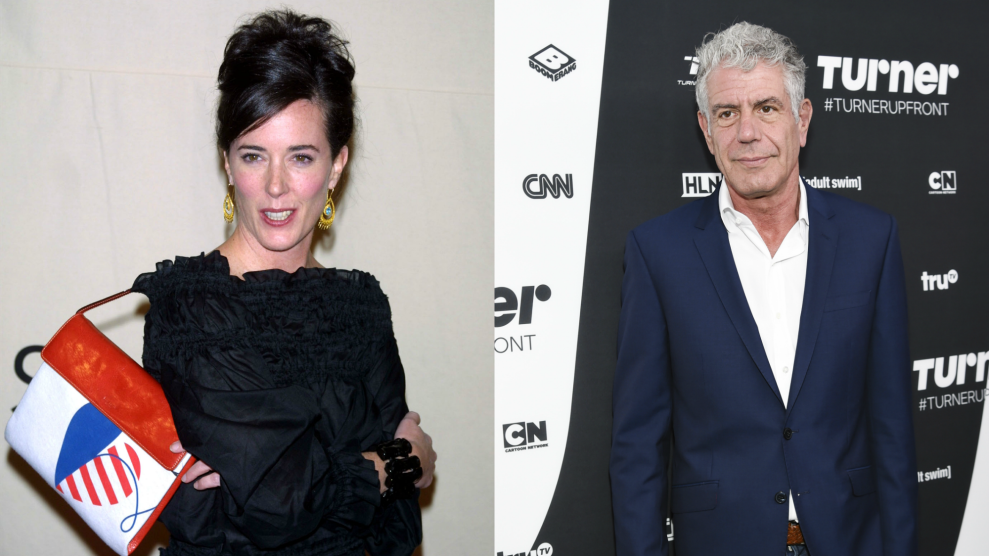 On Friday, the world was shaken for the second time in one week by a celebrity suicide. Anthony Bourdain, the 61-year-old chef, was found dead in a French hotel room this morning. His untimely death came only days after that of Kate Spade, the New York fashion designer, who died by suicide in her apartment. She was 55.

Their deaths have sparked an outpouring of public grief, dotted with reminders of the well-documented suicide contagion effect: One death can offset others, particularly a celebrity’s. Conversations have also turned to the importance of support networks—comfort found in friends, family, therapists, and even good Samaritans.

Journalist Ana Marie Cox posted on Twitter Friday morning, sharing a story of her own struggle with depression and a stranger’s small act of kindness that helped her. She clarifies that she is not suggesting kindness is enough to address mental illness, but it can help people get through the day.

Once in the midst of a major depression, I was crying (I thought softly) to myself on the F train; it was crowded. Someone, as they got off, stuck a pack of tissues under my nose. That person kept me going another day. How has someone else that kept you going? #livethroughthis

Users responded immediately. Here are a few of the stories they shared:

My mother died my first year of college. My family stopped speaking to me bc I didn’t leave school to care for younger siblings. Three friends each wrote me $100 checks every month for a year so I could go afford counseling for depression. #livethroughthis

Once I was so depressed I slept in until 6 pm. I explained why to my boss the next day. She didn't fire me. She invited me to Shabbat dinner. #livethroughthis.

During the breakup of my marrge I was in the deepest depression I've ever exp. I forced myself out of the house. While at the market, a woman said hello as we passed & tears started. She stopped hugged me so tight& said "fight." That was it. She walked away. #livethroughthis

I lost a pregnancy last year and someone who had no idea what I was going through handed me a coin embossed with an angel. She just wanted me to have it. What she didn't know is that I needed it. How has someone kept you going? #livethroughthis https://t.co/bUYWQ4uPt2

I got a call at 4 am that my sister & best friend had died unexpectedly. I couldn’t stop crying. My friends got me on the first flight out of DCA, and the flight attendants, bless them, put me in an empty row in the back & took turns sitting with me. #livethroughthis

There was a healing workshop that I knew would help me immensely, but when told the cost, I closed my almost-empty wallet and walked away, downcast. The teacher reached out the next day to share that a stranger paid my tuition. #livethroughthis

I've struggled with depression most of my life. My soph year after a failed attempt my friend gave me the 1st card. When I was in grad school & going through a hard time she saw the signs I was spiralling & gave me the 2nd card. #livethroughthis pic.twitter.com/VFVw2UjKZm

If you are considering suicide, please consult these resources: