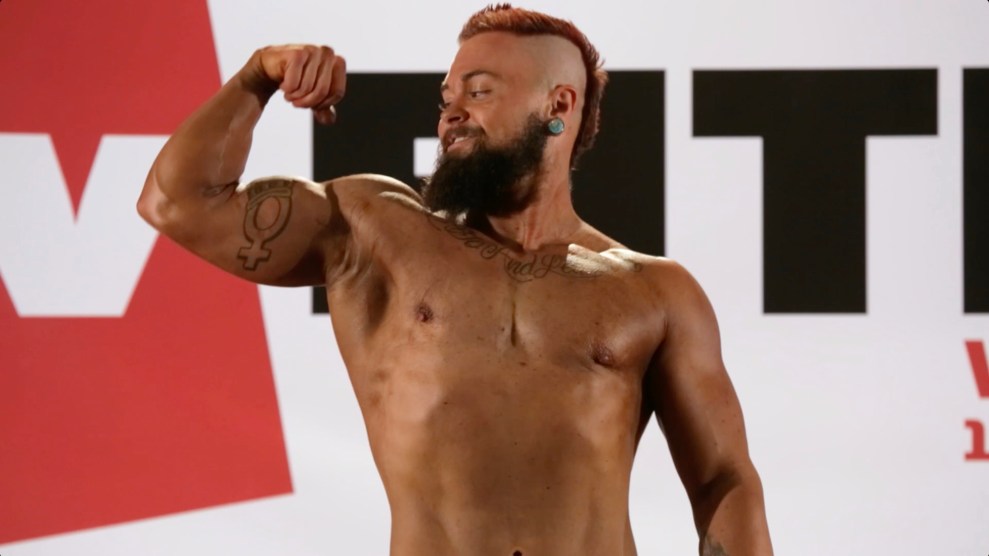 For Mason Caminiti, the most uncomfortable part of bodybuilding isn’t just the restrictive dieting or the grueling workouts. It’s the grooming. Shaving before competitions reminds him of his teenage years, and the spray-tanning can be awkward as hell. He once found himself drying off afterward in a small, open space with dozens of stern, strong men, all nearly naked. None of them knew he was transgender.

Mainstream competitions have long been the only option for trans bodybuilders like Caminiti. But in 2014, the world’s first transgender-only competition launched in Atlanta, giving bodybuilders like him the chance to stand onstage and embrace, rather than hide, their surgery scars and the ways in which their bodies are different. In Man Made—which won the jury award for best documentary at the Atlanta Film Festival and shows at the Frameline* Film Festival in San Francisco this month as part of a larger tour—journalist and filmmaker T Cooper follows a handful of trans male athletes, including Caminiti, as they prepare for the event.

The film, also showing at the Outfest Film Festival in Los Angeles in July, portrays the competitors at different stages of gender transition: Some have been on testosterone for years, while others are just starting out and haven’t had top surgery. For Caminiti, who lacked the financial resources to transition as soon as he wanted, bodybuilding was a lifeline: “If I couldn’t change my body through hormones and surgery, then I was going to change my body as much as I could through bodybuilding,” he wrote.

“It makes me feel really proud of everybody,” 26-year-old bodybuilder Dominic Chilko says in the film. “Knowing all these people came down the same path as you and all had the same courage you had to stand up there and show scars or, you know, breast tissue, and have the possibility of being judged by the world—and not care.”

I caught up with Cooper, a best-selling author and TV writer who previously worked on Netflix’s The Get Down, ahead of the San Francisco screening, to talk about pumping iron, his next TV project, and his time at a transgender summer camp.

Mother Jones: You’ve written that as a kid growing up in Los Angeles, you’d go sometimes to watch male bodybuilders work out or flex their muscles at Venice Beach. What drew you to the sport?

T Cooper: Coming from a trans childhood, so to speak, I was always drawn to images or portrayals of masculinity that felt unattainable to me, because I didn’t know better. It wasn’t like it is now, where you can go look on the internet and find information about transitioning and find guys you want to look like and all that. Back then, it was working out what masculinity was and what masculinity wasn’t. So yeah, I loved watching the guys work out. It’s not even that I wanted to look like that, but it was just fascinating for me—the ability to change one’s body so radically with just what you were given.

MJ: While filming Man Made, were you ever tempted to bulk up?

TC: Hell no! [Laughs] If you saw what they have to do with their meal prep—oh my God, I can’t imagine organizing my life to the extent where I could bring eight tupperwares with me and eat them throughout the day. How awesome would it be to look like that, but hell no.

MJ: Tell us about the four men you follow in the film.

TC: Dominic is a youngish guy from Minnesota, and part of his journey is having surgery, which is something he’s always wanted, and part of his journey is figuring out who he is in other ways—he’s adopted, and he locates his biological mother. Mason is from Ohio and does not have a supportive family of origin. He also competes in mainstream—or cisgender—competitions, and it’s just his favorite thing in the world, well, next to his wife, Anne. Then there’s Rese, a 22-year-old Atlantan who decided he would rather be homeless than live under a roof where he couldn’t be who he was. And Kennie, from small-town Arkansas, has always been interested in fitness, but he was not on testosterone, he had not had surgery, and part of him was terrified at the prospect of standing up onstage topless.

I wanted to tell the story of a wide cross section of trans male life, because I don’t see stories about trans males out in the world.  I see maybe one episode of Transparent or one as a side character on this network show or that network show, but I just don’t see authentic trans male lives especially. That’s what drew me to the story.

MJ: Yeah, it seems like the media and pop culture tell far more stories about trans women. Why do you think that is?

TC: Culturally, we’re more obsessed with stories about people giving up maleness as opposed to stories about those who are stepping into it. Most people don’t want to see or think about women becoming men—it’s a threatening concept that the whole premise of masculinity, and the power associated with it, is accessible to anybody, especially women. On the other side of the spectrum, there’s the festishization of trans women, the sexualizing of them—as all women are sexualized—which adds yet another layer of sexism, even as many still believe trans women are really just men.

MJ: Is it important to have more trans-only events like this competition, or would it be better if more trans guys could freely participate in cisgender competitions without worrying they might be disqualified?

“For me and other trans creators, the transness falls away and we’re trying to get to the humanness real quick.”

TC: Honestly both. It’s so great to have the safe space of the trans competitions. The reality is that trans people are not safe when disclosing, and that’s why there is so much tension in the scene [before the cisgender competition] where I accompany Mason to the tanning room where nobody knows we’re trans, and we’re standing in a room of like 30 guys with their dicks hanging out. It was comical, but yeah, when you think about it later, there’s the risk of exposure: There have been situations with other guys who find out they lost a competition to a trans guy and it does not inspire the best reaction. Some of that can lead to violence. There is a real lack of understanding: It’s not cheating, no one is pulling wool over anyone’s eyes. No trans guy is gonna have more naturally occurring testosterone in their body than any dude they’re competing against—you know, there is no doping. So the fact that Mason was not allowed to compete in one of the other [mainstream] competitions is just ridiculous.

MJ: Do you think films like yours can help turn the tide against anti-trans violence?

TC: I really do hope that seeing these stories can sow empathy. And I do feel like it’s very important to allow us, meaning us as trans people, to tell our own stories, because there’s an othering that happens often when nontrans people are telling trans narratives—a focus on the transition and the transness above everything else. Whereas for me and other trans creators, the transness falls away and we’re trying to get to the humanness real quick. They’re partners, they’re fathers, they’re kids, they’re rappers—there are just so many other things that are fascinating about their lives.

MJ: You and your wife, Allison Glock-Cooper, co-wrote a YA novel series you’re now adapting for TV. What’s it about?

TC: Changers is about a little-known race of teenagers who wake up in different bodies on the first morning of each year of high school. So in our series, this kid starts out as Ethan, a white kid from New York. He moves down to Atlanta, and unbeknownst to him, wakes up on the first morning of ninth grade as a white girl named Drew. He has to live all of ninth grade as Drew, and then this will happen three more times. His iteration for sophomore year is Oryon, a black boy, and so on, living as kids of different genders, races, sizes, abilities, etc. You live your life as these four different people, and when you graduate you have to choose who among those four you will live the rest of your life as, but you can’t go back to who you were before the changes started happening. It’s a very grounded coming of age story—it just happens to be coming of age to the fourth power.

MJ: You recently spent a weekend at what is more or less a summer camp for transgender guys, an experience you wrote about for an upcoming issue of Mother Jones. You showed them your film. What was it like to screen Man Made in that setting?

TC: A friend of mine founded this camp exclusively for trans men who identify as men, to give them an opportunity to have that playful experience of boyhood that most of them didn’t get to have because their transitions started later in life. You know, screening it for 100 guys of exclusively trans experience was unlike anything I have experienced or probably will ever experience again. I could hear crying and laughing at things that other audiences don’t seem to hook into as much. It was really emotional—so many people said, “I saw myself in literally every scene.” A lot of people said they feel like every trans film they see is just about transition, or where the trans person is miserable, ends up dead, beaten up, raped, killed, something. So I heard a lot that it was refreshing to see this kind of triumphant moment, not without its hard moments, too, but just the triumph of these guys living their lives and being who they are.

*Correction: An earlier version of this article misstated the name of the San Francisco film festival and misspelled the last name of Dominic Chilko.