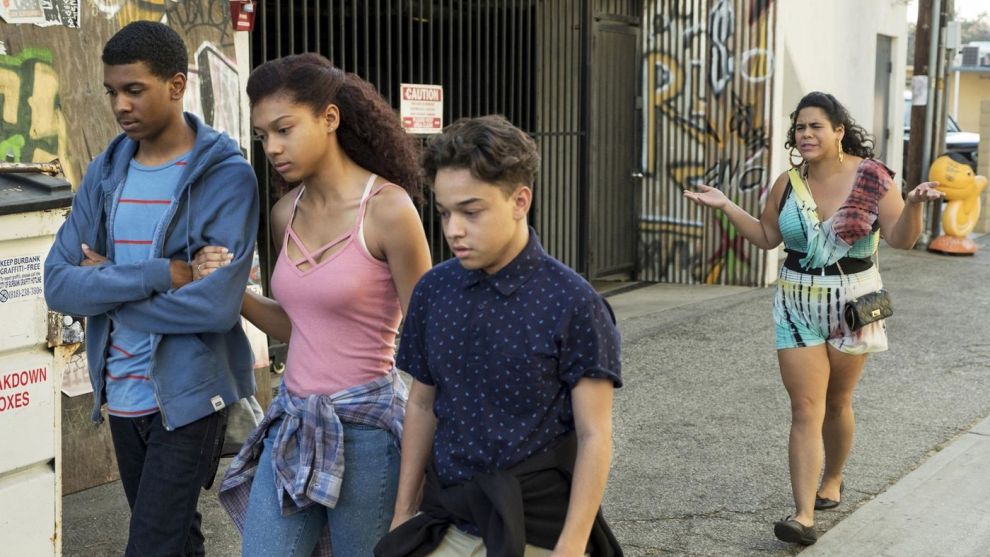 A scene from On My Block.Netflix

As a young woman of color growing up in Stockton, California, I never really felt seen on TV shows. If I’m honest, I wasn’t looking for representation either: I had grown to accept mainstream media as predominantly white. Friends and Gilmore Girls were some of my favorite shows, and while I connected with some of their characters, I never realized how seen I could feel until I watched On My Block, a coming-of-age comedy about black and brown teens in South Central Los Angeles.

For the first time, I saw characters similar to myself, my friends, and my peers. The show’s setting, a fictional neighborhood in South Central Los Angeles called Freeridge, paralleled my own upbringing in Stockton—a low-income area populated predominantly by communities of color. Communities like mine are often depicted on-screen as tragic and bleak, but On My Block was different: It broke stereotypes and offered a nuanced portrayal of its characters. It dished comedy about growing up in the hood but didn’t shy away from the real experiences that come with this background, such as gun and gang violence. I was surprised by the show’s ability to capture parts of my experience and do it justice.

On My Block is just one of a slew of new, critically acclaimed TV shows featuring majority-minority casts. Showtime’s The Chi, a drama about black youth living in the South Side of Chicago, premiered in January to great reviews and was quickly renewed for a second season. Issa Rae won a Peabody award for creating the popular HBO series Insecure, a witty and authentic portrayal of black women in Los Angeles. One Day at a Time, a comedy drama about a multigenerational Cuban American family, was also recently renewed for a third season. And, the 70th Emmy Awards nominated more people of color than ever before, from shows like Atlanta, Black-ish, and How to Get Away with Murder.

In fact, according to a new report from the University of California-Los Angeles, from 2017 to 2018, 24 percent of new shows on broadcast, cable, and digital streaming services featured majority-minority casts, which is significantly higher compared with the period from 2015 to 2016. Actors of color claimed 28 percent of the lead roles in these new shows. But this doesn’t mean there’s been progress across the board: Films with majority-minority casts only made up about 9 percent of new films from 2011 to 2016.

As a result of this TV boom, I’m not the only one feeling seen these days. One friend, Jonathan Martinez, a Latino man from South Sacramento, tells me it was “huge for him” to see a character like On My Block’s Ruby, a kind and quirky teenage boy from the hood. He says it’s rare to see boys of color display vulnerability and get their own complex storyline. Another friend, Belen Santizo, who identifies as a queer Latina, gushed about how meaningful it was to see a Latina protagonist come out to her family in One Day at a Time. And as one Insecure fan commented on Twitter:

I'm so thankful a show like #InsecureHBO exists. It's such a beautiful & honest representation of black women, black bodies & black faces ✊🏽

For me, I didn’t know I needed to see On My Block until I watched it. The show not only reflected my life—it also validated it. Instead of tuning into a show where I felt like the observer, for 25 minutes I entered a world I knew and found comfort in.

As we see more and more shows feature the experiences of people of color and LGBTQ+ and/or marginalized communities, I’d like to hear what representation on TV means to you. Which shows resonate with you and why?  Or if you don’t feel seen on screen, what would representation on TV look like for you? Let us know.