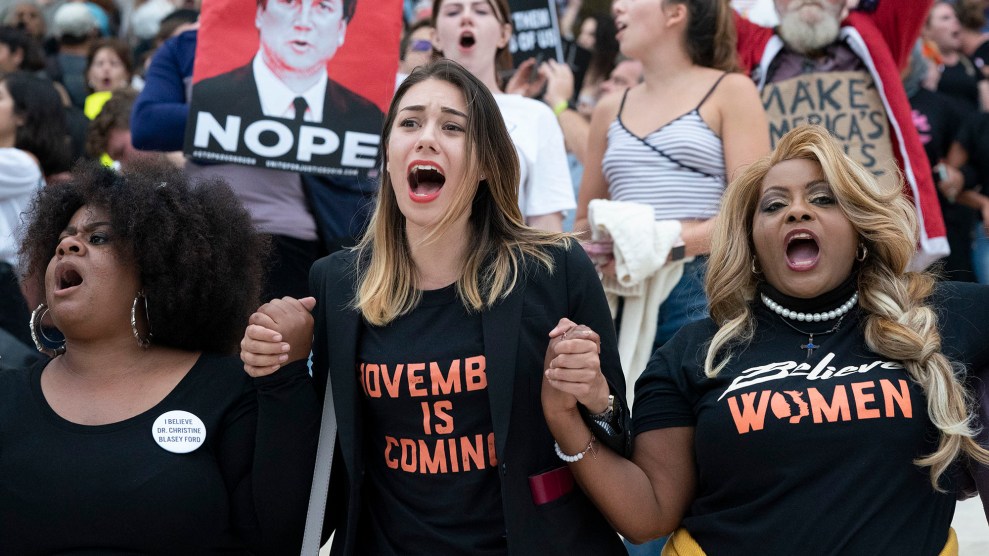 Protesters demonstrate outside the Supreme Court in Washington, DC to oppose the Senate confirmation of Brett Kavanaugh.Chris Kleponis/AFP/Getty

Senator Heidi Heitkamp knew her “no” vote might sink her reelection campaign in North Dakota this November. But there was no way she was going to vote to confirm Brett Kavanaugh for the Supreme Court, not after what she heard—and not after what her mother, who died at 88 in April, lived through.

Heitkamp’s mother had been sexually assaulted as a teenager, she told the New York Times, and “it did not make my mom less strong that she was a victim.” Her comments came after her challenger, Rep. Kevin Cramer (R-N.D.), suggested that the #MeToo movement made victims seem weak. In an emotional rebuttal, Heitkamp strongly insisted otherwise: “She got stronger and she made us strong. And to suggest that this movement doesn’t make women strong and stronger is really unfortunate.”

Many survivors, distressed at the Kavanaugh confirmation and the attacks against one of his accusers, Christine Blasey Ford, showed their own courage and came forward to share their stories after the bruising hearings. A 73-year-old retired copy editor from the Los Angeles Times said she was drugged and raped in the early 1980s by a longtime editor, who has since died. The paper’s current editor said he was deeply troubled by the account, which also spurred other female employees to share their stories.

Mother Jones readers also recounted their own sexual assaults after witnessing the hearings, including the sense of hopelessness they felt and the weight of a secret many kept for years. Despite the reopening of emotional scars, several said they were stronger and motivated to move forward.

“Dr. Blasey’s courage has lit a fire for victims and we are empowered,” one reader, Jennifer Schoon, wrote to us. “Our trauma only makes us stronger. Stand up, speak out, support each other and work toward a better world, together.”

You can hear more voices discussing how survivors are moving forward on today’s episode of the Mother Jones Podcast:

And if you or someone you know is a survivor of sexual violence, know that there are resources to help. You can also call the National Sexual Assault Telephone Hotline at 800-656-HOPE.

Recharge is a weekly newsletter full of stories that will energize your inner hellraiser. Sign up at the bottom of the story.

Have a Recharge story of your own or an idea to make this column better? Fill out the form below or send me a note to me at recharge@motherjones.com.