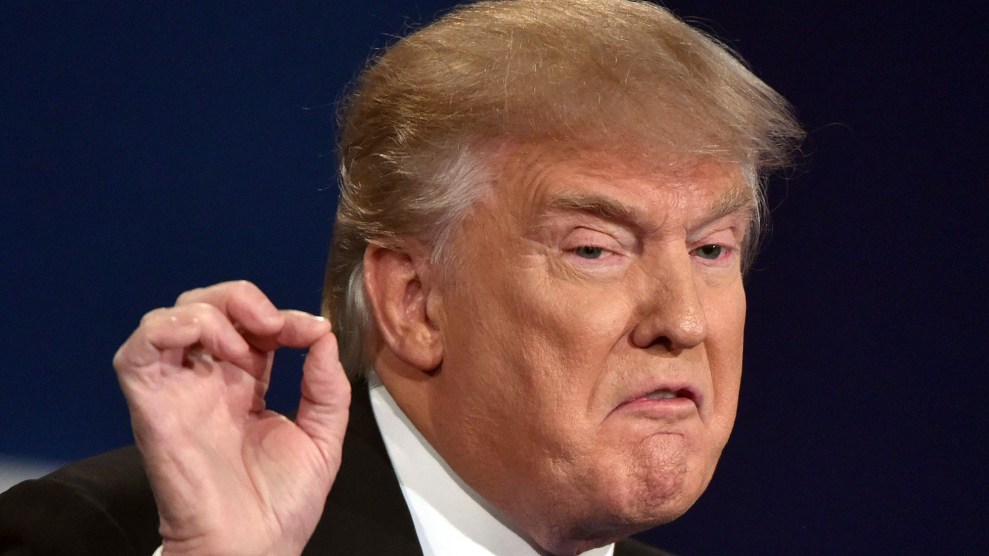 One of the unseen rituals of journalism each election night is the Hail Mary prewrite—the story you prepare for an election outcome that you don’t expect but must prepare for anyway. In November 2016, it was the “Trump wins” story, and no journalist will forget the feeling of dusting off that prewrite and hitting “publish.”

This year, the unexpected but entirely possible outcome was “Republicans Keep the House,” and it fell to Jeremy Schulman, a senior news editor in MoJo’s Washington bureau and one of those guys who will graciously take on any thankless task. I read it yesterday afternoon as we all sat on pins and needles, and I read it again last night.

“The surprise result will ensure that President Donald Trump has two more years of unified GOP control of the federal government,” it said, “giving him renewed opportunities to dismantle Obamacare, pursue even deeper tax cuts, and impose harsh immigration policies…What’s more, the outcome means that Democrats will still have little authority to conduct oversight of the administration and will lack the power to convene congressional hearings, issue subpoenas, and compel witness testimony.”

How easily things could have gone that way. The odds, after all, were stacked against change: Massively gerrymandered districts. A president who ratcheted his daily deceptions to floridly racist heights, and an electorate that, in many places, faced ever-higher hurdles to the simple act of casting a ballot. And, perhaps most importantly, a humming economy that should have been a huge help to the party in power. No wonder the TV pundits, for so much of the night, clung to the practiced savvy of conventional wisdom and tut-tutted a blue wave.

And yet. As Mother Jones blogger Kevin Drum put it, what we saw was “one of the great political blowouts of modern history.”

This is not the kind of thing you see in a country destined to slide into authoritarianism. It’s a proof of concept for a more resilient and more inclusive democracy.

It may not feel that way to the many people who poured their all into the toughest, most high-profile races of the year—races where Democrats transformed their states’ politics even in losing—but it is true. Across the nation, Democrats prevailed in the popular vote by an estimated 7 percent, a margin on the order of Newt Gingrich’s 1994 wave. “Donald Trump will never admit it,” Kevin writes, “but don’t be fooled. He was crushed and repudiated in a way that few presidents ever have been.”

And there’s more of that to come for Trump. As my colleague David Corn points out, Democrats have already laid out a road map of more than 100 entirely plausible subpoenas and investigations. (And not a moment too soon, given that Trump’s first move of this new political landscape was to remove Jeff Sessions and put in place an acting attorney general who has warned that the Mueller investigation was becoming a “witch hunt.”)

It’s a remarkable list, a reminder of all the scandals that would have been all-consuming in any environment where Congress had not abdicated its oversight authority. (The Trump Foundation! Payments from foreign governments to the Trump Organization! The State Department’s political loyalty list! And so many more.)

Trump has made clear just how much one single investigation has driven him nuts the past two years. Imagine how he’ll deal with dozens of them.

Actually, we don’t have to imagine: He showed us this morning. The president made this campaign about the media—and any form of accountability—as much as about Democrats, and he doubled down today. In a moment that we’ll probably rewatch in disbelief a decade hence, he went into full-on attack mode as CNN’s Jim Acosta asked him about his “invasion” rhetoric. “That’s enough! That’s enough! That’s enough!” he spat as Acosta soberly repeated his question, and he doubled down seconds later. “You are the enemy of the people.” (Later, the White House pulled Acosta’s press credential under false pretenses.)

The confrontation was telling in more than one way. During the campaign, journalism did not cover itself in glory: Once again we saw media repeating and amplifying Trump’s lies, blanketing the airwaves with footage of the caravan and (et tu, MSNBC?) Trump’s stadium demagoguery. There was not nearly enough of a challenge offered to the kind of rhetoric that Acosta finally called out this morning. As the Washington Post’s Margaret Sullivan put it:

Too many journalists allow Trump to lead them around by the nose, which is why you’ve heard so very much about that migrant caravan in recent weeks. With the president as their de facto assignment editor, too many seem to respond “how high?” when Trump says jump…Skepticism and context make an appearance in media reports, but it’s often too little and too late. Journalists too often parrot what the president says and giddily follow his shiny-object distractions du jour.

Maybe we’ll see more journalists do what Acosta did, pivoting from repeating the president’s lies and distractions to putting them in context. But there’s one thing reporters can’t do: change the business model. Television in particular, along with a lot of digital media and what’s left of print, are driven by the things that push people’s buttons, and in politics, the outrage button is the most powerful of all. As CNN chief Jeff Zucker acknowledged in a recent interview, Trump means ratings.

“People say all the time, ‘Oh, I don’t want to talk about Trump. I’ve had too much Trump,’” he told [Vanity Fair]. “And yet at the end of the day, all they want to do is talk about Trump. We’ve seen that, anytime you break away from the Trump story and cover other events in this era, the audience goes away.

This is the dynamic that gave us a washed-up developer as a reality star—it was Zucker who greenlit The Apprentice back in 2004—and then a president. And it’s the dynamic that will continue to give us shallow, sycophantic, or sensationalist coverage in the critical years to come.

We need better journalism for the fight ahead, and it’s going to have to be driven by economic incentives other than the outrage button.

There are some encouraging signs on this. For a few marquee national outlets, digital subscriptions are now a big source of revenue. But a few big companies with wealthy owners aren’t going to be enough to ensure the vibrant, diverse media ecosystem democracy needs.

That’s why, here at MoJo, we are so obsessed with establishing another model. Just as some of the most inspiring candidates of this political cycle were built on grassroots support—no PACs, no fleets of consultants—we’ve seen more and more readers sign up to support the journalism they rely on. There are now some 250,000 of you supporting Mother Jones, and in the past six weeks, another 1,250 have signed up as sustainers, committing to a few dollars each month to make sure our reporters can hold feet to the fire, no matter what the news cycle brings.

Last night was a reminder of two things. One: Success doesn’t always come the first time around. To change the course of history takes persistence and a shoulder to the wheel, especially in the face of disappointment.

And two: When you do commit to that work, you’ll see change you couldn’t have dared to expect. Our editor-in-chief, Clara Jeffery, summarized just a few of the historic shifts on Twitter: Americans elected more than 100 women to the House of Representatives, including the first two Muslim women and the first two Native American women. First-time candidates unseated decadeslong incumbents; candidates of color broke through in majority-white districts; a gay man was elected governor without anyone even making a big deal of it; and a broad spectrum of voters, left to right, voted to expand fundamental rights—to voting, and to health coverage—in state after state.

This is not the kind of thing you see in a country destined to slide into authoritarianism. It’s a proof of concept for a more resilient and more inclusive democracy. And it’s a demonstration that lies and demagoguery can only go so far. That’s the validation we need to buckle down and get to work—investigating corruption, and nurturing the debate over America’s future that begins right now.