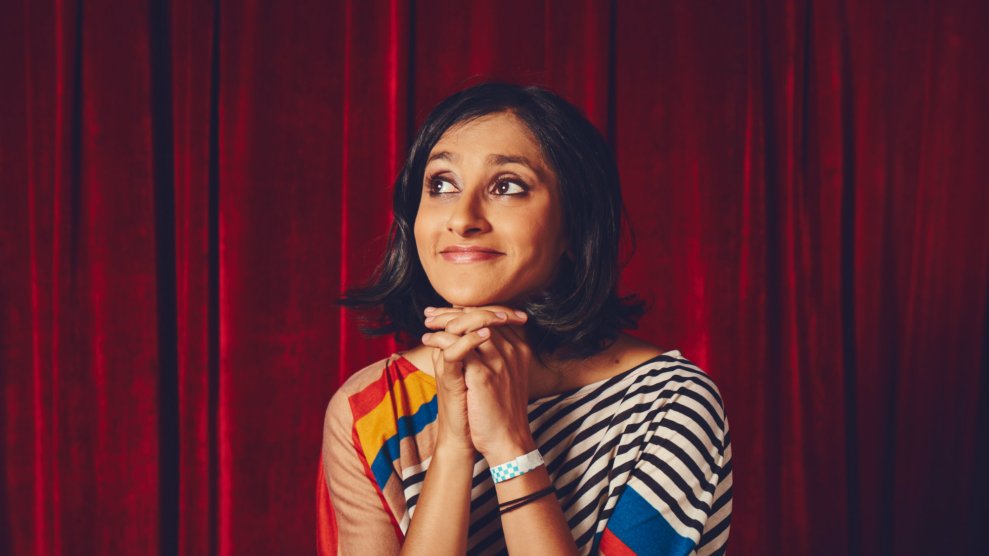 Aparna Nancherla is a comedian who also happens to be an introvert grappling with depression: “A lot of people have a fear of missing out,” she jokes. “I have a fear of missing in.” Petite and in her mid-30s, she has been performing for more than a decade, but suddenly she’s everywhere, with quirky guest roles on Crashing, Master of None, Inside Amy Schumer, and BoJack Horseman. Last January, she landed her first starring role, on Comedy Central’s Corporate, where she plays a weary human resources manager. Two months later, Netflix devoted an episode of its series The Standups to her off-kilter comedy—a set that covered clown emojis and texts from her South Indian immigrant parents. In November, she appeared in Paul Feig’s A Simple Favor, and announced that she’ll be part of an all-Indian cast for Mira, Royal Detective, a new Disney Junior show premiering in 2020.

Nancherla can very much relate to the oddball characters she inhabits, she tells me after her set at an immigrant rights fundraiser in San Francisco: “I’ve always had an affinity toward people who are a little bit outside the group.”

Mother Jones: How do you decide which parts of your life to joke about?

“I was struggling with depression; I was having trouble writing. I did it on stage because I was like, well, I haven’t really written anything else.”

Aparna Nancherla: It started out very observational: Here are things that happened to me, and I’m just going to talk about them. But in the past few years, I’ve started talking more openly about mental health stuff. I was struggling with depression; I was having trouble writing. I did it on stage because I was like, well, I haven’t really written anything else.

MJ: Is it therapeutic?

AN: Sometimes I’m like, are you overindulging? Are you making it worse by thinking about it all the time—or better by trying to find ways to analogize it? I think overall, to frame it in a humorous way helps me to make sense of it. I did a joke about how anxiety is like there’s an improv group in your brain—an improv group that’s too edgy.

MJ: What were things like for you growing up?

AN: I was pretty introverted and also pretty sheltered. My parents kept close tabs on my older sister and me. For a long time we weren’t allowed to go on sleepovers, we weren’t allowed to date—my sister broke down a lot of the barriers. My mom made us take public speaking classes when we were younger, and [at a contest] I did this speech on Bollywood movies and how there needed to be better quality control. My speech was funny, and everyone else went for more serious topics. I ended up winning. That was the first time I was like, “Oh, humor can be used to engage people.”

MJ: What were your career aspirations?

AN: I actually ended up majoring in psychology in college. After I graduated, I interned in DC at NPR and worked at a trade magazine. At night, I was doing open mics and taking improv classes and trying to figure out if comedy was something I could do full time. I moved to LA four and a half years after I started in DC. That was the official quit-the-day-job and try to make a serious go of stand-up.

MJ: What did your parents think?

AN: They’ve always been very supportive. I think they were worried because they were like, “Oh, you’re quitting your job?” They’re not that tapped into pop culture and entertainment. A lot of times they’ll learn about something I did from their friend who will be like, “We saw your daughter on this thing.”

MJ: Yeah, my Thai parents don’t really know what I do, either.

AN: It’s kind of nice, because then this isn’t the be-all and end-all.

MJ: Can you recall your first successful show?

AN: There was this NBC diversity talent search for comedians who were outside of the box of the typical straight white guy categories. I auditioned and got chosen.

MJ: What did you perform?

AN: It was a joke about being a brown person: You can be so many different ethnicities when you’re a brown person—it’s just sort of lumped into this one category. I didn’t talk about identity a lot when I was starting as a comedian. But I did have that one joke.

MJ: Do you ever feel pigeonholed because you’re a woman of color doing comedy?

AN: When I started, comedy was still dominated by straight white men. People would be like, “Oh, I like that you don’t talk about being a woman of color.” At first, I was like, “Oh yeah, that’s good.” Then later I saw it for what it was: They didn’t want you to talk about how you’re different. But you should be allowed—it should be okay to make audiences have to think about experiences other than their own.

MJ: What were some shows that really didn’t work?

AN: It is a job where you fail pretty regularly. I did a set two weeks ago at a pizza shop in Brooklyn, and it was going so bad—but also the mic started malfunctioning. I had to do my set without the mic. You just have to try to roll with the punches. But there’s something freeing about the fact that even when you get a certain level of success or perceived stability, it still can be so bad.

MJ: How would you characterize your approach?

AN: Somebody once described my comedy as thoughtful goofiness. I think that’s a good way to describe it—there’s a silliness, but it’s someone who might overanalyze a lot.

MJ: You did a satirical web series called Womanhood with Jo Firestone. What’s your favorite part about actual womanhood?