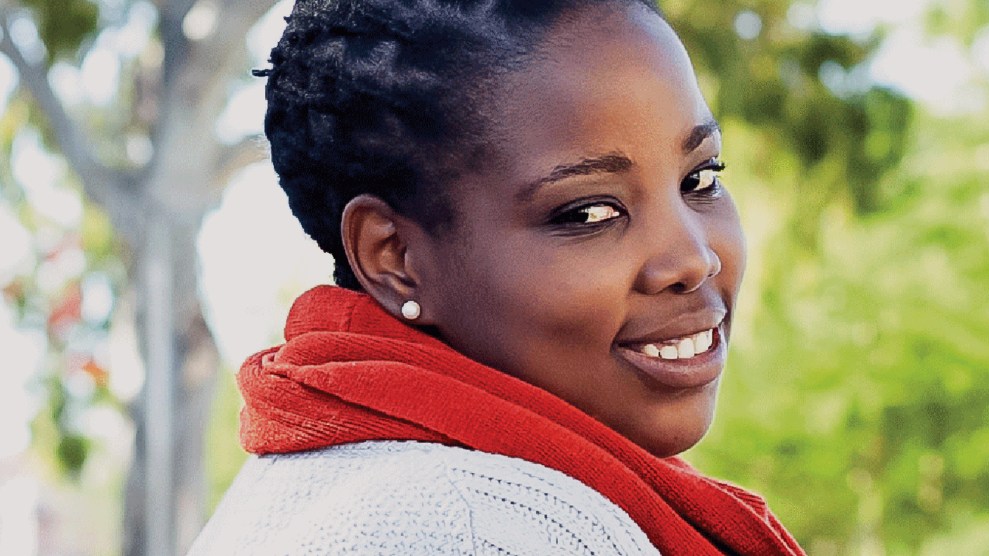 Novuyo Rosa Tshuma describes the mood, after Zimbabwe won its independence from Britain in 1980, as a “release of breaths long held.” But that optimism gave way to a reign of terror. From 1983 through 1987, an estimated 20,000 civilians were killed by forces loyal to Prime Minister Robert Mugabe in what became known as Gukurahundi, or “the early rain which washes away the chaff.” The atrocities were excluded from the nation’s history books—Tshuma’s own family couldn’t bear to speak of them. Now, she says, “it’s become this thing that I cannot get out of my head.”

Tshuma grew up in Matabeleland, where much of the violence took place, and eventually made her way to the United States, where she was accepted to the prestigious Iowa Writers’ Workshop. Her stunning new debut novel, House of Stone, wrestles with the legacy of Gukurahundi and its place in the national consciousness. “At home, I would have become aware of the potential dangers of what I was doing—the limits on what we are able to discuss and how,” she says. “In Iowa, I just thought, ‘Let me keep this as fiction and see what happens.’”

Mother Jones: Where did things stand in Matabeleland as you were growing up?

Novuyo Tshuma: I was born just a year after the Unity Accord to end the genocide. That trauma manifested itself through our parents, who had a lot of hostility toward the Shona people. But the genocide, I never heard stories about it from my own family. My mom won’t talk about it. Growing up, if you’d say something political you’d get a whack on the shoulder, but no one would tell you why you couldn’t speak about these things. It was associated with trouble and danger. I didn’t tell my mom what the book was about. She hasn’t read it yet, and I’m really nervous. I’m not sure how my family will react.

MJ: What was it like exploring different versions of your country’s past?

NT: History is a very personal thing. Everyone has an agenda: the Shona, the Ndebele, ex-Rhodesians. It was fascinating to see the different viewpoints. Many people left the country after independence because they were scared it would become Marxist—many grew up not knowing anything about that time, except that it was horrible.

MJ: You tell your story through Zamani, a character who is not always likable.

“I tried to get a Zimbabwean publisher and I couldn’t because they were worried they could get sued.”

NT: It was too easy to have an innocent character—a victim of oppression. But some of the things that make him hard to like are just a response to hardship. After independence, corruption became normalized. To get food, you had to go to the black market. You had to smuggle goods from Botswana or South Africa. You would sell extra rice to your neighbors and friends at exorbitant prices. Everyone did that. But Zamani is also funny. I had fun crafting his wit and his maybe not-so-funny jokes. That’s also part of my experience of home: laughter in response to hardship. Zamani embodies the best and the worst of Zimbabwe. We have been victims, but we have also been complicit.

MJ: Mugabe plays only a minor role in the book. How come?

NT: He’s boring. He’s a megalomaniac. I didn’t want to waste too many pages on him. We’ve always been told it’s the kingmakers who should feature most prominently in our history, but we also make our history.

MJ: Are you worried about backlash?

NT: Some people have said I should be. There was a documentary of the genocide, and the CIO, our version of the CIA, was all over the guy who made it. But maybe our government doesn’t care as much about fiction. I don’t know. I tried to get a Zimbabwean publisher and I couldn’t because they were worried they could get sued.

MJ: When did you know you wanted to be a writer?

NT: I was a bookworm. My mother was a teacher, my father a lawyer, so I come from a family that encourages reading. As a child I constantly got books for presents. At school, we had the Hardy Boys, Nancy Drew—all those American picture stories. I became conscious of being an African writer when I was 19, when I saw Chimamanda Ngozi Adichie on BBC’S Hardtalk Extra. I thought, “Oh, here’s an African woman who is writing.” That made me believe I could pursue writing as a career. I sent her fan mail, and I begged her to send me Half of a Yellow Sun. She actually sent it! It was signed, “To Novuyo, with the hope that you’ll keep reading and writing.” That gesture felt really big to me.

MJ: What was it like to write this book in the United States?

NT: Very emotional! I felt like I was writing the book of my life. At the Iowa Writer’s Workshop, I was in a bubble, surrounded with fellow writers who encouraged me. Being so far away from home was a relief. I don’t think I could have written the character of Black Jesus the way he is written had I been home.

MJ: Do you see parallels between Zimbabwe and the United States?

NT: Trump feels like the perfect cliché African dictator. But there are differences. There have been massive demonstrations against Trump. Here you have the ability to openly discuss and satirize, show your distaste for the president. That’s something we’re lacking in Zimbabwe. When I was in London, my friend told me there was going to be a protest against Trump. I said, “Thank you so much for letting me know, I’ll stay away.” But they were actually inviting me! At home, if you’re told that there’s a march, you know it’s a warning to stay away, because things get violent.