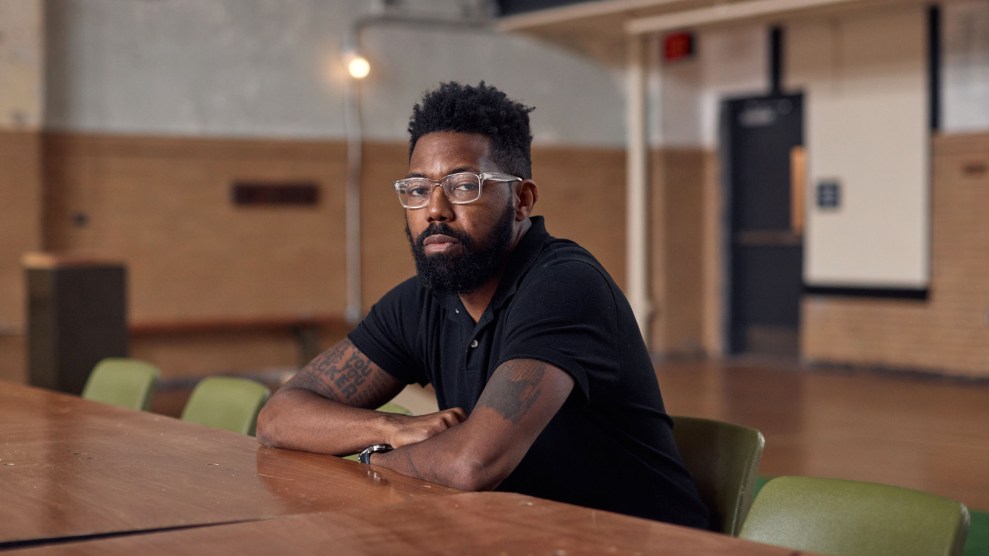 White people are trying not to see Damon Young. On a chilly December Sunday, he’s sitting at the crowded bar of Pittsburgh’s Ace Hotel, bent over a plate of eggs, potatoes, bacon, and a side of fruit, attempting to explain the arc of an unconventional writing career that—here in the shadow of the nation’s media hubs, after years of underemployment—has finally landed him some money. Real money. Enough to buy a renovated row house with his wife, three-year-old daughter, and, as of two days ago, infant son. It’s the kind of comfort that seemed unfathomable when he was growing up a stone’s throw from here on “the hottest block of East Liberty,” once considered some of the city’s most dangerous turf.

Young isn’t easy to not see. A bearded, 6-foot-2 former point guard with a high-top haircut, he’s dressed in black jeans and a black cutoff crewneck, the tattoos just visible on his biceps. Nor is he shy, although he does double Dutch his way into conversation: patiently finding the rhythm before leaping in with his soft-spoken baritone. Having spent most of his 40 years here, Young has the local elocution that transforms a word like “there” into “dare”—the man is Pittsburgh to the core.

As Young, between bites, tells me about the blog he co-founded in 2008, white people keep blundering into our space.

It’s a city on the move, or so it thinks. In nearby Bakery Square, the sterile shapes of redevelopment are everywhere: clean, rectangular sidewalks leading to massive, rectangular high-rises built to attract transplants seeking an alternative to, say, Brooklyn, and tech players like Google that would love to boast they had a hand in reviving a once-mighty city’s fortunes after decades of postindustrial stagnation. The Ace, which the Wall Street Journal dubbed “the cutting edge of the city’s revival,” is a century-old former YMCA renovated with a cozy, hipster vibe: white walls, black details, blond-wood coffee tables, and 1960s-style lounge chairs in greens, yellows, and grays. It’s something of a second home for Young, who writes by day for his popular website, Very Smart Brothas—VSB to devotees—and has been hitting the Ace lobby late at night to complete his new memoir, What Doesn’t Kill You Makes You Blacker. The hotel staffers see him. They give him a nod and smile.

Our fellow diners do not. As Young, between bites, tells me about the blog he co-founded in 2008 with Panama Jackson, a DC-based former congress­ional budget analyst, and a third partner, white people keep blundering into our space. First, a middle-­aged white man reaches directly between us to pay his check. Failing to get the bartender’s attention, he lingers, arm outstretched, oblivious to the people he is interrupting, who have stopped eating, stopped talking, and are now staring at him, waiting for him to move—he eventually does. Shortly thereafter, a middle-­aged white woman, without even an apologetic glance, reaches right over Young to grab the hot sauce sitting, clearly in use, next to his plate.

It is Young’s wry commentary on such daily indignities that has made him one of the freshest, most impor­tant black voices on the internet. After the hot sauce grab, he smirks, laughing it off. Welcome to Pittsburgh, his smile seems to say. It’s a city Young loves so much that he feels a duty to keep it honest. “Just tell the fucking truth,” he wrote on VSB in October, after a white supremacist marched into a local synagogue and murdered 11 worshippers. “Don’t pretend like Pittsburgh is this singular lodestar for justice and progressive thought.” Yet living outside the media bubble enables him “to write in a way that isn’t self-consciously entertaining but is mindful of the fact that people need to read this.”

A typical VSB post requires readers to be schooled in both pop culture and the psychic dissonance nonwhite people often experience in their dealings with the majority. Young draws on aspects of white privilege to create viral memes. There’s Darth Becky, a mashup of the Star Wars villain and the seductress in Beyoncé’s song about infidelity—Young describes her as a “privileged young White woman who exists in a state of racial obliviousness that shifts from intentionally clueless to intentionally condescending.” Darth Susan is the workplace version, who uses her whiteness to gain power. And Donald Trump is “Y’all’s Triflin’-Ass President.” Young is “rigorous in general, but even in his humor he’s rigorous,” says Akiba Solomon, senior editorial director of the news site Colorlines and co-editor of the anthology How We Fight White Supremacy. “When he breaks down race stuff in a serious way, he’s really rigorous, but his humor also opens cultural doors. It reminds us of who we all are.”

“What’s the problem with creating a space that looks out for people who have looked after you?”

When you stop to think about it, Pittsburgh, home to 20th-century black literary icons such as August Wilson and John Edgar Wideman, is a fitting place for what has come to be one of the web’s premiere black culture blogs, with 2 million to 3 million unique monthly visitors. In addition to calling out fundamental truths about the black experience, Young and Jackson write wittily of their personal pains and triumphs. The content speaks directly to black people, even though Young is more than capable of writing for the masses. “Perhaps this doesn’t seem like a big deal,” he explains in “I Have Post-Brokeness Stress Disorder,” a 2018 New York Times op-ed. “But losing $20 and not missing it enough to tear my home apart looking for it is a relatively new privilege. Five years ago, I could account for every quarter belonging to me.”

Young’s memoir will inevitably bring his worldview to a wider crowd, but VSB’s demographics skew young, black, educated, and female—a profile that made the website attractive to big media suitors. In 2017, the Spanish-language conglomerate Univision purchased VSB and folded it into The Root, the black online magazine founded by Harvard professor Henry Louis Gates Jr., which it had acquired two years earlier. “We looked for and recruited writers that reminded us of Damon and Panama before we were finally able to make them part of The Root family,” says Editor-in-Chief Danielle Belton. “Very Smart Brothas was edgy and funny and relatable. We wanted to emulate that voice.”

The Root had about 7 million unique monthly viewers prior to the purchase. Today, despite factors (like a capricious Facebook) that have suppressed traffic to news sites, it averages more than 10 million. The Root also adopted VSB’s engaged readers, who routinely comment on posts, purchase T-shirts with slogans like “I Love Bougie Black Girls,” and show up at media events.

Young’s most controversial writings, not surprisingly, poke at race and gender orthodoxies. In one post, “Straight Black Men Are the White People of Black People,” he ranked his gender privilege on the hierarchy of racial identity, drawing fierce condemnation. But Young wasn’t fazed. “What’s the problem with creating a space that looks out for people who have looked after you?” he says.

Young takes pains to note that black women have been crucial at every stage of his career. He wrote poems in college—mainly to impress a woman, he says—and one of his cousins, Pittsburgh artist sarah huny young, built him a website so he could share his work. Jamilah Lemieux, his former editor at Ebony.com, gave him one of his first writing gigs. And then there was Alecia Young, who encouraged him to apply for a city arts grant so he would be able to blog full time. (She married him, too.)

“I have a deep fear of hurting people.”

But it was a gender-related misstep that inspired an entire memoir chapter: “How to Make the Internet Hate You in 15 Simple Steps.” In 2012, he had responded to an Ebony piece that argued men should never tell women how to dress to avoid being raped. “But why can’t both genders be educated on how to act responsibly around each other?” Young wrote on VSB. “What’s stopping us from steadfastly instilling ‘No always means no!’ in the minds of all men and boys and educating women how not to put themselves in certain situations?”

The backlash was immediate, and it was only made worse by a nonapology in which Young doubled down on his point. He eventually reached out to trusted women in his circle and instead of fighting just listened—about times they were blamed for being sexually assaulted. He admitted he was wrong and vowed to do better. “I have a deep fear of hurting people,” he told me. “I don’t want to be seen as this kind of person. I don’t want my work to be seen as this type of work.”

“Visibility is something that Damon has just accepted as a consequence of doing the sort of work he enjoys,” Lemieux told me. “I think that’s why he’s able to attain that feminist education in the way that he did.”

Back at the Young residence, a.k.a. “the house the vsb built,” the scene is surprisingly calm. Zoe, his daughter, is out with his mother-in-law, and infant Levi is napping upstairs with his wife. Young sits on his gray sectional. He appears to be bracing for a dramatic change in pace, personally and professionally. Right now he’s in that fuzzy, surreal newborn-parenting phase. But he’s also aware that his book, and the publicity it demands, will soon yank him out of his comfort zone—a writer unaccustomed to mainstream attention is about to be the subject of interviews, panel discussions, and critical write-ups.

For years, he and Jackson have hosted casual meet and greets with readers. A recent one I attended, at a rooftop bar in New York City, had the vibe of a gathering of college friends. A dozen or so black women turned up, and Young and Jackson made small talk while snacking on sliders and facilitating, rather than dictating, the conversation, which is part of what makes the blog resonate with its audience. The memoir, as Young sees it, is a chance to connect with readers at a more leisurely pace and to broadcast his ideas more widely—as a guest on cable programs, for instance, or a speaker on college campuses. One other fringe benefit: It’s going to make him a lot harder for white folks to ignore.