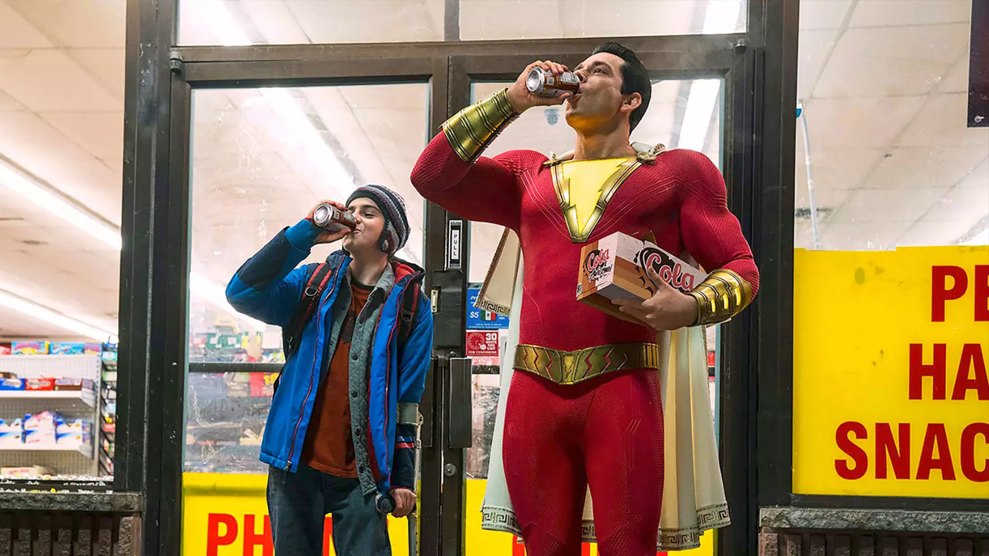 ‘Tis a dark and emotionally stormy night as the family sedan speeds through the snowy roads of upstate New York. A bespectacled father sits behind the wheel; his favored son, the eldest one, in the passenger seat; and in the back, the other son, the lesser one. The runt. The dad and his princeling pick on the boy in the back. The kid is hurt by it. But it’s not new. He’s not surprised. This is how it’s always been. Every day since as far back as he can remember he has been told he is not good enough. And he never will be. And he doesn’t know why. He doesn’t know why his father doesn’t love him, and he doesn’t know why his brother is so much more worthy. He despairs. That’s what the back seat is for. The good things in life—love, excitement,  happiness, optimism—the magic that makes life worth living? Those only happen to people who sit in front.

Or not? Suddenly, from the back seat—POOF!—the kid is transported to a castle! There is an old wizard who tells him that if he passes a test, the wizard will give him his power! The kid nods but does not ask any follow-up questions about the nature of the test. Then some gargoyles with worryingly bright-red eyes come to life and start telling the child not to listen to the nice wizard and to instead follow their orders. They can make him even more powerful! The kid goes with the gargoyles. Ah, but this was the test. The wizard tells him that he has failed, and that he’s a loser who will never amount to anything. His father and his brother are right. And then—POOF!—he’s back in the car.

He starts to scream because he has had a traumatic few minutes. He has spent the entirety of his brief life struggling to get his head above water and for this little moment finally found oxygen—he had hope, he had magic! Until the wizard sent him crashing beneath the waves again.

The screaming distracts the father, who veers into oncoming traffic, swerves off the road, and having barely escaped a head-on collision he berates his son just long enough to get T-boned by another car. Standing over their dad’s crippled body, the brother tells the kid that it is his fault. That’s when it hits him: His life, as unbearable as it has been, is about to get unimaginably worse.

Anyway, this kid is the villain of the film Shazam!, so if you felt sorry for him or were rooting for him, whoops!

I loved this movie. I loved it like I love seltzer. (Both are refreshing and surprising!) I loved it as much as that father loved the son who sat in the front.

I didn’t know what to expect with this film because I didn’t see the trailer and I didn’t know anything about Shazam “the comic” because, to be blunt, I do not read comic books. I am a very serious person who only reads fancy books by Charles Dickens. Not the original English versions either! I read the French translations.

So this Shazam character was a mystery to me. That’s a new feeling, walking into a superhero movie not knowing a thing about the superhero. One of the problems with the genre at the moment is that even general audiences are aware of the basic story. I have seen Superman crash-land in a field many times. I know Batman is a rich loner whose main superpower is his detective skills. Spider-Man was bit by a spider and now shoots webs from his wrist. I get it. The best of these films still find ways to make these stories compelling. But a lot of them don’t. If the filmmakers don’t subvert the myth in some interesting way, the films become Robin Hood, a story everyone knows that Hollywood insists on retelling to a decreasingly enthusiastic response. Thanks to its own ubiquity, the escapist superhero film has trapped itself!

Shazam! is basically Big, but instead of a little boy turning into Tom Hanks and working at a toy company, he turns into Zachary Levi and is a superhero. Greenlight!

It’s a very funny film filled with adorable children punctuated by zany superhero escapism. You should see it!

If the movie feels more liberated than some of its DC peers, maybe that has something to do with the absence of Zack Snyder. It’s so nice that Snyder is not running the DC Extended Universe anymore. The first few movies (Man of Steel, Batman versus Superman, Suicide Squad) were inane, crushingly terrible films that were impossible to enjoy on any level. But then we got Patty Jenkins’ Wonder Woman, which was quite good, and Snyder departed midway through Justice League, which was at least watchable. Aquaman was a blast!

This new class of DCEU films is far more coherent than the earlier films—and far more fun. They reject the oppressively flat tone of BvS, and Shazam! lightens the tone even more. Its success further demonstrates the promise of Warner Bros.’ DC catalog when the movies ditch the Dickens-in-French self-seriousness and remember the escapism.

Shazam! is in theaters now.