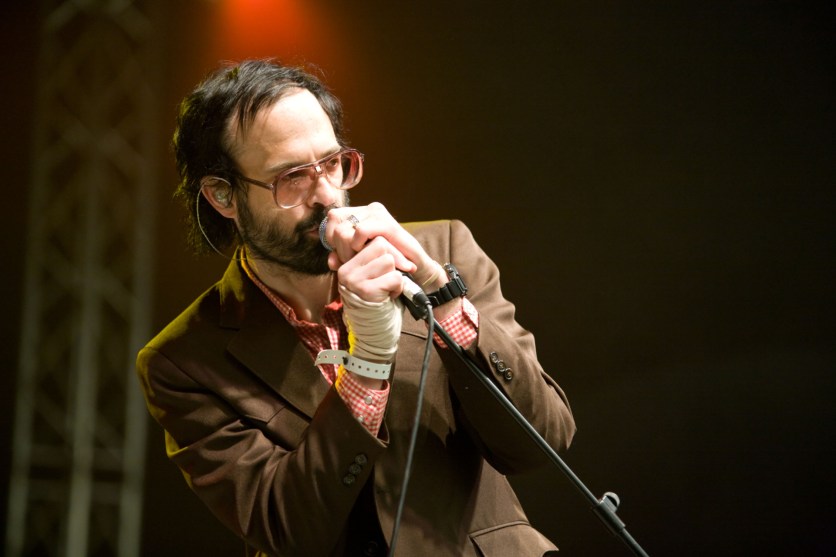 David Berman, who died Wednesday at the age of 52, was most famous as the frontman of the band Silver Jews. He wrote with a cheeky melancholia that brought him a certain kind of fame throughout the 1990s and 2000s.

Some of his lyrics were infused with an offbeat surrealism that was popular in literature of that time. Berman’s characters included men with “mustaches caked with airplane glue” and “Jesus in a runaway shelter” and “a vocal martyr in the vegan press.” He asked in one song, “Can you summon honey from a telephone?” The lines could fit easily into the “hysterical realism” that critic James Wood saw floating through the fiction from that era of Thomas Pynchon, Zadie Smith, and David Foster Wallace. He could be weird and funny about loneliness.

His new band Purple Mountains released a self-titled album last month—they were set to begin a tour this Saturday—that was full of this cockeyed sense of desolation. Whereas Pavement channeled the slacker vibes of the era, Berman’s projects took burnout culture to a haunting place, both strange and sad. (Berman attended the University of Virginia with Stephen Malkmus, Pavement’s singer.) Berman treated ennui seriously. Which is to say that he made it into a joke. “In 1984 I was hospitalized for approaching perfection,” he sang, somehow conveying the line with both a wink and an air of genuine doom. He has a song titled, “Honk If You’re Lonely Tonight.” On the new album Purple Mountains, the track “Margaritas at the Mall” shifts from the death of God to an image of getting blasted on, yes, margaritas in the same offhand manner that we might wander from a Cinnabon to a JCPenney.

How long can a world go on under such a subtle God?

How long can a world go on with no word from God?

This happy hour’s got us by the balls

Drinking margaritas at the mall

In later years, Berman appeared in photos with a paunch and tinted glasses, his hair receding on top and flowing down to his shoulders in wispy brown bands. He seemed to look for contradictions in modern life. Perhaps that’s because, as we’ve written before, he had a “grave secret”: his father was the lobbyist Rick Berman, a self-proclaimed “Dr. Evil” whom the younger Berman hated. (“A world historical motherfucking son of a bitch,” is how Berman described his dad, whose work consisted of trying to “ensure the minimum wage did not move a penny from 1997-2007!”) In a recent interview with the Ringer, Berman rhapsodized about a Johnny Paycheck song as “silly and moving at the same time.” That was his own music, too—a laugh while looking into the abyss.