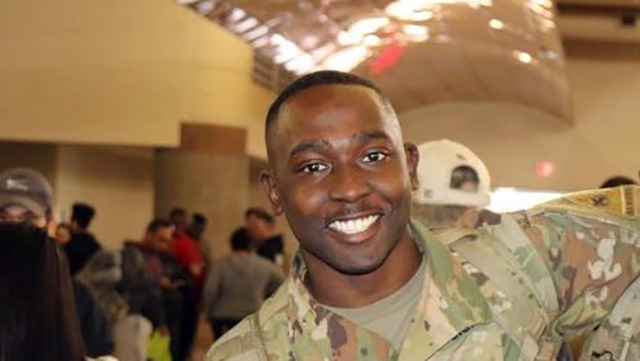 Recently back from duty in the Middle East, Army Pfc. Glendon Oakley Jr. was hanging out in a sports store in the El Paso mall on Saturday when the panic began.

He took out the 9mm Glock he had a license to carry.

Oakley served as a sort of rear guard for employees of a Foot Locker as they closed the security gate and decided to run toward an exit, away from the sound of gunfire.

Then he saw kids, about a dozen of them, screaming for their parents in an open play area in the mall. He tried to get fleeing bystanders to help, but no one stopped.

In an interview with Task & Purpose, Oakley said that despite his training, “[I was] scared for my life” during the mass shooting, which killed at least 22 people and wounded dozens.

“I heard four kids died,” he said. “I wish I could have gotten more kids out of there. I wish those guys who ran would have stayed…I just think, ‘What if that was my child? How would I want some other man to react?’”

On television and social media, Oakley, the son of career military service members, was hailed as a hero. “A fine soldier and a good man with a big heart,” tweeted Matthew McLellan. “He deserves a country in which he doesn’t have to rescue children from a shooter in a mall.”

In related news, thank you to El Paso sixth grader Ruben Martinez, whose challenge to perform an act of kindness for each person killed in the shooting (the toll has since risen) has gained momentum on social media:

My 11 year old came to me with an idea. #elpasoCHALLENGE He challenges ALL El Pasoans to commit 20 Random Acts of Kindness. One for every person that was killed in our city’s mass shooting. Let’s get this done El Paso. @abc7breaking @kels1142 @YsletaISD @EPPOLICE @elpasoisd pic.twitter.com/pvy5Q9G4f6

Thinking of others. Carrie Jernigan’s daughter wanted to get a pair of shoes for a friend but didn’t know the size. At a Payless store, which was closing, the Arkansas woman had an idea. “How much,” she asked a clerk, “for the rest of the shoes in here?” She bought all 1,500 pairs and is helping distribute them to people in need. Thanks to Erin Ruberry for the tip. (NBC News)

Never too late. This longtime car mechanic was looking for something new. Carl Allamby wanted to get a college degree. One thing led to another, and at 47, he has become a doctor in his hometown of Cleveland. Allamby’s college path began in 2006, when he decided to get a business degree. The last class he took, biology, changed his life. “After the first hour of class, I was like, ‘This is what I want to do. I have to go into medicine.’ It was like a light switched on.” He went to a community college, got a second undergraduate degree, and enrolled in med school. “It was a steep climb, but he had the intellect,” said Dr. Ormond Brathwaite, Allamby’s chemistry professor. (Cleveland Plain Dealer)

Teach by doing. Plastic waste is being recycled into a type of brick to be used in building schools in Ivory Coast. The bricks, which also could be used for teachers’ housing, promise to provide a decent living for the many women who are doing the recycling, said Mariam Coulibaly, who has been collecting plastic waste for 20 years. “We think there is a future in plastic,” she said. Thanks for the link, Elizabeth Arnold. (New York Times)

A path to success. The number of Americans dropping out of high school has fallen by two-thirds since 2000. Why? One primary reason: More jobs require diplomas. The drop is even more pronounced among Latino and Latina teens (75% reduction) and black teens (69% reduction). “If you think about education as an equity issue, we had some progress in changing that gap over the last generation,” said John Farden, associate vice president for US programs at Save the Children. (Christian Science Monitor)

Quote(s) of the week. The just-departed Nobel-winning novelist Toni Morrison once said, “Make a difference about something other than yourselves.’’ She also said, “Just remember that your real job is that if you are free, you need to free somebody else.” Rest in power.

I’ll leave you with this placid, shady image of trees from Big Cypress National Preserve in Florida, via the Interior Department’s Twitter account. Have a thoughtful, purposeful week ahead.