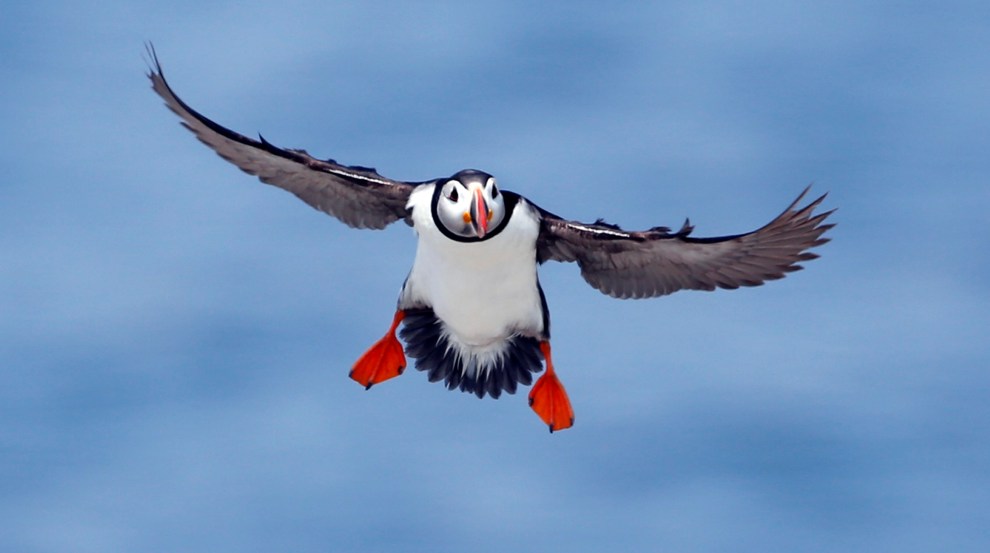 They’re increasingly vulnerable, threatened by warming oceans, predators, and a fluctuating food supply. But this summer, the waddling, colorful Atlantic puffins, known for their orange-red beaks, have feasted on plentiful haddock, hake, and herring off the Maine coast—and nested nonstop. “This is a good year,” National Audubon Society scientist Dr. Stephen Kress told the Associated Press.

Kress said the number of puffin nests on two of Maine’s remote islands may have surpassed last year’s 750. In a sign that the seabirds are in good condition, many puffins also laid eggs slightly early this year, he said.

Similar optimistic reports have come from the birds’ much larger colony on Machias Seal Island on the US-Canada water border, home to 5,000–6,000 pairs. More than half of the eggs will produce a successful chick, said biologist Heather Major of the University of New Brunswick. “There were lots of puffins around this year,” she said.

The puffins, once hunted by people, had nearly disappeared from the Maine coast before a program to reintroduce them began in the 1970s. Since then, more than 500 Audubon Society interns have helped out in the summers as the colonies have grown, Kress told NPR. The most important lesson, he said: People can nearly kill a species—but they can also help bring it back.

Coming to his rescue. She was an “awesome lady,” Antonio Basco said of his wife, Margie Reckard. She also was the only family Basco had. When a racist shooter on August 3 killed her in the Walmart massacre in El Paso, Texas, Basco decided to invite the community to her funeral. More than 1,000 flower arrangements flowed in. Hundreds of people showed their respects on Friday (this video shows the line). One of them, Lucy Flores, 72, said she was going to make burritos for Basco and other mourners. “They’re green and red burritos. It’s not much,” she told the Dallas Morning News. “But it’ll be done with much love. I hope he likes them.” Thanks to colleague Grace Molteni for the tip. (KVIA)

Found: Another “lost” Coltrane album. Saxophonist John Coltrane pushed toward a limitless creative horizon. Back in 1964, French Canadian director Gilles Groulx had tracked down the jazz leader and his quartet to provide a soundtrack to his film, Le chat dans le sac (The Cat in the Bag). The Coltrane recording session that June, previously unknown to his fans, makes up Blue World, which will be released on September 27. Last year, Both Directions at Once: The Lost Album, recorded by the quartet in 1963, gave Coltrane his first-ever debut on the Billboard 200, a half-century after his death. “There is never any end,” Coltrane once said. “There are always new sounds to imagine; new feelings to get at.” (NPR)

Reunited, thanks to a journalist. China determined that a woman had too many daughters, so family planning officials took one of two twins and “sold” her to an unwitting American family. Los Angeles Times journalist Barbara Demick told the story a decade ago, but at the American family’s request, she did not identify the American side of the family. In the intervening years, one daughter, now 18, wanted to find her twin, and the adopted mom wanted to help, so Demick went with them to China. The families spent a week together. The adopted mom told the birth parents, “I would never have adopted her if I knew she was stolen from you. It gives me pain knowing that my gain was your loss.” The birth father responded, “I am grateful to you. I can see that you raised her very well.” (Los Angeles Times)

Standing up. Here are three mini-Recharge stories to discover: The 9-year-old kid who brought cheer to a major league baseball player mired in a dreadful slump. The library system that repudiated its anti-union steel magnate namesake—and voted to unionize with the United Steelworkers. The jailed women’s activist in Saudi Arabia who would not lie about her mistreatment behind bars—even if a lie would lead to her freedom.

Which athlete inspired you most? We asked; you answered. Several mentioned Simone Biles, whose electrifying work we spotlighted last week. Others mentioned tennis trailblazer Serena Williams, and two athletes who suffered for their activism: Muhammad Ali and Colin Kaepernick. Reader Wolfram Hartwig suggested cyclist Greg LeMond, adding, “To come back from being almost shot to death, not only barely surviving, but winning the Tour de France (again) in 1989 and 1990 with some shotgun pellets still in his heart lining, all that while being clean, w/o the drugs that the whole next generation of cyclists (think Lance Armstrong and many others) used to improve their performance.” Reader Lynn Keltz makes a closer-to-home pick: “Young children starting out on the way to play a sport are most inspiring. Whether they are picking dandelions in the backfield while they wait for something to happen or are seeing that they really can hit a line drive, complete a pass or score a goal, they are in the moment and enjoying life.”

I’ll leave you with this image by Haji Mahmood at Colorado’s Great Sand Dunes National Park and Preserve, via the Interior Department’s Twitter feed. Thanks for reading, and have a great week ahead.