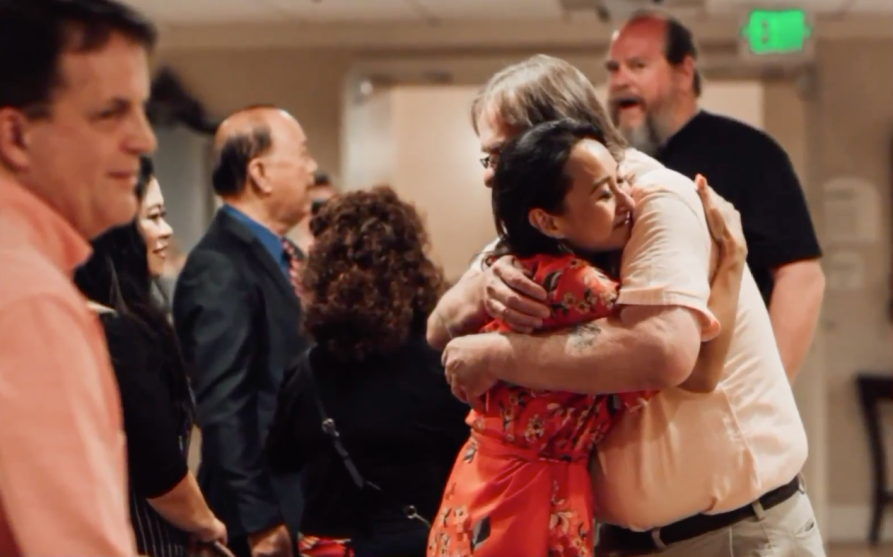 Thao Nguyen and Chip Reichert reunite almost 40 years after a rescue in the South China Sea.WGN-TV

In 1981, the USS John Young spotted a motorless fishing boat filled with people in the South China Sea—and saved their lives. They were without food, without water. That rescue was the first of hundreds for the Navy ship that year. Veterans carried those memories for decades, and recently, a group of those Vietnamese refugees, now US citizens, joined the veterans at a reunion in Mobile, Alabama.

One retired sailor, Chip Reichert, had a gasp of recognition when a girl they’d rescued, Thao Nguyen, now an adult, walked to the podium.

“I want to say thank you,” she told the veterans. “You all made a difference, and what you did mattered.”

Reichert hugged Nguyen, who came to the reunion with her mother, her aunt, and a cousin. “She looked at me, and all we did was cry,” Reichert told WGN-TV. “Twenty minutes of just seriously crying.” She and several family members, all rescued by the Navy ship, had become nurses in the United States, inspired by the kindness of those who’d saved them.

“If I can help someone else, I want to,” Nguyen said, “because I know I wouldn’t be where I am if people didn’t save me.”

Who we are. After a 2018 neo-Nazi rally on Hitler’s birthday in the town of Newnan, Georgia, progressive portions of this fast-growing town came together to resist racism and honor the broad diversity of people living there peacefully. The community commissioned a photographer to create large portraits of its racially diverse residents to put on walls of its buildings—and challenge assumptions about Newnan. The 17 larger-than-life portraits, including one of two Georgia-born Muslim sisters wearing hijabs, opened up public conversations that drove the town to come to terms with residential change. “We need to talk about who lives in our community and, if they are different, why does that make us uncomfortable?” said David Jones II, pastor of Newnan Presbyterian Church. The display prompted the Rev. Jimmy Patterson to take to the pulpit of his First Baptist Church to decry racism and reveal a secret: a family will that once bequeathed enslaved people to him. He read the will from the pulpit, as some in the audience shed tears. Readers, I don’t know about you, but I’d like to see those portraits in person before the installations come down in June. (New York Times)

Buckin’ broncos. She’s 13 years old, 4-foot-10, and 70 pounds, but she’s turning heads in professional bull riding. Najiah Knight, who started riding sheep at age 3, is the only girl on the Mini Bull Riders tour around the country. “I kind of earned the boys’ respect the first year I competed, because I ended up on some of the rankest bulls—I was one of the first ones who came close to riding some of them,” Najiah said. She’s already received a big endorsement from the Ariat boot company. Thanks to colleague Dru Sefton for suggesting this story. (Vogue)

I stuttered; so what? As a kid, he was bullied and humiliated when he couldn’t get his words out. Chesley “Sully” Sullenberger III worked hard to transcend his stuttering, and his voice was clear and steady as he safely landed his failing jetliner in the Hudson River in 2009, saving the lives of everyone aboard. Sullenberger was heralded as a hero, played by Tom Hanks in the Hollywood tribute. “A speech disorder is a lot easier to treat than a character defect,” Sullenberger writes. “You become a true leader, not because of how you speak, but because of what you have to say—and the challenges you have overcome to help others. Ignore kids (and adults) who are mean, or don’t know what it feels like to stutter.” (New York Times)

Recharge salutes: Doris Miller, a Navy hero at Pearl Harbor who, almost 80 years later, will have a $12.5 billion aircraft carrier named after him; 6-year-old Owen Colley, who has raised more than $260,000 to help animals affected by bushfires in Australia by making and selling little clay koalas; a community in Newfoundland that got behind a third grader named Yaman, originally from Syria, teaching him how to skate and giving him money for hockey gear. Yaman chose tape with the design of a maple leaf for his hockey stick because he wanted the Canadian flag close to him, wrote journalist Muhammad Lila.

I’ll leave you with this wintry sunrise at Maine’s Moosehorn National Wildlife Refuge, via the Interior Department’s Twitter feed. Have a great week ahead!

Jaw-dropping sunrise that will stop you in your tracks at Moosehorn National Wildlife Refuge. Pic courtesy of Jerry Rhodes #Maine pic.twitter.com/Jw5cgPhVlz