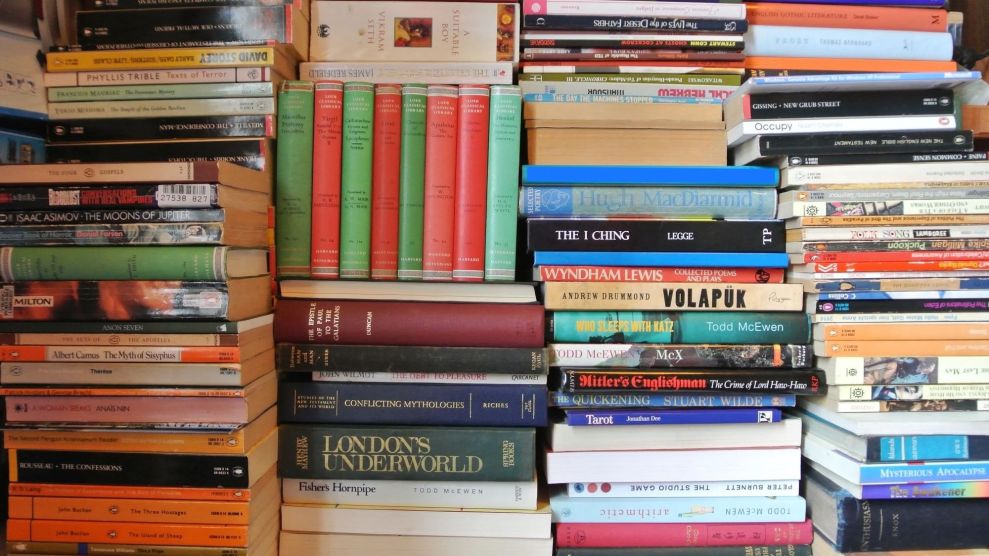 A week ago, Mother Jones asked its newsletter subscribers to send along a few sentences about the best book they read this past year. We were immediately flooded with far more responses than we anticipated written by readers from Charleston, West Virginia, to the Big Island, Hawaii.

Judging from the titles they shared, Mother Jones readers were drawn to three subjects in particular: the pandemic, climate change, and the legacy of American racism. The Premonition by Michael Lewis, a penetrating investigation into the internal workings of the Centers for Disease Control and Prevention when the pandemic began, received the most votes for the favorite book from this year. Other top vote-getters include Crossroads, Jonathan Franzen’s novel about family and Christianity; Braiding Sweetgrass, Robin Wall Kimmerer’s book on botany; Caste, Isabel Wilkerson’s manifesto on race; and The Overstory, Richard Powers’ sprawling novel about trees.

In the end, we received far too many blurbs to fit in one article, but I’ve compiled a few of them below. The comments from our readers were edited for length and clarity.

Death with Interruptions by José Saramago: “Death with Interruptions felt like good pandemic reading following the Covid deaths of my aunt and father-in-law. What happens when death really takes a holiday? The fantasy of a land where no one dies quickly turns dystopian, as politicians, religious leaders, economists, philosophers, hospitals, and even insurance companies grapple with this new normal. Which would you prefer, a magical-realism pandemic of immortality, or the current pandemic?” –Kezia Jauron, San Fernando, CA

The Overstory by Richard Powers: “It demonstrated better than any treatise from an environmental group how vital trees are to the health and well-being of the earth and all its creatures. While the wildfires were raging in the Northwest this year…all I could think of was of all the trees that had gone up in smoke and would never again absorb carbon dioxide. I can’t stop thinking about that book.” —Stephanie Hysmith, Charleston, WV

Such a Fun Age by Kiley Reid: “The dialogue alone is reason enough, but then add clever character development and a nuanced examination of work, race, and class; the perfect book.” – Emma Kallok, Sonoma, CA

Wolf Hall by Hilary Mantel: “Without a doubt, my favorite is Wolf Hall by Hilary Mantel. I had previously read her short story collection, The Assassination of Margaret Thatcher, and admired her style. As a would-be writer with a drawer crammed with portions of a novel, a play, and a memoir, it is important to me to read and learn from great writing. Mantel demonstrated how the Tudor era shaped the modern world by giving birth to capitalism and by suffering the pangs of the Protestant Reformation. Mantel also breathed life into Henry VIII, Anne Boleyn, and, most of all, Thomas Cromwell.” – Susan Wozniak, Easthampton, MA

The Master by Colm Toibin: “A fascinating view of Henry James who always seemed to me to be a stuffy guy who had little humanity in him.” – Judy Ross, Point Roberts, WA

Storm by George Stewart: “As pointed out by reviewers, the book is an early entry in the now growing ‘eco-novel’ category and is a description of a 12-day period of a monster storm that engulfs much of California, particularly the northern part of the state. Other characters are brought in as participants managing the storm’s effects on transportation, flood control, telecommunications, etc…For someone who resides in the Pacific Northwest and has experienced what is now called an ‘atmospheric river,’ Stewart’s novel was completely on point regarding…this phenomenon and encourages one to further develop an understanding of the disasters unleashed in a time of global warming. Well-recommended and topical despite the year of initial publication.” – BJ Bergot, Bellingham, WA

This Is Happiness by Niall Williams: “Perfect in all ways. No one enjoys an adrenaline-filled thriller more than me, but it can’t compete with the skill that allows an author like Niall Williams to portray the truth of the human condition…what it means to be human, what it means to struggle, to love, to grieve and suffer, to be part of a community. There’s not a lot of plot within This Is Happiness, so if readers want a story-driven by action, this will not be it. On the other hand, if you, like me, marvel at the ability of a writer so skillful that they paint with words, then you won’t want to miss this perfectly crafted literary masterpiece. This is the sort of book you buy in hard copy to underline and pass on to people you love (& trust to give it back). I loved every minute I spent inside this book and it almost blotted out the terror I feel about the violence currently encompassing my nation. Highly recommended without reservation.” – Mary Vernau, Austin, TX

The Premonition: A Pandemic Story by Michael Lewis: “This book should be required reading for everyone…it’s the history of Covid-19 and what was really done about it. The writing is phenomenal. I couldn’t put it down.” – Chiara Tellini, Pasadena, CA

The Constitution of Knowledge: A Defense of Truth by Jonathan Rauch: “The beginning of the book is not an easy read, but as one gets into it, it provides an in-depth discussion of the distortion of truth, mis/mal/disinformation, and the alternative facts we see constantly promoted and embraced by groups within our country. It shows that truth and knowledge are vetted through the efforts of many people on both the Left and Right in many disciplines. Some of the discussion took me back to my undergraduate philosophy classes–which at times left me wondering just what is truth—but also used very current examples and issues contemporary to the very recent past in this country.” – Steven Ahrenholz, Cincinnati, OH

Facing The Mountain by Daniel James Brown: “Living in Kauai, I’ve met and talked with a number of American-Japanese citizens who experienced WWII. Many veterans have been hesitant to share, as have many citizens who were interned or severely discriminated against. This book brings the experience into vivid focus. It is tragic in part but is largely the story of an entire generation—and culture—that triumphed over tragedy. This book is one that everyone should read for the history—and there is another reason. Much of it recounts incidents and attitudes that are downright hilarious. There have been times when we were reading this that we have gone straight from tears to laughing out loud.” – Mary Mulhall, Kauai, HI

The Outlier by Kai Bird: “The Outlier is a new biography of Jimmy Carter. It focuses on his early life, his presidential campaign, and his time in the White House. In particular, without giving too much away, some of what was attributed to his success and some of what was attributed to his downfall are shown in enough detail for the reader to make a more clear evaluation. Kai’s father worked in the Carter administration in the Middle East, so that part of the story is particularly good. I will admit that Jimmy is my favorite president, so I had reason to read it. Kai’s writings, including his Pulitzer Prize for the biography of J Robert Oppenheimer, are always good.” – Michael Fenster, Anchorage, AK

The St. Louis Commune of 1877 by Mark Kruger: “It tells a fascinating historical story about a little-known chapter of labor history in which the first general strike in American history led to a major US city being ruled by communists.”– Deborah Benoit, St. Louis, MO

Consumed: The Need for Collective Change: Colonialism, Climate Change, and Consumerism by Aja Barber: “In Consumed, Barber examines the history of textile labor and human/earth exploitation from the onset of American colonialism to the fast fashion industry of today. Barber’s words are smart and compassionate, yet easily digestible, and they inspired me to examine and alter my own participation as a consumer. I hope more people will discover this important book!” – Fran Parrish, Lockport, NY

The Storyteller: Tales of Life and Music by Dave Grohl: “My favorite book this year, hands-down… Grohl uses stories from his childhood to illustrate how he developed the courage to pursue his dream of being a musician. It didn’t hurt that he had a brilliant public-school-English-teacher mother raising him, who was wise enough to let Dave drop out of high school to start touring as a musician because he was already that good.”– Sheila Jenca, Los Angeles, CA

If you want to sign up for the free Mother Jones Daily newsletter, go to this link and enter your email.