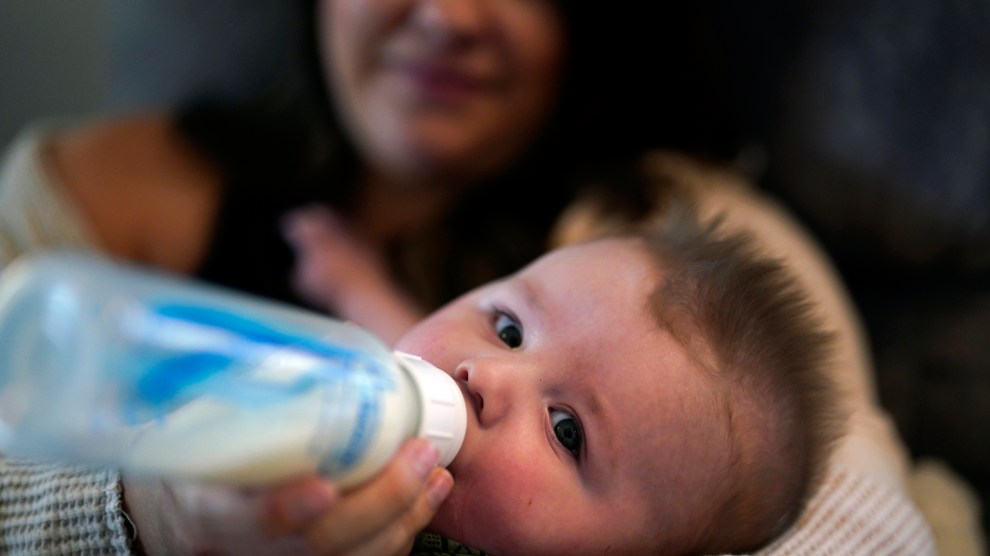 Amid a worsening formula shortage, parents are becoming desperate to provide their infants with the nutrition they need. That’s tricky: Before they’re about six months old, babies can only digest formula or breast milk as food, and they can’t have cow’s milk or plant milks until they’re a year old. Not every parent can provide breast milk, and the American Academy of Pediatrics and the Food and Drug Administration warn that homemade formula can be very dangerous for babies—it can cause severe digestive problems and even transmit bacteria that their developing immune systems can’t handle.

Yet despite these clear warnings, natural lifestyle influencers are promoting homemade formula recipes online. One group that is particularly vocal on this front is the Weston A. Price Foundation, a holistic nutrition organization that advocates a diet rich in dairy and red meat. In addition to its food activism, Weston A. Price has also distinguished itself during the pandemic with a slew of posts and articles claiming that Covid was actually caused by 5G wireless technology and that it’s “not contagious.”

Earlier this week, Weston A. Price’s Instagram account posted a photo of baby bottles with this caption:

We’ve seen reports of parents frantic to find commercial infant formula as they face empty shelves. We have nutrient-dense, homemade baby formula recipes available for free that have successfully nourished babies for over 20 years! Click on the link in our bio and share this resource with anyone in need!

When I asked Weston A. Price founder and president Sally Fallon Morell if she knew that medical groups and government agencies had warned against the use of homemade formula, she said, “Well I don’t know what they expect people to use.” She claimed that her group’s formula recipe was both safe and superior to commercial baby formula, because it contains cholesterol, which she said promotes infants’ brain development. She also claimed that raw milk is safe. (The CDC says raw milk has been linked to dozens of outbreaks of foodborne illnesses.)

Weston A. Price isn’t the only account promoting homemade formula. On Instagram, I found dozens. One appears to be a weathered sheet of paper from a pediatrician’s office, maybe from the 1950s or earlier. It recommends a recipe that includes karo syrup, basically a version of high fructose corn syrup. Other variations that I’ve seen from natural lifestyle accounts include aloe vera juice, chlorophyll, and molasses.

Some influencers sharing formula recipes (though not Weston A. Price) are also now claiming that conspiracy theory bête noir Bill Gates orchestrated the formula shortage because he backed a company that’s trying to make lab-produced breast milk. (That accusation is false.)

I’ve written a lot about how people get hurt because of health disinformation that social media influencers share. I’ve covered antivaccine accounts, essential-oils peddlers, and placenta-encapsulating enthusiasts. The common denominator in how all of this spreads is desperation—these posts go viral because caregivers feel helpless, and they want to believe in the gloss of naturalness around vaccine detox regimens or oil mixtures that purport to cure autism. The combination of dangerous advice in homemade baby formula posts and parents’ increasing desperation makes this one of the most terrifying strains of disinformation I’ve seen.