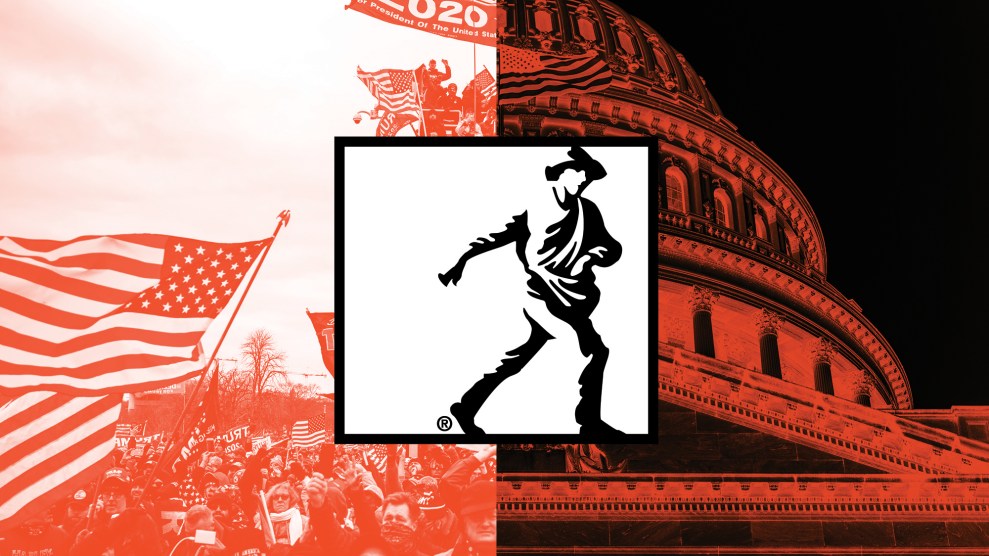 With the January 6 hearings dominating the headlines, publishing giant Simon & Schuster has announced that it will distribute the final report of the congressional committee investigating the insurrection. But there is something odd about the Simon & Schuster announcement: This edition of the report will come with a foreword from Darren Beattie—a former Trump speechwriter who was fired from the White House for attending a conference that is popular with white nationalists. More recently, Beattie has spread pro-Trump, far-right conspiracy theories about the attack on the US Capitol.

This version of the committee’s final report will actually be published by a company called Skyhorse Publishing, an independent publisher that has a distribution agreement with Simon & Schuster. Though the report and this foreword do not yet exist, the announcement raises the possibility that Simon & Schuster, one of the top publishing houses in the United States, will be disseminating disinformation about the assault on Congress.

Simon & Schuster, which is currently promoting this version of the January 6 report on its website, says it will simply be distributing the book and won’t be exercising any control over its content. “Skyhorse is a distribution client of Simon & Schuster, not an imprint owned by us,” said Adam Rothberg, a senior vice president at Simon & Schuster, in an email Thursday. “All their editorial decisions, publicity and marketing are made independent of S&S.”

“We do this in the interest of allowing both sides in any controversy to express their views,” Skyhorse’s president told Mother Jones.

In the last year, Beattie—who did not respond to requests for comment—has spread assorted conspiracy theories about the January 6 insurrection. His website, Revolver News, has run stories alleging that far-right extremist groups like the Oath Keepers and the Proud Boys included undercover federal agents who conspired with the government to orchestrate the insurrection. Trump praised the website in a January 2022 statement. “Because of Darren’s work,” the former president said, “Americans aren’t buying into the Unselect Committee’s attempts to smear 75 million (plus!) Americans.”

In June 2021, Revolver wrote, “If it turns out that an extraordinary percentage of the members of these groups…were federal informants or undercover operatives, the implications would be nothing short of staggering.” There was reportedly at least one government informant present in the mob, but to date there is no evidence that the January 6 insurrection was a false flag operation. In a November 2021 interview with Chris Wallace, Rep. Liz Cheney, the Republican vice chair of the committee, denounced the theory, saying “It’s un-American to be spreading those kinds of lies, and they are lies.” PolitiFact named this conspiracy theory and others like it 2021’s “Lie of the Year.”

Another theory pushed by Revolver and Beattie involved Oath Keepers leader Stewart Rhodes, who, Beattie claimed, had not been indicted for his alleged role in the January 6 riot because he had the protection of the US government. “Is it possible,” said one article on the site, “that the Oath Keepers…has been run, in effect, by the United States government itself?” After Rhodes was indicted on charges of seditious conspiracy in January of this year, Beattie appeared on Steve Bannon’s War Room podcast, where he argued that Rhodes’ arrest did not debunk his questions, but rather, lent them more credence.

“I don’t want the regime”—Beattie’s preferred term for the Biden administration—“to trot out this headline of an arrest as some kind of ostensible debunking of the possibility that Rhodes had been protected up to this point on the basis of a relation with the government as a kind of asset or informant,” he said. “The arrest only intensifies those questions.”

One of Revolver and Beattie’s conspiratorial obsessions is former Arizona Oath Keepers leader Ray Epps, who they claim worked with the FBI to instigate the riot. This theory is based on a brief video from January 6 in which Epps whispers something to accused rioter Ryan Samsel, after which Samsel confronts the Capitol police. Revolver and Beattie also point to the fact that Epps was briefly added to—and then removed from—the FBI’s Capitol Riot Most Wanted List without being arrested or charged.

Like other Beattie allegations, this seems to be completely false. On January 8, two days after the insurrection, Epps told the FBI that he had only tried to calm Samsel down and prevent him from antagonizing the cops. Samsel confirmed Epps’ claims later that month. Still, this has not stopped the far right from spreading conspiracy theories about Epps.

Earlier this month, as the rest of the major news networks aired the January 6 committee’s first primetime hearing, Fox News’ Tucker Carlson promoted the discredited Epps conspiracy theory and featured Beattie as a guest. Beattie once more suggested that January 6 was an inside job. “We need to expose the feds for what they’ve done,” he said. He told viewers to go to Revolver, “read our report, and challenge others to do so as well, and tell them to look you in the eye and say that the feds weren’t involved in this.”

“Tell them to look you in the eye and say that the feds weren’t involved in this.”

In August 2018, CNN’s KFile reported that Beattie had been fired from the White House after it was revealed that he had attended the H.L. Mencken Club Conference, an annual gathering frequented by white nationalists, the weekend before Trump’s election in November 2016. Beattie gave a speech at the conference entitled “Intelligentsia and the Far Right,” which argued that a new, far-right intelligentsia would replace the movement conservatism that dominated much of 20th century conservative thought. Other attendees at that year’s conference included John Derbyshire, a deeply racist English writer who was fired from National Review for an essay he wrote telling white and Asian parents to warn their children that Black people posed a danger to them; Peter Brimelow, an English writer described by the SPLC as a white nationalist (a label Brimelow disputes) who found the anti-immigrant website VDare; and Robert Weissberg, a former National Review contributor. In 2012, National Review announced it would no longer publish Weissberg after discovering that he had “delivered a noxious talk about the future of white nationalism.”

After Beattie left the White House, he worked as a speechwriter for Rep. Matt Gaetz (R-Fla.). In November 2020, after he lost the presidential election, Trump appointed Beattie to the Commission for the Preservation of America’s Heritage Abroad, a body that identifies and preserves historic sites in Europe, including ones related to the Holocaust. He was fired by the Biden Administration in January 2022.

Skyhorse Publishing has published books on everything from jewelry-making to communing with deceased pets. It has also established itself as a major peddler of books alleging conspiracy theories. Last year, it published Robert F. Kennedy Jr.’s The Real Anthony Fauci, a book that accused Fauci of “cracking down on HCQ [hydrochloroquine] to keep COVID-19 fatalities high” and of “deliberately derail[ing] America’s access to lifesaving drugs and medicines that might have saved hundreds of thousands of lives.” It has also published several works by various Trump associates, including Roger Stone, who claimed in his book The Man Who Killed Kennedy (co-authored with Mike Colapietro) that Lyndon Baines Johnson arranged the murder of JFK. This summer, Skyhorse will publish Paul Manafort’s Political Prisoner, in which the former Trump campaign chief paints himself as a victim of a far-reaching government conspiracy.

Reached by email, Skyhorse president Tony Lyons defended the company’s decision to commission Beattie for its introduction to the January 6 report.

“We do this in the interest of allowing both sides in any controversy to express their views,” Lyons said. “This is consistent with our desire to support freedom of speech. We published The Case Against Impeaching Trump by Alan Dershowitz and The Case for Impeaching Trump by Elizabeth Holtzman. Readers are intelligent and will make their own determinations as to which argument is stronger.”