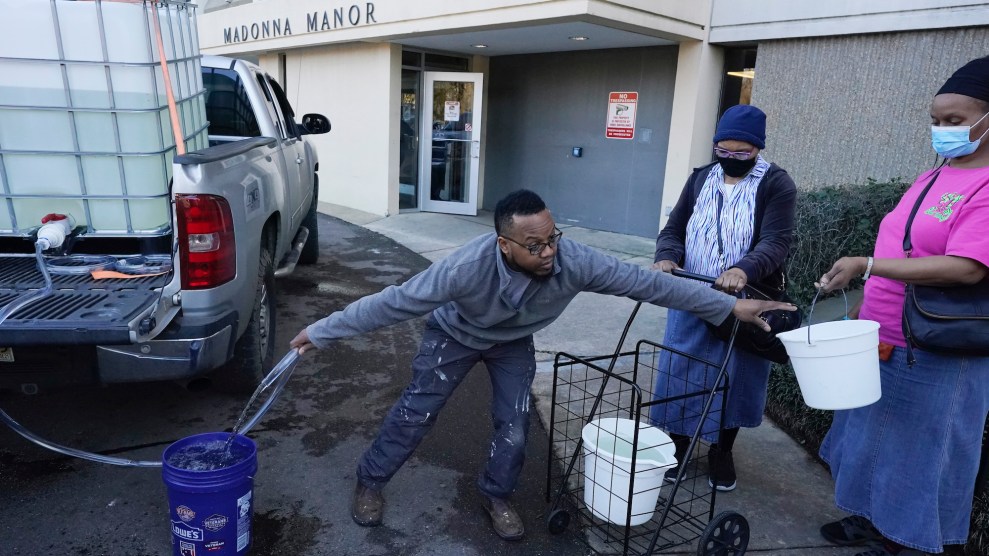 On February 13, a winter storm hit Jackson, Mississippi’s water supply, bursting or damaging almost 100 underground water mains as sub-freezing temperatures covered the state. Almost three weeks later, tens of thousands of Jackson’s 170,000 residents still lack clean, running water. Jacksonians are lining up for city-provided water distribution at local high schools and churches, awaiting an official announcement on when full water service might be restored. As late as Monday evening, the city reported 35 outstanding repairs to its water system. “This is an old system and we are taking it day by day as it recharges itself,” officials announced on Facebook.

When the storm first reached Mississippi, Gov. Tate Reeves told local NBC affiliate WLBT that the state was working to have a federal disaster declaration approved. But most of Mississippi has now restored water and power, with many of the remaining breakdowns concentrated in Jackson, the state’s largest city.

More than 80 percent of Jacksonians are Black. Over a quarter live below the federal poverty line. The parallels to the water crisis in majority-Black Flint, Michigan—where, for nearly four years, authorities failed to address extreme lead contamination in the city’s water system—are unavoidable. And it’s not just Flint: water contamination in Black communities has gone ignored by GOP governments from Louisiana, where residents of towns like St. Joseph and Campti warned of poisoned water for years, to Texas, where little has been done to build reliable water systems for people living in low-income border communities.

In 2018, Mother Jones’ Rebecca Leber spoke with Michigan journalist Anna Clark, who traced similar crises to an urban tax base decimated by waves of white flight. Many mid-20th-century white urbanites, spooked by desegregation orders, found moving to the suburbs far less scary than letting their kids share desks with Black students. Around the same time, federal investment programs started to subsidize homeownership and the highway system, making the move more appealing than ever—and driving massive disinvestment in the cities they left behind. The outcome: across the country, rings of new suburban infrastructure surround crumbling power, water, and gas networks used mainly by people of color.

That phenomenon played out in Jackson, too. Sadik Khan, a professor in Jackson State University’s department of civil and environmental engineering, pins the problem in part on the many people—like himself—who work in Jackson but live in surrounding areas, funneling tax dollars away from the city.

“The city is not earning much [of the] money that is needed to do the maintenance of the 100-year-old infrastructure,” Khan says. Jackson Mayor Chokwe Antar Lumumba said in a press conference Sunday that key improvements to the water system would cost about $2 billion, an estimate that’s more than six times the city’s annual budget. Unlike in Texas—where recovery efforts have been more robust—FEMA hasn’t been activated in Mississippi, making the state’s National Guard the main source of outside help with water distribution. (Although close to 400,000 residents of North and Central Texas still lack running water, all major cities had their boil-water advisories lifted more than a week ago.)

That $2 billion estimate is likely correct, according to Khan, who explains that the breaks and leaks in Jackson’s water supply were brought on by pipes cracking and deteriorating over long stretches of time. Fixing it would require an expensive, systemwide overhaul: pipe replacements, cutting into roads, and paying for safety measures to carry it all out. (Similar repairs weren’t completed in Flint until the state and federal governments set aside hundreds of millions of dollars to make them possible.)

“I can feel how challenging it would be for the city maintenance engineers to manage the system over there, because you just have to balance it out every time,” Khan said. “You have a very big system. This can sometimes have a cascading type of problem: you fix one problem, and another pops up.”

“Our system has basically crashed like a computer and now we’re trying to rebuild it,” Jackson Public Works director Charles Williams said at the city’s Sunday press briefing. One of the hardest-hit areas is south Jackson, where Williams said the city has applied a short-term fix by opening fire hydrants, helping water flow to the areas of lowest pressure. “We’re not happy until we can restore water service to every single last person in this city,” Mayor Lumumba said at the briefing.

Other city leaders have coaxed residents along with hopeful messages. At a city council meeting Tuesday, council president Aaron Banks commended residents’ efforts to help one another.

“We rise to the occasion. We are Jackson and we are strong,” Banks said. “And yes, there is much business that we have to take care of. The hope that I think we all have is [for] the greater good that comes when we unify.”