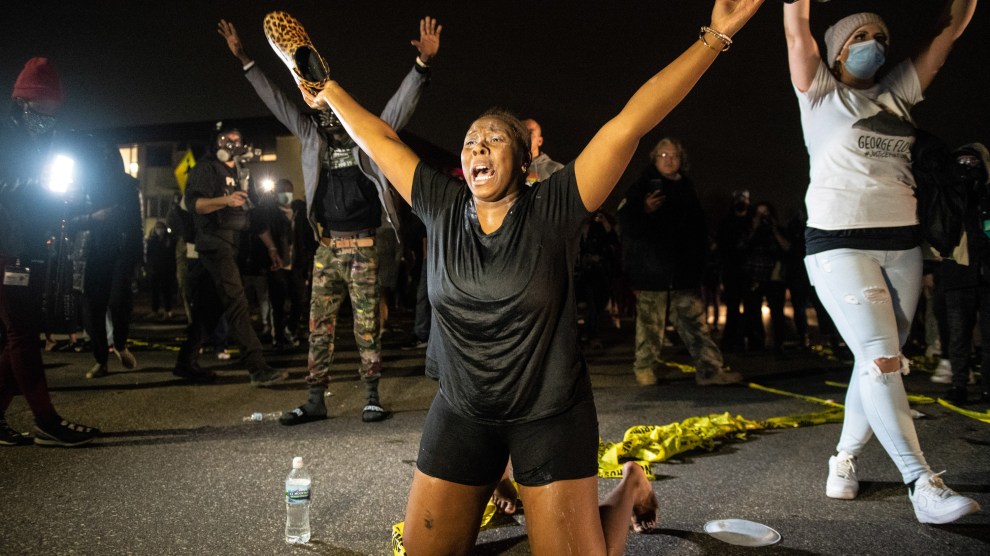 Before leading a discussion of his infrastructure plan in the Oval Office on Monday, President Biden took a moment to acknowledge the death of Daunte Wright, the 20-year-old Black man whom police shot during a traffic stop in a Minneapolis suburb on Sunday.

“I haven’t called Daunte Wright’s family, but my prayers are with their family,” Biden said. “It’s a really tragic thing that happened.”

An officer shot Wright in what police are calling an “accidental discharge.” In video released by the department, an officer yells “Taser!” multiple times before firing her gun. “Holy shit, I just shot him,” the officer says. “It is my belief that the officer had the intention to deploy their Taser, but instead shot Mr. Wright with a single bullet,” Chief Tim Gannon of the Brooklyn Center Police Department said.

Wright was reportedly stopped for traffic violations. Police chose to arrest him because of an existing warrant, according to the New York Times.

As my colleague Madison Pauly reported, the suburb’s police department works with the private company Lexipol, “which sells policy handbooks and training modules to police departments across the country.” Critics have pushed back against this practice:

According to the company, the policies it drafts for police—including those that govern the use of force—are based on “best practices,” court precedent, and federal and state laws, and police departments are encouraged to customize them.

But some experts criticize the policies for being overly permissive or vague, giving officers as much latitude as legally possible. And that’s by design. “One of our secret sauces, so to speak, is rarely if ever will you see the use of the word ‘shall’ in our policies,” Bruce Praet, an ex-cop and one of Lexipol’s founders, said in a 2019 webinar. “Nothing in police work is black and white except the car you drive…So policies need to be flexible.”

Biden called for a “full-blown investigation” into Wright’s death to determine the officer’s intent. “In the meantime,” he said, “I want to make it clear, again, there is absolutely no justification…for looting.”

Biden’s remarks, though tempered, stand in contrast to former President Trump’s refusal to address the killing of George Floyd in the months after he died under the knee of then-officer Derek Chauvin, even as protests against police violence erupted across the nation. Instead of addressing racism in law enforcement, Trump tended to call for more policing, often repeating—and tweeting—the phrase, “law and order.” In a Minneapolis courtroom near where Wright was killed, Chauvin’s trial is ongoing.

“We do know that the anger, pain, and trauma that exists in the Black community in that environment is real,” Biden said. But until a thorough investigation takes place, “I’m calling for peace and calm.”