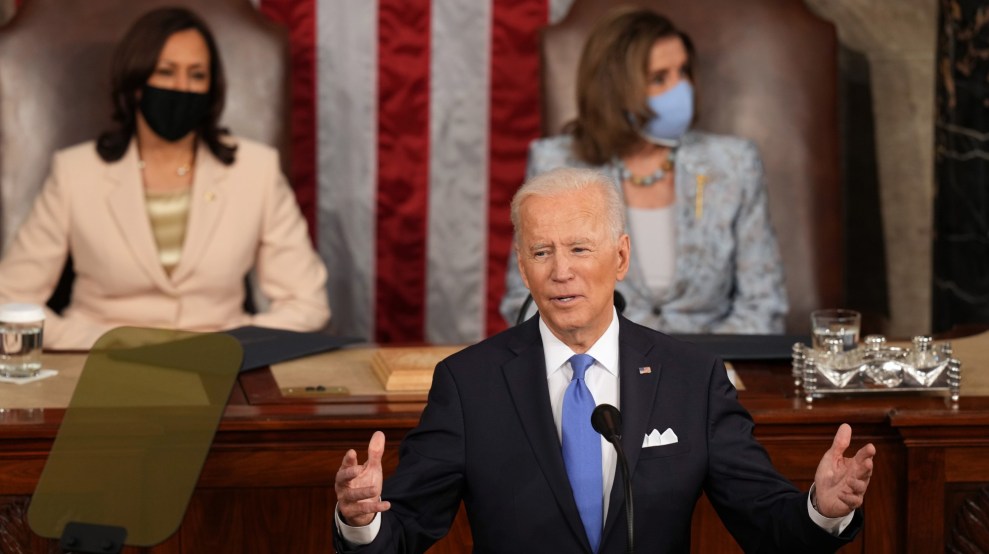 Congress gave George W. Bush approval to invade Iraq in 2002 and, for the better part of two decades, lawmakers have shown little interest in repealing it, even as presidents from both parties widen the scope of that approval far beyond Iraq’s borders. Presidents now regularly initiate conflict without congressional approval and legislation like the 2002 AUMF—or “authorization for use of military force”—is a major reason why.

But Democrats in Congress hope to put the genie back in the bottle. The House voted Thursday 268-161 to repeal the 2002 declaration, sending the matter to the Senate, where it faces its best chance of success in years. All but one Democrat supported the measure, and 49 Republicans voted in favor.

“Congress has for so long failed to do its most basic functions of oversight and responsibility in exercising its war powers,” says Stephen Miles, executive director of Win Without War, an advocacy group that supports the repeal effort. “Anytime it’s doing something in that vein, it should be commended.”

Lawmakers like Rep. Barbara Lee (D-Calif.) have long pushed to roll back the president’s war powers, but rarely have these efforts gathered much support in Congress. Part of the problem was the tendency for presidents from both parties to lean on the legislation as an ostensible legal justification for initiating conflict in the Middle East.

The United States declared the Iraq War over in 2011, but the AUMF lived on, serving as a legal rationale for Barack Obama’s campaign against the Islamic State and Donald Trump’s decision to assassinate a top Iranian general. Trump’s presidency lit a fire under Democrats, who voted twice to repeal the 2002 AUMF in the House, but those measures failed to clear the Republican-controlled Senate.

This year, Lee and Sen. Tim Kaine (D-Va.) spearheaded a parallel effort to finally put the 2002 AUMF to bed. Its chances of passing the 50-50 Senate are not extraordinary, but House Democrats are confident enough in its success that, for the first time, they are unveiling the declaration as a standalone bill, instead of an amendment to the annual defense policy bill.

“In Washington, the 2002 AUMF has become somewhat of a zombie—an authorization that has long outlived its purpose yet still lurks among U.S. laws and poses a danger to the country’s interests,” Lee and Kaine wrote in a joint op-ed for Foreign Policy. “We owe it to U.S. troops to ensure military action is in the national interest before Congress continues to send them into harm’s way using outdated justification.”

One element working in favor of the repeal effort is—surprisingly—the Biden administration. A White House statement said the repeal “would likely have minimal impact on current military operations,” a statement that gives Senate Democrats room to support the bill while also indicating the volume of options available to a modern president to conduct war without oversight.

Another benefit: the bill’s potential to attract Republican support. It’s already been approved by 49 House Republicans, and in the Senate Kaine’s effort is supported by Republicans such as Todd Young (Ind.), Chuck Grassley (Ia.), Rand Paul (Ky.), and Mike Lee (Utah). Conservative groups like the Koch Brothers-backed Americans for Prosperity have rallied their political network to the cause alongside left-leaning groups like Win Without War.

A successful repeal would signal a bipartisan commitment to reining in presidential war powers, but the effect would still be mostly symbolic. When Biden ordered airstrikes on an Iran-backed militia in Syria, the White House justified his actions as an extension of his constitutional authority as commander in chief. He didn’t feel the need to reference a congressional authorization, but if he did, he could just have easily leaned on the 2001 AUMF, which the Trump administration believed would justify an attack against Iran, despite the legislation referring obliquely to al-Qaeda and Taliban.

Presidents have a menu of options to pursue conflicts abroad without running it by Congress first. But even if this repeal effort won’t substantively change that state of affairs, it is—as Miles put it—a “no brainer” first step.