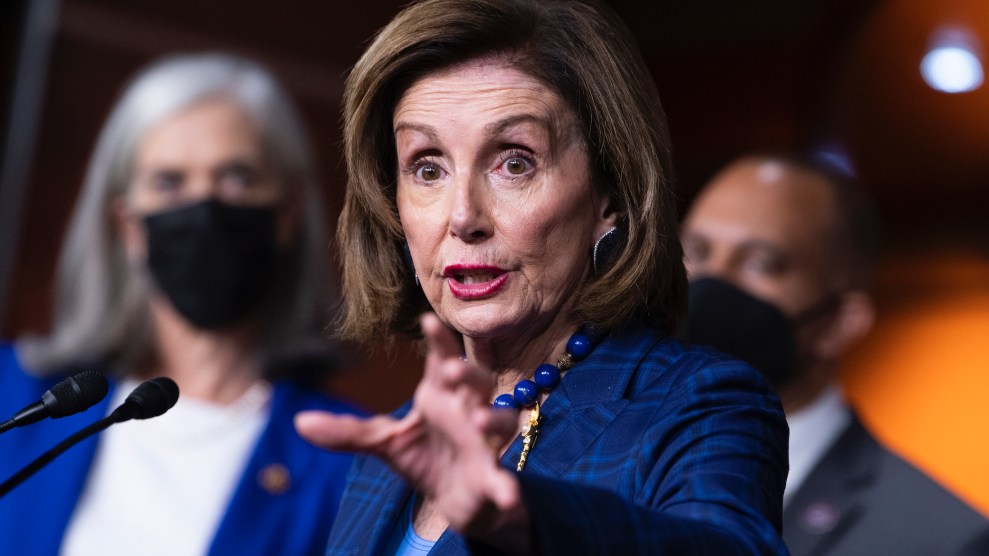 A group of nine House Democrats hailing from the caucus’ more moderate wing is threatening to block a $3.5 trillion spending package until their chamber first passes the Senate’s bipartisan infrastructure bill. The move jeopardizes the White House’s ambitious economic agenda and runs counter to the desires of both the president and congressional leadership.

The lawmakers announced their pledge in a letter addressed to House Speaker Nancy Pelosi on Friday, which was first reported by the New York Times. “The country is clamoring for infrastructure investment and commonsense, bipartisan solutions,” it reads. “We will not consider voting for a budget resolution until the bipartisan Infrastructure Investment and Jobs Act passes the House and is signed into law.” Nearly all of the nine signatories, led by Rep. Josh Gottheimer (D-N.J.), are members of the business-friendly Blue Dog Coalition.

The centrist lawmakers’ demands run counter to the order of operations Pelosi proposed when the White House announced the bipartisan infrastructure deal in June. The House, Pelosi said, would not take up that package until it passed the reconciliation bill, a measure that could pass the Senate with just Democratic votes and has become the center for the party’s wider ambitions such as climate change legislation and child care. She reiterated that plan during a call with fellow Democratic lawmakers on Wednesday. “I’m not freelancing,” Pelosi said, according to Politico. “This is the consensus of the caucus.”

The strategy appeased progressive House members, who had threatened their own rebellion if Democrats did not put their full weight behind a party-line spending bill, one that stands as the party’s last chance to make good on their ambitions before the 2022 midterms. But it also preserved much of the White House’s $4 trillion economic vision that aimed to invest not only in jobs and infrastructure but also social programs such as child care and education. To pass both together, in order words, is to ensure Biden’s legacy.

The letter makes formal a brewing tension that has upended House Democrats’ familiar intraparty dynamics. After the party regained control of the House in the 2018 midterms, Pelosi found herself at odds with her caucus’s left-flank, helmed by Rep. Alexandria Ocasio-Cortez (N.Y.) and her fellow “Squad” members. Democrats had owed their newfound majority to moderate lawmakers who flipped House seats, and much of House Democrats’ agenda during those two years hewed close to the center.

But that was before Biden, who won the Democratic primary with a centrist pitch, faced a once-in-a-generation pandemic and absorbed the popular line items of progressives’ wish lists into his platform as the party’s nominee. The White House formalized those ideas into a pair of economic proposals, the American Jobs and Families Plans. The line items with bipartisan appeal found their way into the infrastructure deal. The rest were sorted into the $3.5 trillion economic package—which also includes tax hikes on the rich.

The sorts of programs and revenue raisers in the budget bill are typically anathemas to the business-friendly Democrats who signed Friday’s letter. The letter, notably, makes no promises that the signers will vote for the $3.5 trillion budget package, even if their demands to take up the infrastructure bill are met.

As I reported earlier this week, despite his image as a centrist dealmaker, it’s actually been the more moderate members of his party who have proven to be a thorn in Biden’s side this year. “On matters of style, Biden sees himself in the moderates,” I wrote, “preferring across-the-aisle dealmaking to partisan warfare. But he’s unwilling to put that style ahead of substance in pursuit of his legacy—a legacy that, for now, is more closely aligned with his party’s left flank.”

Pelosi has led her caucus with an iron fist, bending the ideologically sprawling coalition into submission in service of proving Democrats can get things done. She’s done so by cutting deals—and by cutting down vocal outliers on an as-needed basis. “That’s like, five people,” she said scoffing at the Squad’s influence in 2019. Whether Pelosi will reprise that dismissiveness for her caucus’s right flank is yet to be seen.